#Property Prices Bubble to Frothy All Time Highs as Home sales VOLUMES Hit Fresh 2-year lows in July. Property, Stock, Bond Prices can only go up, right? What Could Possibly Go Wrong? Party Like It's 1929! pic.twitter.com/FX43l8EVvM

US will lack fiscal space to respond when next recession comes

The US economy is doing well. But the next recession – and there is always another recession – could be very bad.

The US Bureau of Economic Analysis estimates that GDP growth in the second quarter of 2018 reached 4.1% – the highest since the 4.9% achieved under President Barack Obama in 2014. Another year of growth will match the record 10-year expansion of the 1990s. Add to that low unemployment and things are looking good.

But this cannot continue forever. Given massive global corporate debt and a soaring US stock market – the cyclically adjusted price-to-earnings ratio is high by historical standards – one possible trigger for a downturn in the coming years is a negative shock that could send securities tumbling.

That shock could be homegrown, coming in the form, say, of renewed inflation or of the continued escalation of the trade war that President Donald Trump has started. The shock could also come from abroad. For example, the financial and currency crisis in Turkey could spread to other emerging markets. The euro crisis is not truly over, despite the completion of Greece’s bailout programme, with Italy, in particular, representing a major source of risk. Even China is vulnerable to slowing growth and high levels of debt.

Whatever the immediate trigger, the consequences for the US are likely to be severe, for a simple reason: the US government continues to pursue procyclical fiscal, macroprudential, and even monetary policies. While it is hard to get countercyclical timing exactly right, that is no excuse for procyclical policy; an approach that puts the US in a weak position to manage the next inevitable shock.

probably something you should see pic.twitter.com/3dalM0yXj2

CHART OF THE DAY: Is Q2 the Earnings Peak? 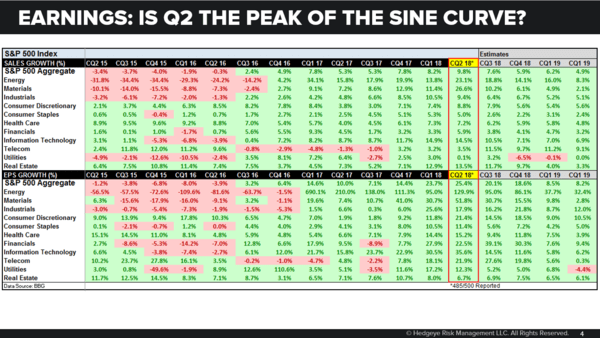