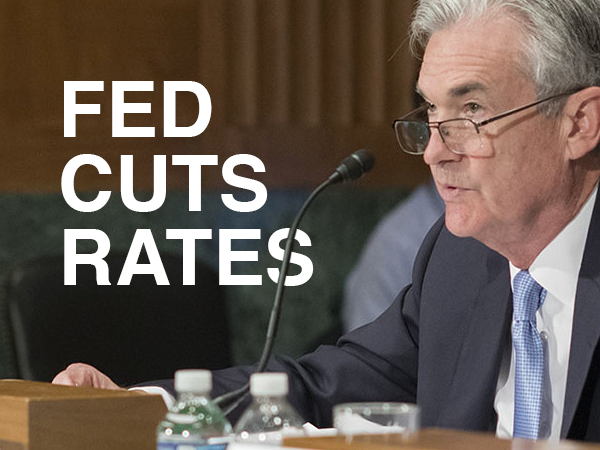 As expected, the Federal Reserve cut rates a quarter point on Wednesday.

CNBC reported on the specifics, saying, “In a vote widely anticipated by financial markets, the central bank’s Federal Open Market Committee lowered its benchmark funds rate by 25 basis points to a range of 1.5% to 1.75%.”

If another Fed rate cut was all that happened, there wouldn’t be much to talk about. But as usual, that isn’t the case here.

The first question that arises is, “Will the Federal Reserve keep cutting rates after nine rate hikes?”

It’s easy to forget that just last year, and for part of this year, the Fed was quite hawkish. Rate hike after rate hikewas executed. In fact, at one point last year, rate hikes were projected to continue well into 2020 according to the Fed’s “dot plot.”

Of course, that projection was way off the mark. Rate hikes have been replaced by rate cuts. Yet, in spite of this about-face, market participants remain unsure of what the Fed will do next. According to the same CNBC article:

While market pricing had been around 100% for a cut at this meeting, traders had seen only about a 25% probability of a move at the Fed’s next meeting on Dec. 10-11, according to CME data heading into Wednesday’s decision.

Even though the next Fed meeting is only 39 days away, future Fed actions remain fairly uncertain.

Over at CNN, their coverage of the Fed’s rate cut highlighted the Fed’s reluctance to raise rates anytime in the near future:

Despite the fact that there is little wiggle room left to cut rates further should the economy suddenly start shrinking, Powell said he doesn’t believe the Fed is about to start raising rates anytime soon.

If the economy does start shrinking (as many are now predicting), there will be very little Powell will be able to do to turn things around. All of which leads to the more important question…

Will a “Confused” Fed Be Able to Maintain a Growing Economy?

About a week ago, we highlighted a Goldman Sachs prediction that the “confused” Fed would end up walking back a key piece of language from their September FOMC meeting.

In their prediction, they claimed the Fed would remove “key language that the Fed ‘will act as appropriate to sustain the expansion.’”

As you can see below, a comparison from CNBC of the actual FOMC meeting statement between September and October shows that’s exactly what happened:

According to October’s revised FOMC meeting minutes, the Fed will “assess the appropriate path” for the Federal funds rate, rather than act to “sustain expansion” towards their now infamous “symmetric 2 percent objective.”

Either way, the Fed’s new direction isn’t working that well on all fronts yet, as the 2-year / 10-year yield curve is tightening again. On October 29, it was 20 basis points. And on the 30th, it tightened to 17 basis points.

This is the same yield curve the Fed swept under the rug last year.

Finally, the rate cuts don’t seem like they will do consumers much good, either. Another CNBC report highlighting how this rate cut could impact consumers stated (emphasis ours):

In anticipation of an economic slowdown, lenders are less inclined to lend moneyand may even charge a higher interest rate to hedge against the risk, according to Richard Barrington, a financial expert with MoneyRates.com. Consumers also likely will earn less interest on their savings accounts and, in some cases, lose buying power over time.

A few different signals point to an economic slowdown, if not a full-blown recession in the near future.

If consumers can’t get credit, can’t get paid interest on savings, and lose buying power when a recession happens, the outlook won’t be good.

Can the “confused” Fed turn this ship around if things start going south? Who knows, but it’s a better idea to be prepared in case the ship sinks.

Now is a Good Time to Get Clarity About Your Retirement

“Printing money” seems to be a worn-out solution to economic woes, and room for more rate cuts is minimal. It’s possible the Fed is running out of answers, and soaring inflation or a major recession could result.

So now is the time to focus and take a few minutes to consider all of the ways you can protect your wealth.

Moving some of your funds into assets like physical gold and silver can be a wise move to protect your retirement against the Fed’s next move, if they have any left.