The Fed Vice Chair says that the Fed will not even think about hiking interest rates until the inflation reaches 2 percent. Meanwhile, the price of gold decreases further. What is exactly happening in the gold market?

Over the last week, several Fed officials spoke publicly with the purpose of convincing investors that their new policy strategy would be positive for the economy. Powell himself testified three times before Congress. However, the most interesting remarks were delivered by Richard Clarida, Fed Vice-Chair.

On Wednesday, he told Bloomberg Television that the FOMC would not even think about hiking the federal funds rate until the inflation reaches 2 percent:

Rates will be at the current level, which is basically zero, until actual observed PCE inflation has reached 2%. That’s ‘at least.’ We could actually keep rates at this level beyond that. But we are not even going to begin thinking about lifting off, we expect, until we actually get observed inflation … equal to 2%.

That’s excellent news for the gold market! Clarida’s words imply lower interest rates for a more extended period. The Fed will not raise the rates until the labor market recovers completely, and the inflation at least hits the Fed’s target, or until it somehow surpasses it for some time. According to the US central bankers, these conditions will not be met until the end of 2023, if not later. The dovish monetary policy of lower for longer means that the real interest rates will likely stay in negative territory, supporting gold, but does not bear any yield. And if the inflation rises, the real interest rates will decline even further.

But still, if this is so positive for the gold market, why the yellow metal price has declined further below $1,900, as the chart below shows? 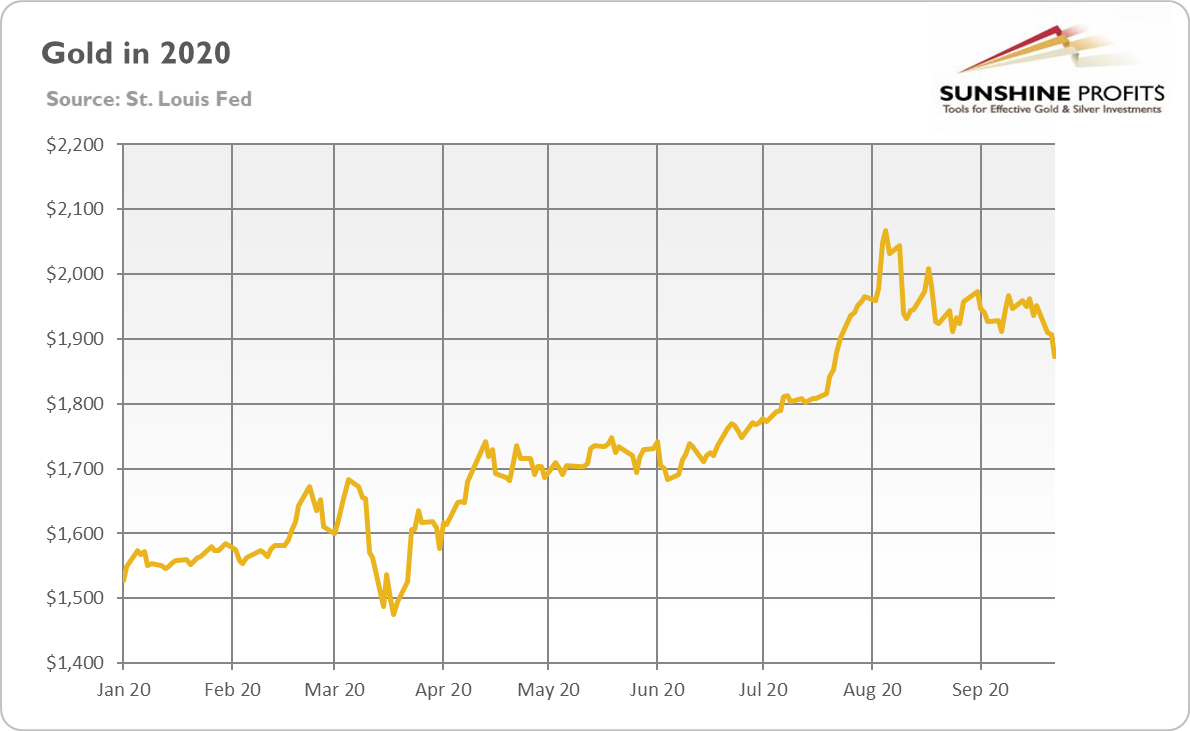 Well, the interest rate policy is only one aspect of the Fed’s standpoint. Another is the asset-buying program – and this is the one area where the US central bank disappointed investors. You see, market participants were upset because the Fed did not announce the bond purchases expansion.

It is an event that saddened precious metals investors. After all, gold benefited substantially from the mammoth growth of the Fed’s balance sheet. But, as indicated in the chart below, already in May, this growth lost its momentum and stagnated further later on. Additionally, since summer, the central bank’s assets have been stabilized at around $7 trillion. 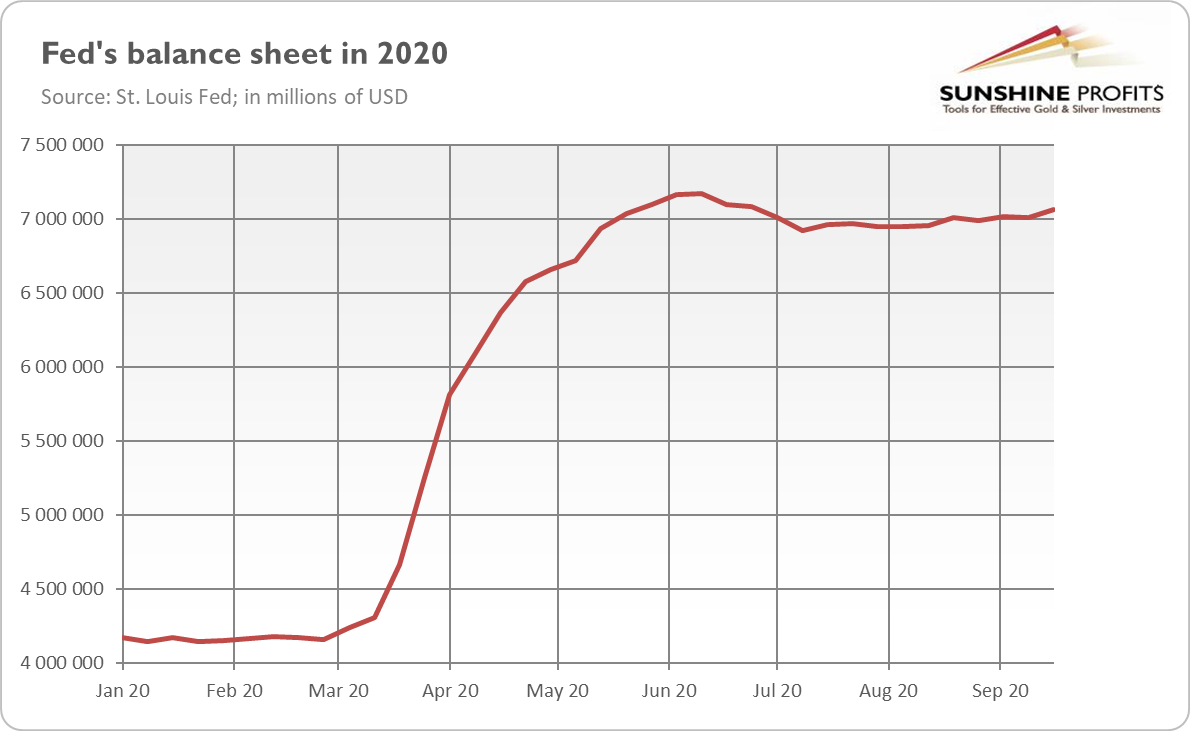 So, to conclude, what does the above mean for the gold market? Well, amid the recession, negative interest rates, rising public debt (last week, the Congressional Budget Office projected that the U.S. federal debt held by the public would balloon to about 195 percent of the US GDP in 2050), easy monetary and fiscal policies and the risk of inflation acceleration, the fundamental outlook for gold remains positive in the long-run.

However, despite that, this fall, we can see more weakness in the gold price. The downside risks include the renewed recession with a rush toward cash, a smooth presidential election, the introduction of a COVID-19 vaccine and related market euphoria, and the lack of additional fiscal and monetary stimuli. Indeed, the current stalemate in Congress over additional aid programs, although negative for the GDP outlook, does not help gold. The lack of freshly issued Treasury bonds also lowers the Fed’s potential to monetize the public debt.

In other words, it seems that the second leg of the bull market in gold will not come into effect unless the Fed expands its assets again or the inflation accelerates, which at the end of the day, it is quite possible, given the broad money supply expansion, the rising federal debt, and the Fed’s new monetary framework.

If you enjoyed today’s free gold report, we invite you to check out our premium services. We provide much more detailed fundamental analyses of the gold market in our monthly Gold Market Overview reports, and we provide daily Gold & Silver Trading Alerts with clear buy and sell signals. To enjoy our gold analyses in their full scope, we invite you to subscribe today. If you’re not ready to subscribe yet, but you are not on our free gold mailing list yet, we urge you to subscribe for it as well for daily yellow metal updates. Sign up today!