In my decade forecast, I projected that in the next recession that the deficit would climb to over $2 trillion. Clearly, that demonstrates I am an optimist. Here’s a chart I shared back in January. 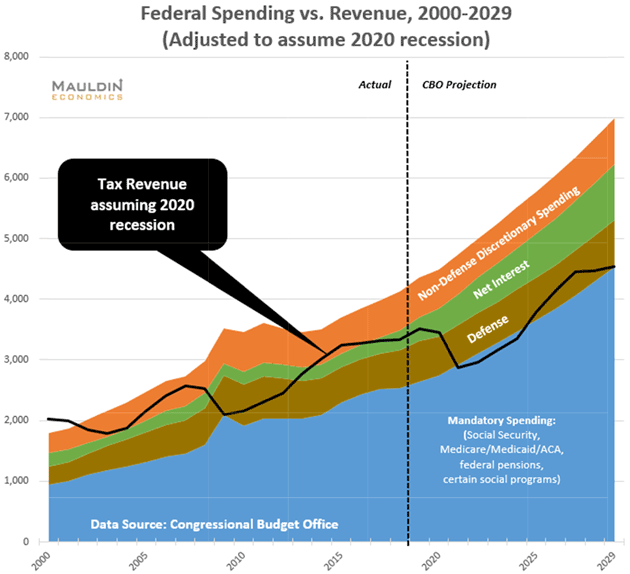 Between reduced tax revenues and increased spending, I now expect this year’s deficit will be at least $4 trillion.

I will bet you a dollar to 40 doughnuts that we will see at least another $1 trillion emergency spending bill to be spent in the third quarter. My logic is as follows.

This transforms the money-value measure, nominal GDP, into an index for quantity of total output.

I wrote recently about the long-ago political decision to include government spending in the GDP numbers. U.S. GDP is roughly $20 trillion a year (using numbers that are easy to divide). That means $5 trillion per quarter.

If the economy falls 20% in the third quarter (not a prediction, but work with me) adding an additional $1 trillion worth of government spending will restore the GDP equation.

The first estimate of that number will come out in late October, shortly before the Nov. 3 election. Both parties in Congress will want to see it positive. Care to bet we don’t see another stimulus package?

I naïvely projected total national debt to be $39 trillion by 2030. See, I keep telling you I’m an optimist.

We are experiencing a practice round for The Great Reset. Sometime late this year or early next, we need to look at what happened and then think what it will look like in the late 2020s.

A number of factors will all converge to give us a true Fourth Turning generational crisis, part of which will be The Great Reset.