Total US births are collapsing and likely to continue falling significantly further over the coming decade(s). However, this isn’t our first rodeo…as total births collapsed during the 1960’s ’til early ’80’s…almost inexplicably against a fast growing childbearing population. And now, since 2007 (and not just a C-virus one off), total births have again collapsed against a growing childbearing population. I will make the case that much of this comes back to the Federal Reserve’s policies to foment stagflation/inflation which have created the birth dearth(s). Young adults (potential parents), like the canary in the coalmine, are among the most economically vulnerable to the Fed fueled asset inflation (with lagging pay increases and little to no assets riding the bubble, at least partially offsetting the rising costs of living). Their determination to delay marriage and children is the ultimate barometer of the US economic wellbeing.

Looking at the US childbearing female population, there is no growth anticipated through 2040, while fertility rates continue tanking due to a slew of economic / pandemic / environmental / overpopulation concerns. The Census continued projections for rising fertility rates and total births is poorly founded. 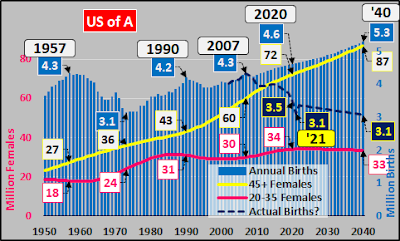 Viewing the year-over-year change in 20 to 35 year-old childbearing females (pink columns), annual births (dashed blue line), and Federal Reserve set Fed Funds rate % (black line). We are looking at two periods of collapsed births in the US since 1950…both in conjunction with significantly increasing female childbearing populations (which of and by itself, should have resulted in flat to rising births). Instead, upon the initiation and continuation of major stagflationary/inflationary interest rate policy changes, fertility rates and total births fell precipitously. 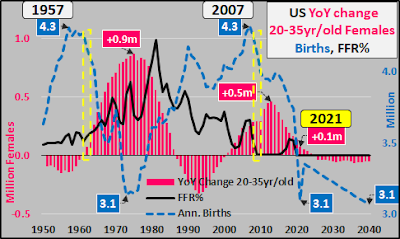 Below, take a gander at US fertility rate (children per females) vs. Federal Funds Rate %. While other segments of the population fared far better thanks to offsetting asset inflation, young adults were not so lucky and chose to delay/refrain from marriage, family formation, and having children. 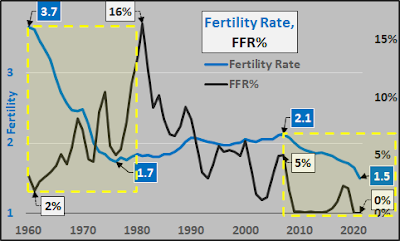 The age of first marriage for both males and females has soared by almost a decade (chart below), while the 30 year’ish window of fertility has not really changed. Females of most species can give birth during 80%+/- of their lifespans. Our species is capable of childbearing during only about 40% of the lifespan (females typically reach menopause by age 50). At age 30, 75% will be pregnant within one year of attempting to do so. By age 40, the odds drop to 40%. Also, risks of adverse outcomes for the child/mother rise dramatically as the mothers age increases. At age 20, 1 in 1,441 births will result in Down Syndrome…by age 45, 1 in 32. Simply put, women are more fertile and births are less challenging on mother and child while women are in their prime childbearing years from 20 to 30…but the current economic system simply doesn’t support this option. 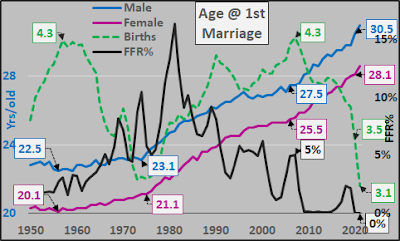 Due to economic / financial pressure, dual-income households have become the norm. The percentage of childbearing age females in the labor force now is nearly double the post WWII situation. Since 2000, females have fluctuated between 65% to 70% labor force participation…well above the 40% seen in 1960 (white line below is raw female 15 to 54 year old employed / population ratio). 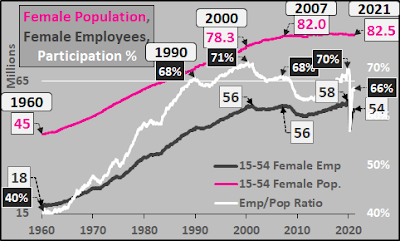 In order to achieve financial strength / independence, the number of women getting secondary educations has soared. As of 2019, a greater percentage of females (36.6%) have four-year or greater college degrees than males (35.4%)…compare that to the pre-war situation of 1940, with 3.8% & 5.5%, respectively. Obviously, the 4+ years of education plus the associated soaring student loan debt has pushed marriage, homeownership, and children to the latest on record.

The average age that a female first marries has soared from 20 in the 1950’s to somewhere beyond 28 years old in 2021. Consider…
-The average age of a mother at first childbirth is now over 26 years old
-The average age of a married mother at first childbirth is now over 29 years old…versus unmarried mothers closer to 24.
-Women with a college education (heavily impacting financial capability of supporting a family) are now approaching 31 years of age before first childbirth versus 24 w/out a college degree.
It’s also important to note that the decline in births is not due to abortion. Total abortions and abortions to live-birth ratio continue to decline from the 1980’s, early 90’s peak. Total abortions are down 50% since peak, and abortion to live-birth ratio is at record low levels since Roe v. Wade in 1973. Still, as of 2018, abortion to live-birth ratio was 189 abortions per 1000 live births…still significant (& massively contentious), but my point is it is a decelerating impact on total births.
Below are the Census projections for births, going back to ’00, ’08, ’12, ’14, and 2017. As can be seen, births continue to massively undershoot the Census projections. Much of the miss can be attributed to bad assumptions regarding Latino immigration rates and fertility rates…which have both been far lower than projected by the Census. The Latino population has normalized to the much lower fertility rates and economic situation than the Census could conceive.

From 2009 through 2020, there were 6.6 million fewer births (-12.5%) in the US (regardless legal/illegal status of the parents) than the Census projected there would be, in both it’s 2000 and 2008 projections. Given the flat childbearing female population, soaring average age at first marriage, and collapsing fertility rates, I’m projecting nearly 15 million fewer births (-30%) over the next decade than the ’00/’08 Census projections.
So What? Ultimately, the most inflationary thing in an economy is population growth and family formation. But the Fed’s policies, although advocating inflation via substituting currency dilution, interest rate mismanagement, quantitative easing, etc., is actually the basis of long term deflation. The merits of a financial system requiring infinite growth against an economic system meant to supply the finite needs of a population (with little to no population growth) should have been debated long ago. Now the economic system is being poked and prodded with stimulus, ZIRP, QE, untold leverage, etc. to synthetically produce growth for a financial system that can be called nothing more than a Ponzi scheme. The faster the substitution of these synthetic proxies (and their asset inflation impacts), the faster the decline in births will be. All of the trends in place to push births lower are accelerating. Whether this is intentional or de facto, I can’t say…but the outcome of collapsing US (and worldwide) births is clear.
See also  New York Times: "Inflation has the potential to drive welcome change for the planet"
See also  Euro-zone inflation is breaking record after record... Inflation forces almost half of Germans to rein in spending
Help Support Independent Media, Please Donate or Subscribe: Trending: Views: 1