via the MacoTourist
Remember all the hullabaloo back in September about the Federal Reserve’s decision to shrink their balance sheet? Believe it or not, it was somewhat of a big deal and many strategists were warning about the lack of support for risk markets from this action.
Here is the actual announcement from the FOMC’s press release: 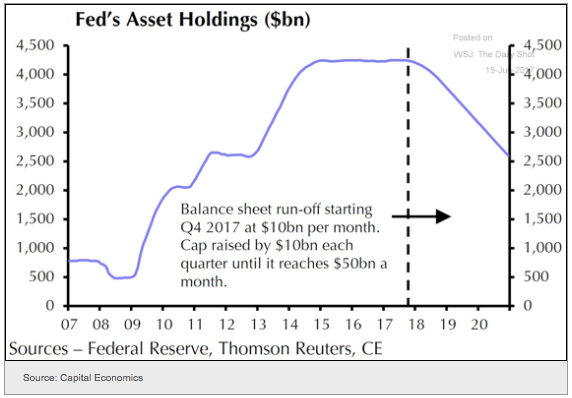 Now as Jim Bianco likes to remind his readers, no modern economy has successfully retracted their quantitative easing program and significantly reduced their balance sheet, so if the Fed actually follows through with their plan, it will be a first.
There’s all sort of hope that both the ECB and the BoJ, will also reduce their balance sheet expansion in the coming quarters. So on a net basis, global Central Banks will go from stimulating through net quantitative easing, to quantitative tightening.
Here is a chart from BofA Merrill Lynch that predicts G4 Central Bank balance sheet expansion will peak in the 1st quarter of 2018 and then gradually shrink. 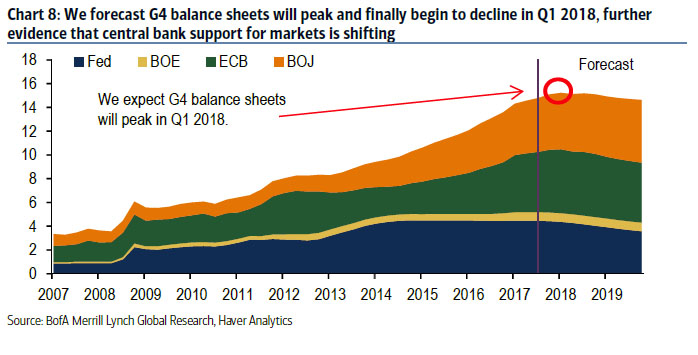 Now you might believe this is a good thing, and shouldn’t affect risk markets. In fact, you might even argue that Central Bank quantitative easing is sending the wrong signal to private sector participants, and its removal will allow the economy to grow on its own naturally. That might be the case, and for those of that persuasion, you can probably stop reading now.
I don’t believe that for one second. Although the US economy is finally standing on its own, there is no doubt in my mind that quantitative easing goosed risk assets higher in the years following the Great Financial Crisis. I still remember the initial days of quantitative easing. I would start trading and then mid-morning the stock market would get a strange bid out of nowhere. For a while I couldn’t figure out why it occurred some days and not others. Eventually, I got the Federal Reserve’s Permanent Open Market Operations schedule (POMO) and noticed a direct stock market outperformance on the days when the Fed was injecting liquidity into the system through bond purchases. I don’t know how it was so direct, but after watching and analyzing the data myself, I am 100% convinced that the Fed’s POMO gave a considerable lift to risk assets.

So if I am so sure that quantitative easing caused risk assets to be bid, why hasn’t quantitative tightening caused the opposite effect? With American stocks running like they stole something, it’s tough to argue there is any relation to the Fed’s balance sheet and US stocks recently. And yeah, for a while I assumed that the ECB and BoJ’s balance sheet had overwhelmed the Fed’s scheduled shrinkage.
But then Franz Lischka wrote this terrific post in his blog My Personal Forward Guidance that illuminated the nuances of the Fed’s balance sheet reduction.

READ  Is This the Fed's Plan to Balance the Books?

As I wrote so often, the Fed’s QT program should be pretty negative for stocks (and high yields) and be pretty positive for US Treasuries. So far, the impact has been limited. BUT, and this may sound like a completely weird statement, I claim that QT, though running for almost 4 months now, has not yet really started. That may sound strange. The Fed has claimed that it would reduce its balance sheets, or rather its security holdings by $10 billion/months from October and $20 billion from the start of January. So, you would expect bond holdings to be down now by almost $50 billion, which would already be somewhat significant. Well, think again. If you would look at the Fed balance sheet and you wouldn’t know that the Fed claims to reduce its size, you just wouldn’t see it. Because instead of what you would expect, security holdings since the end of September are down merely $18 billion instead of the expected $50B (the balance sheet as a whole is down by just $14 billion). Bond holdings are still higher than they were at the end of QE and within the range where they had been ever since (shaded blue area). So, all that fuzz about QT has so far been just noise. Nothing else. 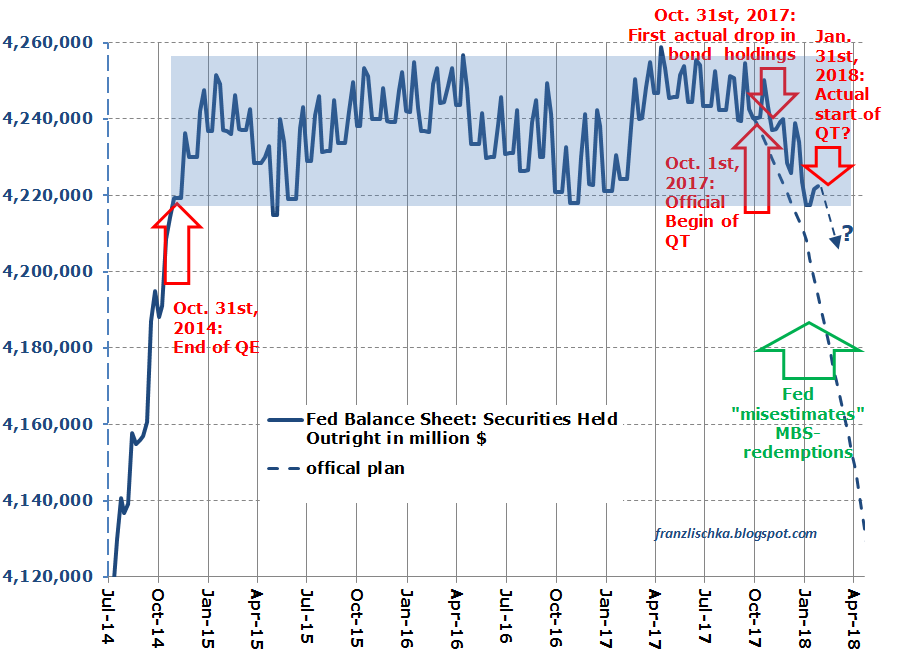 How is that possible? Well, 60% of the reduction should have come from US Treasuries ($6 billion / months in Oct-Dec, $12 billion in January). And here the Fed is actually pretty close to its plan. You just have to know that in the first and last month of each quarter the bulk of US Treasuries expires on the last trading day. Holdings are down 18.4B. That’s because most of the $12B reduction planned for January will occur on Jan. 31st. (Which may become the day when QT might actually start in honest.) The trouble lays with the MBS holdings, which should account for 40% of the reductions. ($4B in Oct-Dec, $8B from Jan). They should now be down by almost $20 billion. Instead they are UP (!!!) by $3 billion!!! Official reason is that MBS bonds usually don’t expire on a planned day, but are most of time redeemed much earlier. (Actually, most of the MBS bonds which the Fed holds have expiry dates in the 2040s. Hardly anything would expire now.) You don’t know when and how much will be redeemed early. So, the Fed relies on estimates. And “unfortunately” the Fed estimated that much more of their holdings would be redeemed than actually where and they therefore reinvested much more than they should have. By such an amount that their holdings actually increased instead of decreased. Sounds strange? Well, for me as well. Especially if that happens not just 1 months, but for 4 months running. And with that QT has still become a non-event even towards the end of its 4th month. That may now change, as the Fed’s Treasury holdings next Wednesday should fall by almost $11 billion, which then would mark the first real noticeable change in the balance sheet. And by a huge coincidence, it would be just in Janet Yellen’s final days. She has successfully started the QT program and presided over it for months. And everything was running smoothly. Do I sound suspicious? Would you blame me if I were?
Anyway, I will look with interest what will happen in the coming weeks. Will we finally see some impact from QT? Like weakening stock prices, rising credit spreads? Stronger US Treasuries and a stronger USD? We will see. And if things will get rough later on, when QT is running at $50B /months (and planned MBS reductions far too high to continuously misestimate their redemptions in such a way that it completely changes the outcome), it will be Powell’s problem, not Yellen’s.

Even though Janet Yellen had scheduled the balance sheet to already be shrinking on her last Chairing of the FOMC meeting, it turns out that the technicalities of running a $4.4 trillion balance sheet do not allow that to be quite as easily accomplished as the Federal Reserve would like. Actually, if they were serious about reducing it, they could execute a POMO that involved a pink ticket instead of a blue one. But nah… That’s never going to happen.
And I must admit, I am partial to Franz’s thinking when he argued that quantitative tightening would be positive for US treasuries. Most pundits think the opposite. They figure that if the Fed is selling treasuries (or not buying as many), then it must be negative for bond prices. But let’s think about quantitative tightening. It’s right there in the name. Monetary tightening should be positive for long term bonds as it reduces the risk of inflation – which is a long term bond holder’s worst nightmare.
Still don’t believe me? Check out this chart of US 10-year yields with quantitative easing periods highlighted. 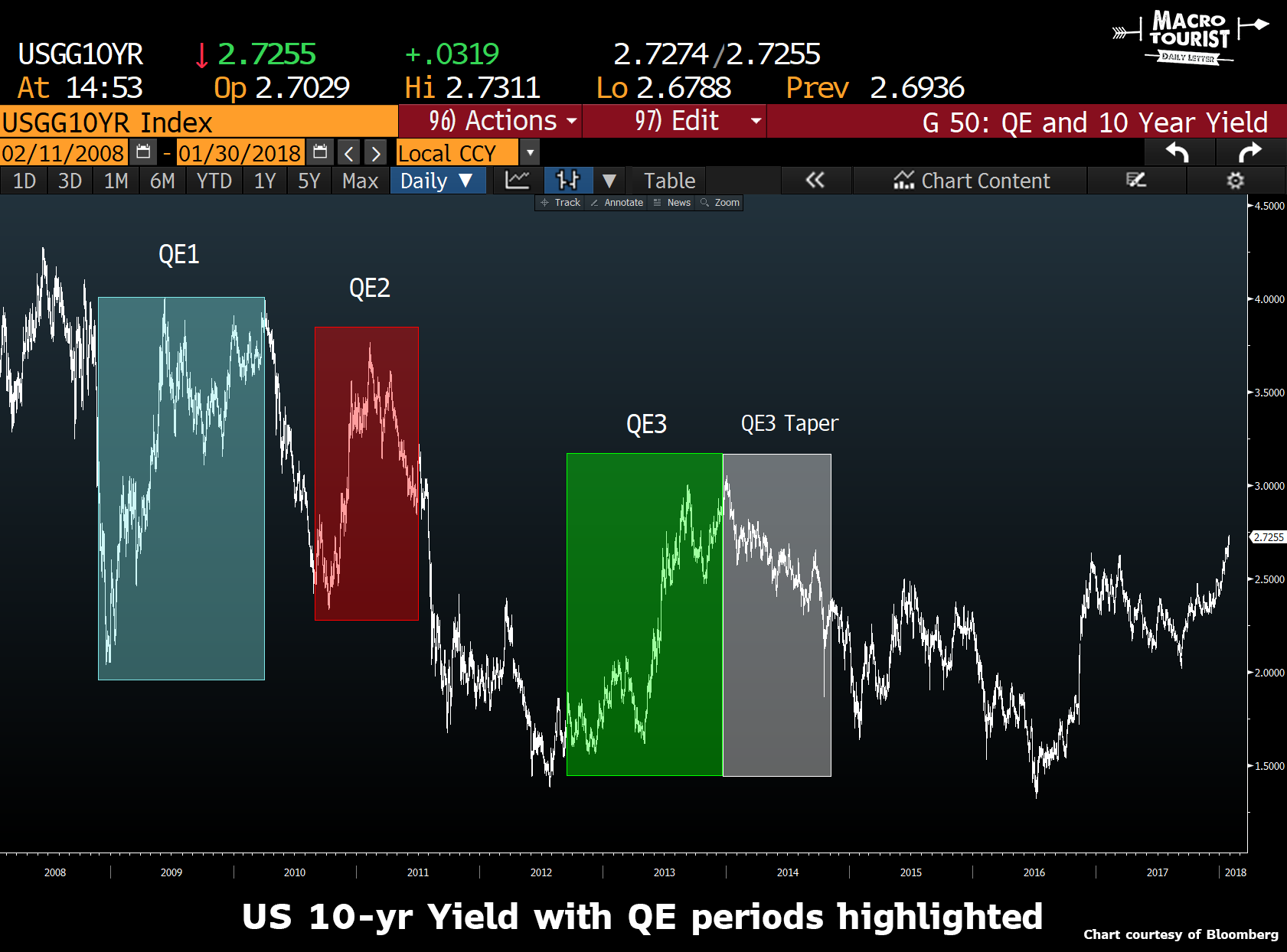 Notice how the QE periods had rising rates? And then as soon as the QE program ended, rates plummeted back down?
Now of course it’s not that simple. There is more that goes into the pricing of rates than whether the Fed is engaging in QE or not. But the direction is clear. QE is bond negative, and I think QT will be bond positive.

READ  Is This the Fed's Plan to Balance the Books?

WHAT DOES THIS MEAN?

I have made arguments that the monetary bonfire might finally be showing signs of igniting. There is no doubt that the amount of monetary fuel poured into the system has the possibility of exploding in an incendiary melt up. And I am not backtracking from that line of reasoning. Yet I am aware that the inflation-is-coming-better-sell-bonds-and-buy-stocks trade is crowded.
And given that the Fed is about to play catchup with their quantitative tightening program, it is probably smart to be on the lookout for a surprise that catches everyone off guard. Now don’t mistake this as a change of heart about Central Banks willingness to inflate or die. That’s going to continue. But from a shorter term trading perspective, it’s likely we are going to see some opposite action for a little while.
Everyone hates the US dollar and bonds, and is completely enamoured with equities. If the Fed finally follows through with some actual quantitative tightening, market participants could be surprised with a reversal of recent trends. I don’t know if the QT will be large enough to affect the markets. But just be open to this possibility. After all, everyone was convinced quantitative easing would never work, yet here we are. Why shouldn’t quantitative tightening have the exact opposite effect?