The market crash in Q1 was a liquidity and re-pricing event.

What investors should be cautious of going forward, is an ongoing set of solvency events, which is a more structural issue.

Some recent history on market bottoms and jobless claims.

Looking for a helping hand in the market? Members of Stock Waves get exclusive ideas and guidance to navigate any climate. Get started today »

Capital markets look like they’re in the eye of a storm recently, with a period of calm after what was one of the most volatile periods in global market history. Does it get better from here, or is this a big fake-out for another round of selling as we move deeper into this year?

What happened in the first quarter was mainly a liquidity storm, and the deeper into this year we get, the more solvency becomes the key issue to be concerned about.

As the economic machine and its associated incomes came to a halt in Q1 of this year, the liquidity storm consisted of countless companies drawing on their revolving credit facilities from banks at the same time to get cash on their balance sheets (a corporate version of a bank run), the foreign sector scrambling for dollars to service dollar-denominated debts (and selling some of their U.S. Treasury reserves to get them), tens of millions of people losing their jobs in the United States and countless more losing jobs internationally, and virtually all markets (Treasuries, credit securities, equities, oil futures, precious metals futures) becoming very illiquid as sellers overwhelmed buyers.

Then, the unprecedented magnitude of fiscal and monetary policy response to this liquidity crisis flooded global markets with liquidity. As part of over $2.7 trillion in crisis aid from Congress, helicopter money checks were sent out to most American households, extra unemployment benefits were provided, small businesses received loans that can turn into grants (although that was one of the logistically problematic programs), funds were provided to various portions of the healthcare system, and bailouts were offered to certain industries. The Federal Reserve funded those fiscal programs by creating dollars ex nihilo and buying record amounts of Treasury securities with those new dollars, and they also bought mortgage-backed securities and set up a special purpose vehicle backed by the Treasury Department and allocations from Congress to buy corporate bonds and municipal bonds with loss protection. In addition, the Federal Reserve set up liquidity swaps with foreign central banks to provide dollars in exchange for foreign currency, which is an attempt to alleviate the global dollar shortage and prevent further foreign sector sales of Treasury securities.

This chart perhaps best sums up the economic shock. It’s the nonfarm payroll number, which shows the 20 million jobs that were lost in April alone: 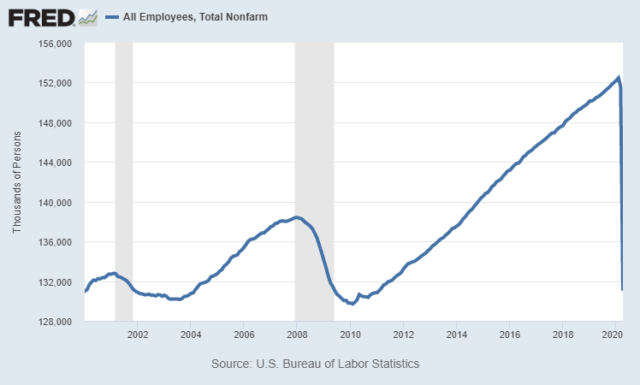 So far China’s recovery looks like a flat swoosh. NB this is an economy that is normally on a growth curve so a flat swoosh is bad news! Cheng Li @BrookingsInst & Jian Chen.t.co/Il02abtbnO pic.twitter.com/SvaUUIkLJy

“History suggests markets won’t escape economic reality, and that this bear market will be similar in length to that of the ensuing recession." -BofA

My US macro model slowed again in May to the lowest lvls since Aug ‘08. It’s a 16 factor model linked to less cyclical areas of the economy. Cycle lows occur ~10% before turning up & switching stages from recession to initial recovery. This represents a significant shift in TAA. pic.twitter.com/IBzgEe2rUz