With the rapid decline in the 10-year U.S. Treasury yield falling below the 3-month rate, a reliable recession indicator is coming into play again.

One day does not make a trend but it is worthwhile to remember that this inversion ran for four and a half months last year and the lag times between this type of inversion and a recession starting has been between 8 and 18 months for the last three recessions. And for two of the three previous recessions (early 1990’s and the Great Recession of 2008/2009) the inversion occurred multiple times before the recession started.

Probably because the Fed has become more accommodative, investors seem to have come down with amnesia that there is a lag between the inversion of the yield curve and the start of a recession. If history is repeated a recession could start sometime this year.

While the just released GDP report shows the economy grew at 2.1% for the December quarter, when you dive into the numbers the report isn’t as strong as it appears on the surface.

The yield curve just inverted — again.Driven by fears of a potential coronavirus pandemic that could cause widespread economic disruption, investment capital sought shelter in longer-term bonds. This flight to safety caused the curve to invert, at least for now.The sages will

The world’s largest bond market looks set for yet another bout of fear-induced trading next week, and this one could drive yields back to the panicky lows reached a few months ago.

Stock Market Downturn Is Going to Get Worse: Ralph Acampora

It is going to get worse before it gets better for the stock market, says prominent technical analyst Ralph Acampora.

‘I think it’s going to be a little deeper. I am looking at 10% maybe a little bit more even.’

A pioneer in the field of price chart-based trading, Acampora told MarketWatch during a Friday interview that he thinks that the coronavirus fears are a catalyst for a market that had gotten too pricey and was due for a substantial pullback.

“The market itself was stretched, which is true, so we were begging for some kind of correction and this is the catalyst,” he said. He is expecting that the stock market will face at least a 10% drop from its recent peak, which would meet the criteria for a bona fide correction held by most market technicians.

The stock market is unlikely out of hot water when it comes to the realities stemming from the coronavirus.

If we accept what is known about the virus, then logic, science and probabilities all suggest we brace for impact.

MacroView: The Fed’s View Of Valuations May Be Misguided

As we have discussed previously, looking at equity yield, which is the inverse of the price-earnings ratio, versus owning bonds is a flawed and ultimately dangerous premise. 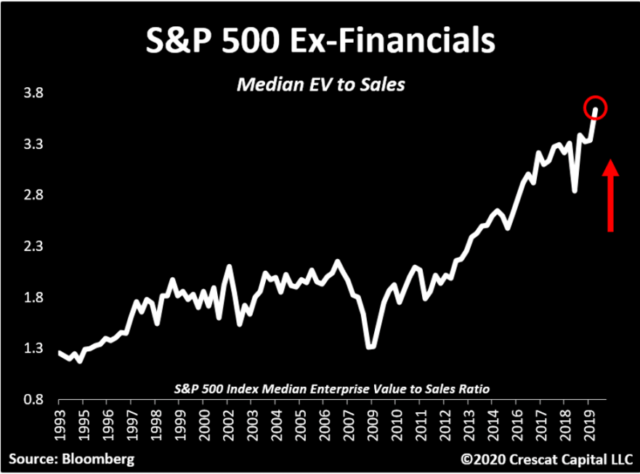