A number of macro dynamics have set up gentrified urban America for a big fall in the coming recession. What does gentrified mean? Gentrified means only the gentry (top 10%) can afford to enjoy the urban amenities as commercial rents and the cost of doing business in desirable urban areas have skyrocketed along with residential rents.

As a result, low-margin businesses have been squeezed out of desirable urban neighborhoods along with lower-income residents. The top 10% is the only demographic who can afford to live in gentrified urban America.

As noted in What’s Really Happening to Retail?, Only Amazon-proof businesses can now survive in brick and mortar. And that quickly boils down to high-cost, high-margin food and drinks–cafes, bars, restaurants– and mega-corporate chains: Walgreens, Starbucks, Chipotle, etc. and smaller chains that cater to the needs/obsessions of the top 10%: fitness centers, etc.

On a per capita basis, America is grossly over-supplied with commercial real estate. But within the desirable urban cores, commercial rents have soared due to the relative scarcity of commercial space. As a result, landlords and property managers are asking exorbitant rents, and many are leaving spaces empty rather than rent them for less.

The net result is desirable urban zones are being homogenized: niche retailers and other small service providers can no longer afford the rents (unless they also own the building) and the only businesses that can afford the nosebleed rents are high-margin food-beverage establishments or corporate chains.

The irony is two-fold: the very diversity and novelty that attracted the top 10% is being eroded, while the reliance on free-spending young wage earners in the top 10% (or even top 5% in pricey urban zones) makes such gentrified urban areas extremely vulnerable to any downturn that trims the population, salaries and bonuses of the top 10%.

Even worse, the vast majority of these high-cost businesses are discretionary:nobody really needs a $5 coffee, $5 bagel, fitness center membership, etc., and buying a couple rolls of toilet paper and some instant noodles at Walgreens ins’t going to generate the per-square-foot sales Walgreens needs to keep the high-rent store in a gentrified urban neighborhood open.

Corporations have been able to pay high salaries and bonuses to top employees because sales and profits have continued marching higher for a decade. Once a recession cuts revenues and profits, corporate managers have no choice but to slash expenses.

All that’s left to slash and burn is the top 10%. First, cut bonuses. Next, move the software-eats-the-world automation up the food chain, and outsource whatever’s still soaking up money in corporate HQ.

In effect, the top 10% is ripe for the disruptions of globalization and automation that have already laid waste to the bottom 90%. Here’s one way this works: Human Resources lays off 20% of the workforce making $100,000 or more, and then hires back some percentage at $75,000 because they know everyone else is laying off the same talent.

See also  Billy Graham - "if God does not judge America, he'll have to apologize to Sodom and Gomorrah"

It’s called over-supply / over-capacity. There’s too many people with PhDs, Masters degrees, JDs, 10 years experience and so on, and not enough slots for everyone who’s overqualified.

And don’t forget, global corporations can’t afford loyalty to anyone or anything except their major shareholders. If someone in Singapore can do a job for half of what it costs in Silicon Valley, NYC, Austin or Atlanta, bye-bye job in high-cost USA.

How much of a decline in sales will it take to sink high-fixed costs cafes, bistros, fitness centers, etc.? I’m guessing a 15% decline in revenues will sink an outsized number of these enterprises, as their fixed costs won’t drop by much while their operating margins will drop into the red (losses).

Greed is sticky, meaning commercial landlords won’t drop their rents enough to be meaningful until bankruptcy is staring them in the face, and by then it’s too late to find any tenants.

Charts: let’s start with commercial space per capita: the US has way too much: 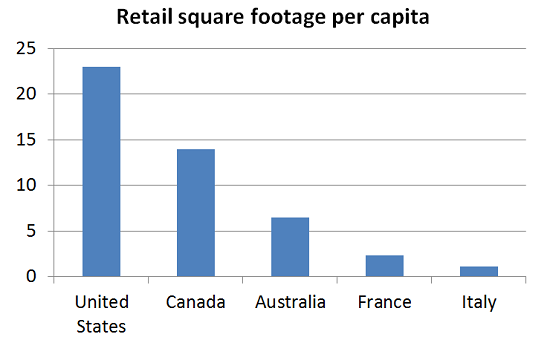 The Creative Class is one way of describing the top 10% of wage earners: 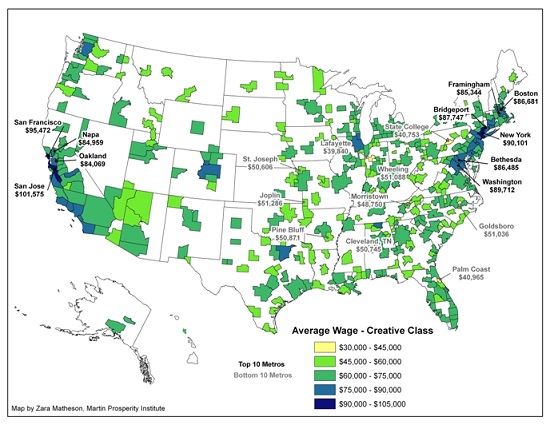 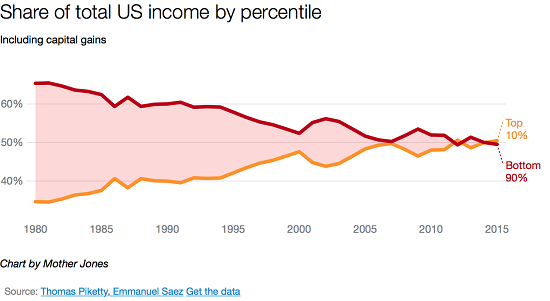 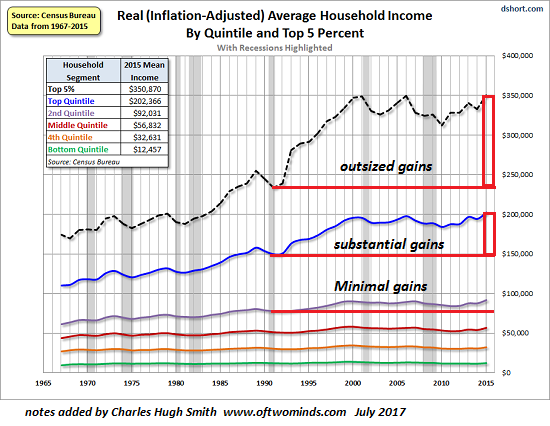