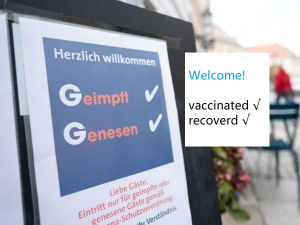 Since the new government will not be officially sworn in until next week, Germany currently has no political leadership capable of taking action. Angela Merkel has already left the Bundestag but will remain in office as Chancellor until her successor, Olaf Scholz, is sworn in next week. This state of power vacuum further destabilizes the country’s political security. For several weeks, unvaccinated people have not been allowed to enter restaurants, museums, movie theaters, or retail stores, even if they present an actual negative covid test. Only grocery stores and pharmacies allow access to unvaccinated people. This has divided Germany’s society.
On November 30, the Federal Constitutional Court will publish its first landmark decisions on constitutional complaints to the federal government’s emergency break earlier this year. The government had imposed drastic restrictions and completely put Germany in lockdown for almost six months. This is another reason why the new government is hesitant and must wait for the decisions of the Federal Constitutional Court to take further actions to reduce current COVID infections. The number of covid infections is increasing faster than last year, even though more than 70% of Germans are now fully vaccinated.
See also  Germany's 10-year Bond Yield Rises Above 0% For First Time Since May 2019; U.K. Inflation Surprises With Jump to Highest in 30 Years. Wage Hikes Zeroed by Inflation
See also  Clownworld Reaches New Levels in Germany
684 views