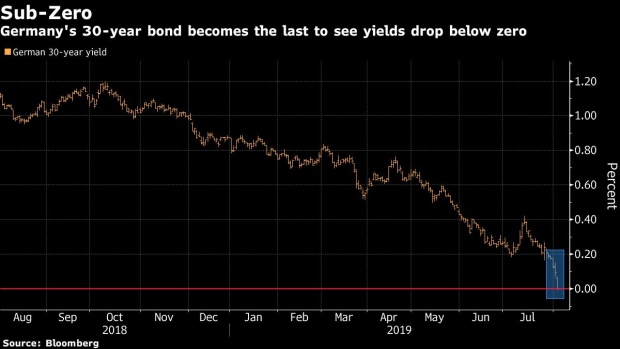 (Bloomberg) — German 30-year bonds rallied to send yields across the whole of its debt market below 0% for the first time after President Donald Trump ratcheted up the U.S. trade war with China.

The euro area’s biggest economy joined Denmark and Switzerland in the region in offering negative returns to investors should the notes be held to maturity, taking the total stock of investment-grade debt yielding less than 0% to $14 trillion globally.

The move will add to fears that the region’s economic slowdown is being driven by more structural factors akin to Japan’s “lost decade.” Germany’s bond market is widely perceived as being one of the world’s safest, with investors lured in by the liquidity and credit quality offered. Funds still looking to extract a positive return from European sovereign assets have been forced further out the yield curve or into riskier debt markets such as Italy.

“It underlines that the hunt for yield, or rather hunt to avoid negative yields, is accelerating day by day,” said Arne Lohmann Rasmussen, head of fixed-income research at Danske Bank A/S. “It just makes things more complicated.”