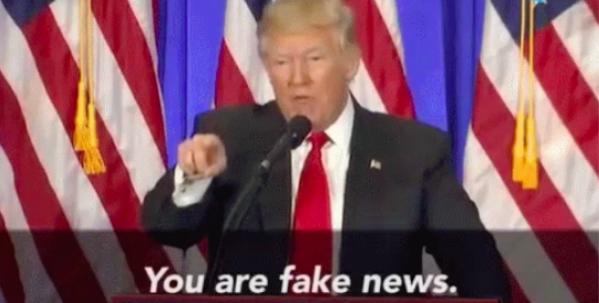 “Those who report the news and shape public narratives are of particular interest to US oligarchs, who bought up the old media long ago and are doing everything in their power to secure influence over the new media as well,” caitlinjohnstone recently wrote on Steemit. “Pundits like Joy Reid are some of their most valuable assets, and they protect those assets accordingly. Because whoever controls the narrative controls the world.”

The media bubble is very real and it’s only getting worse. Our major media companies consist of a cast of anchors and pundits suffering from a severe case of Trump Derangement Syndrome. They got 2016 wrong and they are still getting it wrong, continuing to promote the baseless Russian collusion narrative while ignoring the many successes Trump has made in his first two years in office and failing to adequately cover much more significant stories.

Journalistic groupthink is the primary symptom of Trump Derangement Syndrome. The media still cannot accept that they live in a world in which Donald Trump is president. The bias can no longer be ignored. The blatant Fake News is deluding the nation. And the deception has gone too far.

America is finally waking up as “Fake News” was named word of the year last year, defined by The Collins Dictionary as, “noun (feɪk ˈnjuːz): false, often sensational, information disseminated under the guise of news reporting.”

Just look at where journalists and our mainstream media companies are located. Tucker Doherty dug into the statistics and broke them down against voting patterns and Census data for Politico to decipher exactly what the American media landscape looks like and how it has changed in recent years.

“The national media really does work in a bubble,” the Politico piece reads, which is “something that wasn’t true as recently as 2008.” And this bubble is expanding and concentrating along the coasts. Journalists working in media today aren’t just located in pro-Clinton country, they are in the most pro-Clinton counties in the country. Reporters and television pundits really are clustered in Brooklyn, DC and California. The numbers unveiled by Politico bear this undeniable reality out. It is no exaggeration. “Not only is the bubble real, but it’s more extreme than you might realize,” Politico points out. 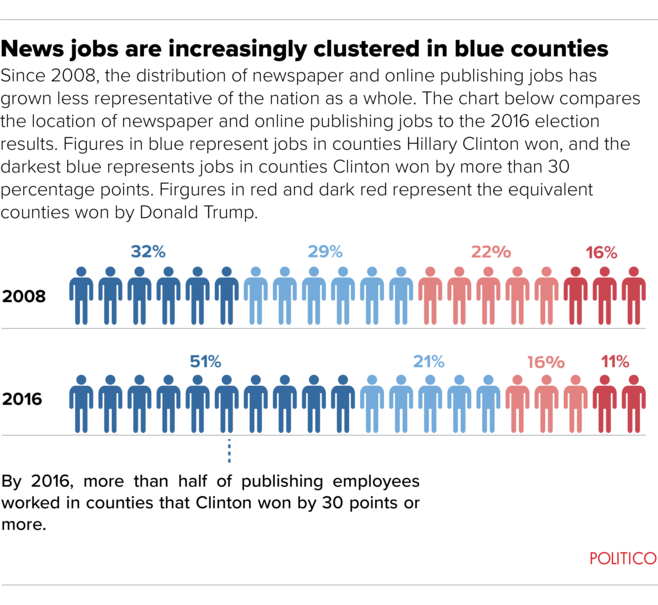 Americans increasingly distrust the media and they are looking for alternatives.

The latest example of the mainstream media’s detachment from everyday middle class, middle America citizens was Michelle Wolf’s recent screed at the White House Correspondents Dinner. This unfortunate episode put on full display how the national news outlets’ relationship with its audience is really, really bad, according to Nick Gillespie of the libertarian website Reason.

It was impossible to not cringe watching these “wealthy, well-connected TV journalists side with powerful politicians against freedom of expression or when Brooklyn-based scribes imagine Americans as children and Donald Trump as ‘a stepfather who was going to rape us,’” Gillespie writes. But the media’s sensationalism knows no bounds these days. It’s all about the ratings. The truth is no longer reported if it does not fit the narrative.

Wolf’s performance, which was berated by politicians from both sides of the aisle, was brutal in her mocking of the president and his team, some of whom were seated very close to her. Hours after the dinner debacle, even Mika Brzezinski and Andrea Mitchell of NBC and NYT’s White House Correspondent Maggie Haberman denounced Wolf’s treatment of White House Press Secretary and her totally uncalled for and glaringly unfunny jokes. In fact, the WHCA’s own head, Margaret Talev, outright regretted having Wolf appear. Talev wrote, “Last night’s program was meant to offer a unifying message about our common commitment to a vigorous and free press while honoring civility, great reporting and scholarship winners, not to divide people. Unfortunately, the entertainer’s monologue was not in the spirit of that mission.” Ya think???

An even more recent example was Samantha Bee calling Ivanka Trump a “feckless c*unt” after the president’s daughter and close adviser posted a picture of her kissing her kid. Bee was further prompted by the erroneous pretext that Trump is ripping children apart from their families and cruelly detaining them following the uproar of a photo posted of children in an ICE jail that was actually from 2014. The Fake News is coming hard and fast these days despite Trump’s spotlight on the issue. But they can no longer get away with their conniving ways during this social media age.

READ  Taiwan is getting HAMMERED by the YOU-KNOW-WHAT!

The high-handed response from these pompous liberal celebrities has reached a point that they are doing anything they can to get the most attention no matter the facts of the matter, wholly consumed by their hatred of Trump and the Republican Party. So far this year, Bee’s Nielsen ratings are down 34 percent among adults ages 18-49 and last week both Autotrader and State Farm dropped its advertising on her show. More recently, Taco Bill, Jim Beam, and Geico dropped their ads from her show as TBS is looking to fill Bee’s timeslot.

Perhaps the most egregious example of the mainstream media bubble, its deranged dtachment from reality, and lack of journalistic standards is the ridiculously overdramatized Russiagate hysteria that has been emanating from the likes of the New York Times, CNN, NBC, the Washington Post, and others since Trump became president and the Democrats needed to blame their epic 2016 loss on anything other than America wanting something different and the disgust of a 3rd-term Obama presidency with Hillary Clinton.

Jack F. Matlock Jr., ambassador to the Soviet Union from 1987 to 1991, reached full outrage when he opened the Times’ lead editorial from earlier this year: “Stop Letting the Russians Get Away With It, Mr. Trump.” Matlock asked if the Times’ editors did even the very bare minimum amount of due diligence before putting this kind of garbage out on the front page of their opinion section.

In a recent piece in The Nation, Matlock outlines the seven actual facts we have learned throughout the unconstitutional Mueller / Deep State investigation on Russia-Trump collusion. The former ambassador does not believe a bunch of Russian trolls were able to upend our election or that Trump conspired with Russian officials in any way. That is an outlandish claim that has garnered zero evidence to support it. The Times is of course not the only offender in propagating these warrantless claims, but its editorial pages seem to be the farthest out there in terms of outrageous opinions masquerading as fact and direct attacks on the presidency with no actual truth to back up what they’re writing.

“Unless there is a mass shooting in progress, it can be hard to find a discussion of anything else on CNN. Increasingly, both in Congress and in our media, it has been accepted as a fact that ‘Russia’ interfered in the 2016 election,” Matlock lamented.

And in recent weeks, we are learning that Obama’s FBI were the ones colluding against Trump to tie him to Russia with a spy embedded in the campaign. But of course this is being dismissed as a big nothingburger even though it is far bigger than Watergate.

Jack Matlock – the last non Neocon US Ambassador to Russia:-
Amid ‘#Russiagate’ Hysteria, What Are the Facts?
We must end this Russophobic insanity.t.co/jn9HIyuZZW pic.twitter.com/RVcJn1BZuy

President Trump won the presidency in 2016 fair and square. There’s no debate about that. The electoral college catapulted him to the White House, notwithstanding his loss in the popular vote. The Russiagate hysteria has to stop. There is nothing there. There never will be. In the coverage of nonexistent Russian collusion and Stormy Daniels tabloid gossip, we are ignoring some very important issues facing our country. This is why you have to tune out of the mainstream media if you want straight up objective news.

With the exponential rise of Fake News and partisan journalist hacks in the era of President Donald Trump, many are indeed tuning out of Fox News, CNN, MSNBC, CBS, ABC, and others and are turning to alternative media! These sites are objective, different, and regularly without the spin and bias that has polluted our newsrooms of our once-heralded press.

You just have to make sure you find the right ones.

Here is a list of the top 3 alternative news sites, as compiled by Adam Rosszay (who listed 11), founder of Citizen’s Cafe, a website “Calling on all subject matter experts, journalists, bloggers, and activists to join us in creating the world’s first essential gateway to information.”

End the Fake News. End the Mueller investigation. End the mainstream media by tuning out and tuning into alternative news. Stay plugged in. Stay skeptical. The truth is out there for those willing to seek it. Although some major media sources maintain some semblance of credibility and respectable reporting, it is imperative to take it all with a grain of salt because these journalists live in a bubble entirely separate from the rest of the country.