Rudy Giuliani leveled serious new claims at the Bidens in a series of Monday morning tweets. Chief among them is a claim that $3 million was laundered to former Vice President Joe Biden’s son, Hunter, via a “Ukraine-Latvia-Cyprus-US” route – a revelation he claims was “kept from you by Swamp Media.”

Trump’s personal attorney then mentioned China – where journalist Peter Schweizer reported Joe and Hunter Biden flew in 2013 on Air Force Two. Two weeks later, Hunter’s firm inked a private equity deal for $1 billion with a subsidiary of the Chinese government’s Bank of China, which expanded to $1.5 billion, according to an article by Schweizer’s in the New York Post.

Giuliani then went on to tweet that the Bidens lied about not discussing Hunter’s overseas business.

On Saturday, Joe Biden said he “never” spoke with Hunter about the Ukrainian energy company that Hunter sat on the board of while being paid $50,000 per month. As you’re doubtless aware by now, the elder Biden threatened to withhold $1 billion in US loan guarantees from Ukraine if they didn’t fire the investigator probing the company, Burisma.

Rudy Giuliani: “[Biden’s] family has been taking money from his public office for years, $1.5 billion from China, when our VP is supposed to be impartially and independently negotiating for us? He takes [his son] on Air Force Two to China and the kid … is a drug addict”

Here’s what we know about Hunter’s dealings in China based on Schweizer’s reporting via our May report:

Hunter Biden and his partners created several LLCs involved in multibillion-dollar private equity deals with Chinese government-owned entities.
The primary operation was Rosemont Seneca Partners – an investment firm founded in 2009 and controlled by Hunter Biden, John Kerry’s stepson Chris Heinz, and Heniz’s longtime associate Devon Archer. The trio began making deals “through a series of overlapping entities” under Rosemont.
In less than a year, Hunter Biden and Archer met with top Chinese officials in China, and partnered with the Thornton Group – a Massachusetts-based consultancy headed by James Bulger – son nephew of famed mob hitman James “Whitey” Bulger (h/t @Guerrilla_Magoo for the correction).
According to the Thornton Group’s Chinese-language website, Chinese executives “extended their warm welcome” to the “Thornton Group, with its US partner Rosemont Seneca chairman Hunter Biden (second son of the now Vice President Joe Biden.”
Officially, the China meets were to “explore the possibility of commercial cooperation and opportunity,” however details of the meeting were not published to the English-language version of the website.
“The timing of this meeting was also notable. It occurred just hours before Hunter Biden’s father, the vice president, met with Chinese President Hu Jintao in Washington as part of the Nuclear Security Summit,” according to Schweizer.
Perhaps most damning in terms of timing and optics, just twelve days after Hunter and Joe Biden flew on Air Force Two to Beijing, Hunter’s company signed a “historic deal with the Bank of China,” described by Schweizer as “the state-owned financial behemoth often used as a tool of the Chinese government.” To accommodate the deal, the Bank of China created a unique type of investment fund called Bohai Harvest RST (BHR). According to BHR, Rosemont Seneca Partners is a founding partner.
It was an unprecedented arrangement: the government of one of America’s fiercest competitors going into business with the son of one of America’s most powerful decisionmakers.

Chris Heinz claims neither he nor Rosemont Seneca Partners, the firm he had part ownership of, had any role in the deal with Bohai Harvest. Nonetheless, Biden, Archer and the Rosemont name became increasingly involved with China. Archer became the vice chairman of Bohai Harvest, helping oversee some of the fund’s investments. -New York Post

Biden admits he witheld a Billion US dollars unless the Poroshenko fired the prosecutor investigating his son, Hunter Biden:

ABC investigation into the scandal:

When Biden quits the campaign as he most surely will that only leaves a bunch of open borders, baby killing, gun confiscating, SOCIALISTS campaigning on how OUTRAGEOUS they can raise your taxes. Bernie wants $16 trillion for the green new deal, close to what the others want. AND GUESS WHAT, that would be new taxes on the PEOPLE.

Leshchenkos is just a bought and paid journalist for the Democratic party, his testimony is contradicted by all the government officials who say Biden and Hillary clinton got not just a few but MANY millions of payments through many Ukrainian banks. The evidence is clear, Hillary and Biden shook down Ukraine big time. The evidence is all at Eustace’s thread:

Hows it end up that Ukraine was the top donor to the Clinton foundation of $10 million? 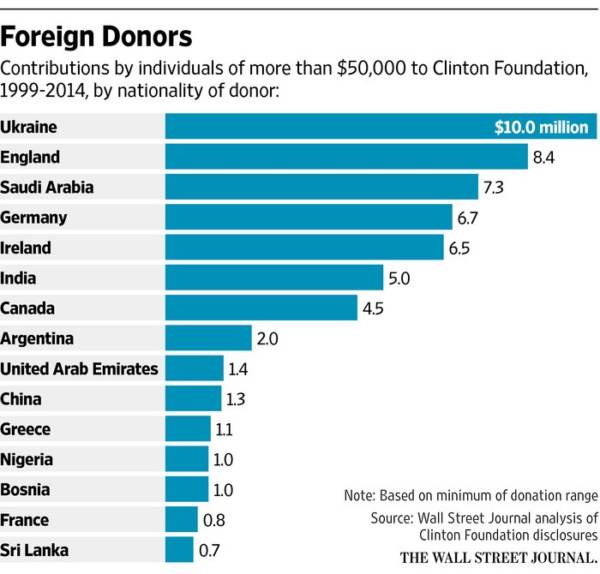 Vasily Prozorov was an Ukrainian security service (SBU) staffer from 1999 to 2018. Since 2014, he was an expert consultant in the SBU’s main anti-terror unit. In 2018, he fled to Russia. The Ukrainians now call him a traitor. Writing on his blog Ukraine Leaks, he says that in 2016, the Ukrainian government openly supported Hillary Clinton and tried to help her defeat Donald Trump.

“Former Ukrainian president Petro Poroshenko was terribly afraid of a Republican victory, believing Donald Trump would change Russia policy and lift sanctions, reducing support for Ukraine and robbing Poroshenko of his Western power base,” Prozorov writes. “Ukrainegate is a criminal conspiracy of representatives of Hillary Clinton’s campaign and the leadership of Ukraine in the person of Poroshenko, aimed at preventing Donald Trump from winning.”

“At that time, I worked at SBU HQ in Kiev,“ says Prozorov. “I remember the panic that gripped the power structures in Ukraine after Donald Trump’s victory. They expected immediate retaliation from Washington for Ukraine’s participation in the attacks on Trump. Many politicians deleted their social media posts criticizing Trump.” However, as it turned out, the phony Russiagate witch hunt kept the Trump campaign from doing anything that could look like “collusion” or “obstruction” abroad. Now, however, the Ukrainegate conspiracy is starting to unravel.

How Ukraine financed Hillary Clinton
Prozorov charges that during the 2016 presidential race, the Ukrainian government not only helped Hillary Clinton by providing potentially damaging information on Trump campaign employees like Paul Manafort, but also used money diverted from the IMF to fund Hillary Clinton’s compaign.
Beginning with the Obama-assisted coup in Kiev in 2014, the National Bank of Ukraine received billions in foreign aid from the International Monetary Fund to keep the Ukrainian financial sector afloat. “A year after Poroshenko’s pro-Western government came to power in 2014, the IMF agreed to loan Kyiv $17.5 billion (€15.8 billion) over four years — and then suspended the aid in 2017 after disbursing only half of it over worries about corruption”, Deutsche Welle reports.
Around the time of the US presidential campaign, Ukrainian banks started funneling this money offshore via the Austrian Meinl Bank – up to $800 million, as Kate Matberg reports on Mediapart. The banks paid kickbacks to the head of the National Bank, Valeria Gontareva, and her patron, Petro Poroshenko, Prozorov claims.

It’s so funny to see the deflection the Democrats and CNN trying to hide Biden and Hillary’s crimes by attacking the president. Sorry, but if you know a crime has been committed it is YOUR DUTY to report it, that’s all the president was doing, trying to get the Ukrainians to investigate A CRIME. So what if Biden is running for president, that doesn’t make him immune from being investigated for a crime.

Of the 36 banks that were granted loans by the National Bank of Ukraine at the expense of the IMF, 11 were closed without returning borrowed funds. The two banks which received the most of IMF money are Dnipro Credit and Delta Bank (folded 2015), which are owned by the oligarch Viktor Pinchuk, who also had close ties with the former IMF head in Ukraine, Jerome Vacher.

Pinchuk is the founder of the Victor Pinchuk Foundation, which has “used offshore companies to funnel over $29 million to the Clinton Foundation since 2012, the largest transfers in 2015 and 2016,” Prozorov says.
Despite being one of the poorest countries in Europe, Ukraine was the leading donor to the Clinton Foundation 1999-2014, the Wall Street Journal reports: “Mr. Pinchuk and his wife—the daughter of former Ukraine President Leonid Kuchma —began donating to Clinton charities in 2006 after being introduced to Mr. Clinton by Doug Schoen, a pollster who has worked for both Clintons.”
“Ukrainian steel magnate Victor Pinchuk gave the (Clinton Foundation) $10 to $25m”, The Independent wrote in 2018. “And he was by many accounts not shy about asking for help from Hillary Clinton when she served as secretary of state.”