When this long-discredited idea reemerged a few years ago, many wrote it off as insane with no chance of happening.

It was just too crazy to be true, much less taken seriously…

It’s as if a politician was promising to give every person in America a free pony… and then the public elected that person.

With disastrous economic ideas rapidly spreading across the US, it was only a matter of time before this ridiculous notion would manifest itself into actual policy.

I’m referring to Modern Monetary Theory (MMT), one of the latest buzzwords coming out of Washington, DC.

In short, MMT promises “free everything,” which the government’s printing presses finance – supposedly without consequence. The government prints money to meet its obligations.

MMT is the same economic quackery that’s brought misery to Argentina, Venezuela, Zimbabwe, and countless other places. Now, US economists, politicians, and policy wonks are taking it seriously, too.

Contrary to its name, MMT is neither new nor “modern.” It’s an old economic poison in a shiny new bottle. And adding the word “theory” to something doesn’t make it scientific or credible.

Instead, let’s be clear and specific with our words and call MMT what it really is – the Classic Counterfeiting Swindle.

In the last couple of months, MMT – something most people regarded as a crackpot fantasy – has become a reality.

But it’s not just socialists who are advocating for it…

President Trump – the self-described “King of Debt” – and the Republicans have whole-hardheartedly endorsed this destructive policy.

Following the coronavirus hysteria, the entire US political system has thrown out the last semblance of fiscal and monetary sanity.

For no better proof, look at this year’s staggering, record-shattering federal budget deficit. 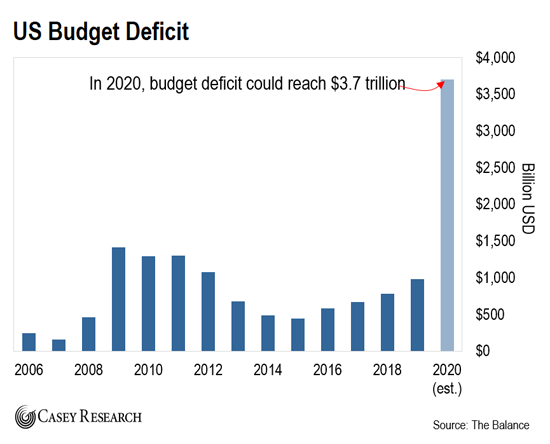 The federal government expects to spend at least $3.7 trillion more than it brings in for 2020.

That’s likely to end up being too conservative. The actual deficit will probably far exceed $4 trillion.

The US Has Lost Its Collective Mind

The government is financing this astounding amount of money by issuing more and more debt.

So who is buying all of this paper? The Federal Reserve is. By using “money” it creates out of thin air. (If this sounds like it’s a scam, that’s because it is.)

For this reason, the Fed’s balance sheet has exploded in recent months. Note the far right part of the chart below. 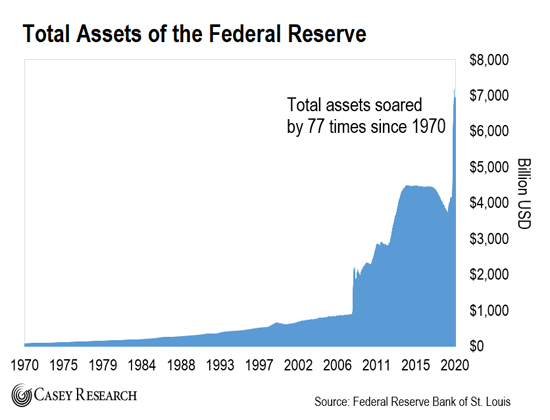 In a more honest system, the government wouldn’t be able to finance itself through fraud. It would have to raise taxes or tap into society’s pool of savings by issuing debt at the market rate.

But the government could never get away with honestly financing $4 trillion in deficits.

The Fed – which is to say, legalized counterfeiting – has become an indispensable tool for the US government to finance its budget. That means the US has already adopted MMT, and there’s no turning back.

It’s another frightening indication the US has lost its collective mind.

The depth and magnitude of the economic drop-off took Modern Monetary Theory – or the direct monetization of massive fiscal spending – from the theoretical to practice without any debate. It has happened globally with such speed that even a market veteran, like myself, was left speechless.

The fact that fiscal and monetary policy are now irrecoverably intertwined has revealed one of the biggest misconceptions about central banks.

Contrary to what the bobbleheads on CNBC, and the rest of the mainstream media and academia tell you, central banks are not “independent” and never have been. They solely exist to give the government an easy option to finance itself by taxing the population (through inflation) in a way that perhaps not one in 100 will understand.

That brings up an important point…

Almost everyone takes central banks and “monetary policy” for granted as a permanent fixture of the universe. But the truth is, they’re not only completely unnecessary, but destructive. They shouldn’t exist in a free society.

We don’t need a politburo to centrally plan the money supply and interest rates – which are the most important prices in all of capitalism. It only works to enrich politically connected insiders while impoverishing everyone else.

As central banks discredit themselves beyond repair by embracing MMT, it’s going to usher in a new monetary era. Alternative monetary goods will take center stage – first and foremost, gold.

Gold Is Returning to Its Rightful Place

For over 5,000 years, gold has been mankind’s most enduring form of wealth.

Throughout history, many different civilizations around the world have reached the same conclusion: gold is money.

That didn’t happen by accident.

It happened because gold has a set of characteristics that make it uniquely suitable as money.

Gold is durable, divisible, consistent, convenient, scarce, and, most importantly, a hard asset, which means its annual supply growth is insignificant relative to its existing supply. Its worth doesn’t depend on any government, or any counterparty at all.

And for the first time in over 50 years, gold is returning to its rightful place at the center of the international monetary system. That’s what makes this current gold bull market fundamentally different.

This gold bull is not going to be like previous ones. It will be riding the wave of an incredibly powerful trend: the re-monetization of gold.

I’m not talking about a garden-variety cyclical gold bull market, but the BIGGEST gold mania in history. And it’s already well underway. 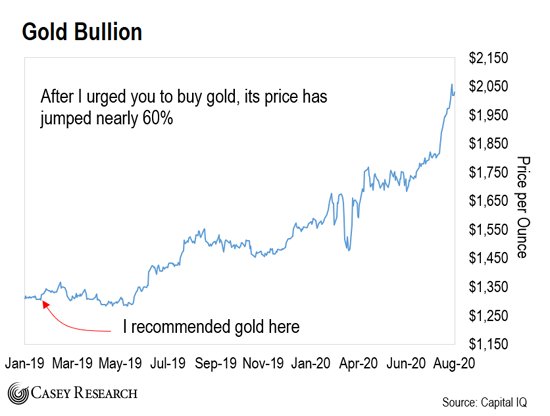 I think there’s an excellent chance that gold could exceed $10,000 as this all plays out.

That’s about a 5x return from here just on the price of gold. I think that could prove to be too conservative. It’s in line with how previous bull markets turned out – as we can see in the chart below – and the current bull market we’re in is likely to be much bigger. 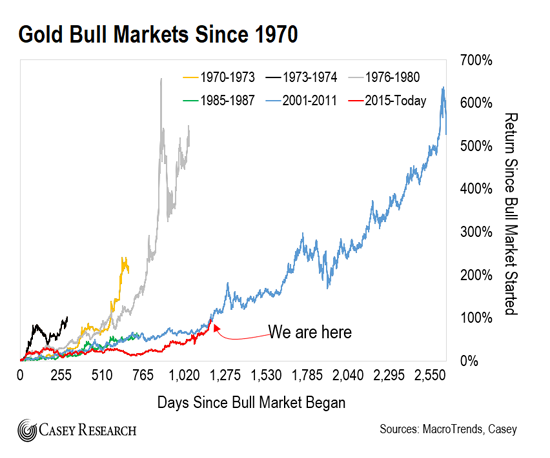 Remember, this is just the price of gold.

Junior gold stocks could soar much higher. Regular readers know gold stocks often amplify the price of gold. So it’s not unusual in bull markets for junior mining stocks as a group to go 10-to-1, with 100-to-1 shots possible, with the right companies.

We’re not at the bottom anymore, but gold stocks are still far off from their highs, as we can see in the chart below. 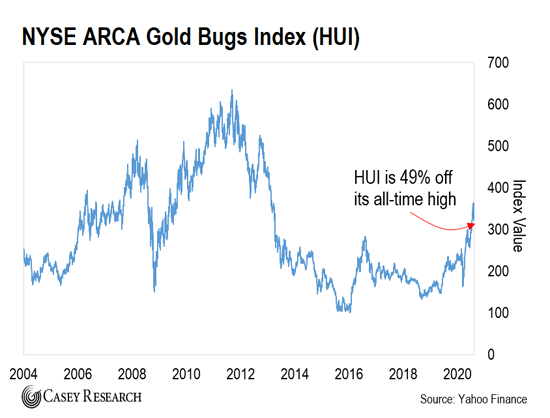 With the insane valuations of the broader market, gold stocks today are still a relative bargain.

That’s why I’m urging readers to position themselves now. Owning some physical gold – and keeping it in your own possession – is step one. It’s something everyone should do.

In addition to physical gold, you’ll also want leveraged upside to grow your wealth. For that, we’re looking at companies that are in the business of exploring for, developing, and producing precious metals.

The chances are high that select gold stocks will reward patient speculators with 5-baggers, 10-baggers, or higher returns – if you choose the best companies.