This Valentine’s Day might best be remembered for two things in particular. One, for the first time in 153 years, candy lovers won’t be able to pick up a box of Sweethearts, those classic heart-shaped candies bearing sweet nothings like “BE MINE” and “CRAZY 4 U.” And two, consumers are set to spend more than $20 billion on Valentine’s gifts for the first time ever, thanks in part to a surge in gold jewelry demand—specifically, yellow gold.

Regarding Sweethearts, they’ll be missing from store shelves this year because the candy’s manufacturer, Necco, sadly went bankrupt last May. But never fear! Its new owner, Spangler Candy Company—maker of Dum Dums lollipops—could bring them back as soon as next year.

As for Valentine’s Day spending, what I find interesting is that it continues to grow even as the number of people who admit to celebrating the holiday has been on the decline for years now, according to the National Retail Federation (NRF). It’s estimated that Americans will shell out an all-time high of $20.7 billion this year, easily topping the previous record of $19.7 billion set in 2016.

The increase in spending, I believe, can largely be attributed to the Love Trade, which is all about gold’s timeless role as a treasured gift. Of the $20.7 billion, an estimated 18 percent, or $3.9 billion, will be spent on jewelry alone, much of it featuring gold, silver and other precious metals and minerals. 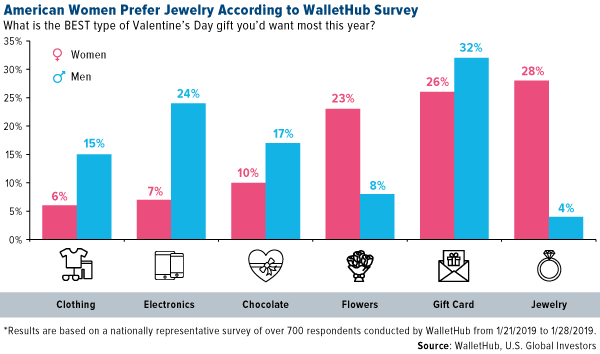 Yellow Gold Gets a Royal Endorsement

But what kind of jewelry should you get your spouse or partner? You may have seen stories about how  yellow gold jewelry—as opposed to white and rose gold, not to mention silver and platinum—began to fall out of favor in the 1990s, the attitude being that it was “tacky” or “old fashioned.” Personally, I don’t believe it’s ever fallen out of fashion, but we have been seeing its popularity gain additional ground lately. Look no further than Men?, the revolutionary 24-karat jewelry company that’s disrupting the industry.

Much of the renewed interest in yellow gold jewelry is thanks to Prince Harry, who presented Meghan Markle with a gold engagement ring in late 2017. Speaking to the BBC, the prince said that choosing yellow gold was a no-brainer.

“The ring is obviously yellow gold because that’s [Meghan’s] favorite,” he said, adding that the inset diamonds are from his mother Princess Diana’s jewelry collection, “to make sure she’s with us on this crazy journey together.”

Industry experts are taking notice. Well-known designer Stephanie Gottlieb told “Brides” magazine in December that she was seeing  more and more requests for the yellow metal. “Our brides are turning to the same metal that graces their mothers’ engagement rings, but elevating it to take yellow gold from the 80s squarely into 2019,” Gottlieb said.

It should come as no surprise, then, that Google searches for “gold jewelry” surged to an 11-year high this past December. What’s more, gold jewelry demand in the U.S. rose to a nine-year high in 2018, according to the World Gold Council (WGC). Americans bought as much as 128.4 tonnes during the year, up 4 percent from 2017, while fourth-quarter demand of 48.1 tonnes was the highest since 2009.

A Gift That Doubles as an Investment

Ideally you’re buying jewelry for a loved one this Valentine’s because it looks great on and makes them happy. But when I buy gold jewelry in particular, it helps to know that the piece doubles as an investment. Unlike some other costly gifts, gold jewelry will hold its value for many years to come. In a recent presentation, Men? points out that a 50-gram gold bracelet purchased 20 years ago for $500 would have outperformed both the S&P 500 Index and the U.S. dollar. That same bracelet, Men? says, would today be worth around $2,000.