– Gold signs off Q1 2018 with best run since 2011
– Gold price supported by safe haven demand, interest-rate concerns and inflation
– Trade wars and concerns over equity market have sent investors towards gold
– ETF holdings highest in nearly a decade
– Goldman Sachs: ‘The dislocation between the gold prices and U.S. rates is here to stay’ 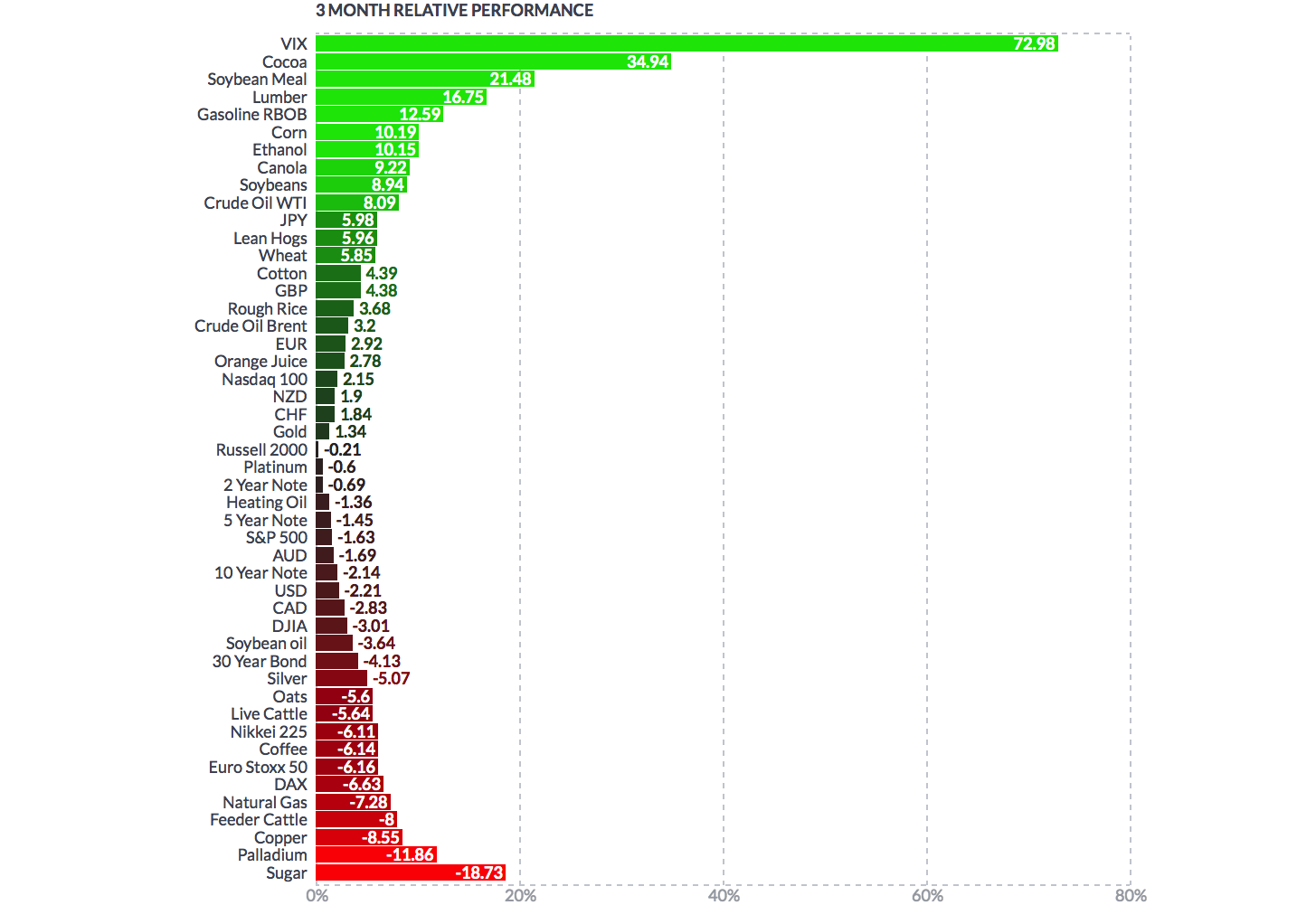 Gold’s finish for the quarter was its lowest quarterly rise seven years but price-supporting factors present a bullish environment going forward. In the final week of the quarter gold traders were the most bullish they’ve been since January 26, according to the weekly Bloomberg survey, whilst Goldman Sachs turned bullish on gold for this first time in five years, suggesting they too see gold’s upside potential ahead.

ETF holdings reached 2,268.6 metric tons in March’s penultimate week, the highest since 2013. Holdings have increased in eight of the nine previous quarters, climbing by 43 tons in the first quarter this year.

The safe haven qualities of gold have brought it firmly back into the spotlight this year. Trump’s sabre-rattling and trade wars have done little to quell concerns that the global geopolitical and economic situation will return to a steady keel. Recent appointments to the White House – namely John Bolton and Mike Pompeo – have furthered exacerbated worries regarding the US President’s ‘America First’ strategy.

The administration is also favourable of a weak dollar, which suggests that little is likely to change when it comes to the currency’s recent performance. Whilst it has ticked up recently it has not been able to break it’s longer-term downtrend. Bloomberg Intelligence’s Mike McGlone said in a recent note that the gold price may soar to $1,400 per ounce should the downtrend not reverse and the US dollar remain weak.

The currency is also falling out of fashion. There is an ongoing shift out of the global reserve currency, not to mention the global equities fall for the first quarter in two years. 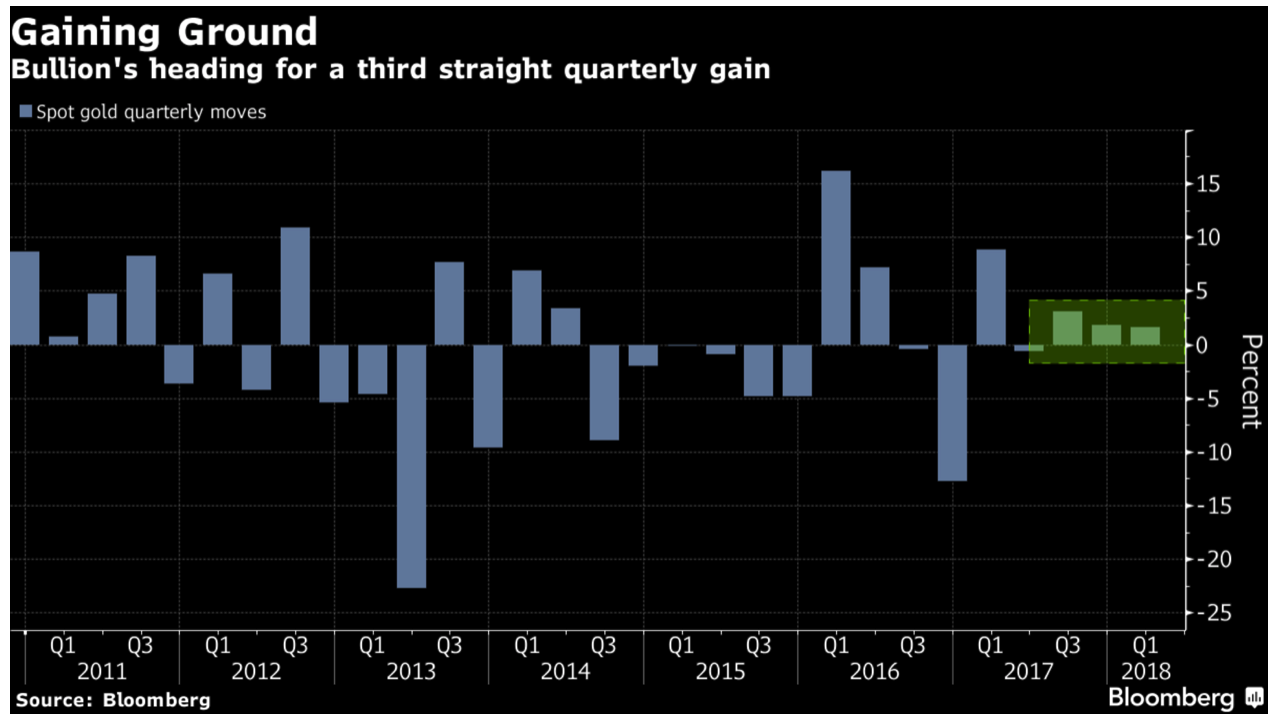 Five years ago the gold price plunged as market commentators and funds became spooked over rumours of QE tapering. The Federal Reserve’s hikes have proven that easy monetary policy went so far that gold is an increasingly attractive option as both a safe haven and store of value.

Goldman Sachs analysts last week indicated that interest rates were one area of concern and would support gold prices, “Based on empirical data for the past six tightening cycles, gold has outperformed post rate hikes four times…Our commodities team believes that the dislocation between the gold prices and U.S. rates is here to stay.”

In times past one would understandably expect the gold price to react negatively to an uptick in interest rates, because the opportunity cost of holding it rather than bonds or cash increases.

But, six rises from the FOMC since 2015 have done little to break gold’s run. This is thanks to inflation which has impacted the cost of living so much that real interest rates have actually decreased between 2015 and the end of 2017. So, this could explain why the gold price has climbed.

More interestingly, however is that since the end of 2017 real interest rates in the open market have been rising and so too has the price of gold. In both Q4 2017 and now Q1 2018 the gold price has climbed, as have inflation-adjusted 5-year bond yields.  This is something that has not been seen since the gold price hit it’s all time high of nearly $2,000/oz. Perhaps another sign that the great global economic recovery we all keep hearing about is not quite as present as politicians would like us to believe.

Markets are also struggling to reconcile the disparities between the Fed’s and other central banks’ monetary policies. The FOMC is clearly in the latter stages of its rate-hike plans, yet other monetary policy committees are yet to make significant changes. This shows that the global financial system is not yet back on equal footing and we are likely to see more diversions across economies and markets.

…well it never went away, but it is back in terms of how it is spooking money managers once again. As we explained a couple of weeks back ‘the LIBOR-OIS spread has been climbing sharply and is now higher than levels seen during the height of the eurozone sovereign debt crisis of late 2011 and early 2012’.

Recently the pace of increases in LIBOR has accelerated, faster than FOMC rate hikes. This may be pointing to serious signs of stress in the U.S. money markets as this is something not seen since the financial crisis.

Trade wars are still a threat

For many gold’s safe haven qualities may have been reduced somewhat once the Trump administration made some concessions for various countries, following the announcement of steel and aluminium tariffs. Concessions were granted to those who account for around 85% of imports.

However, Trump has left some countries waiting for their sentence which creates uncertainty in the market. It also suggests the administration is still working through various trade policies that it plans to implement this year. The EU is a major trading partner that has been told that it will have to wait to find out the charges on its own exports to the US. Officials from the monetary union have already indicated that there will be an equal and fair response to any measures taken by America when it comes to trade.

See also  Chinese tech stocks seeing declines across the board

Hurdles on the horizon?

The above is a very small snapshot of factors that are providing support to the price of gold. We have made little mention of the impact of Brexit, the stock market, peak gold and of course inflation which is now beginning to truly reveal itself. All of these will likely play varying roles when investors are deciding on portfolio allocations and safe haven assets.

The point is, wherever you turn there is a clear signal pointing upwards for the price of gold. At present it seems there are two things that could halt gold in its immediate uptick – a recovery for inflation and a fall in stock market volatility. The former is highly unlikely and the latter may happen in the short-term but ultimately will cause significant damage.

Once again the price of gold is indicating that there are major structural issues in the global financial and political system. They are all interlinked will little chance of one suffering without the other feeling the impact. Investors should take advantage of the gold price now. The factors are aligning for a situation akin to the the financial crisis, which could be dangerous for those holding cash in the bank or other assets exposed to counterparty risk.

As Dominic Frisby concluded in his latest piece on gold, ‘[there are those]who have owned gold since the 00s, riding out both the bull and the bear market. I can’t help thinking the next five years are going to be better than the last five.’

Gold Is Heading to $1,400 If Trade War Breaks Out, According to Sprott (Bloomberg.com)

When will the penny drop? We don’t need pennies any more (TheGuardian.com)

M&A boom is another sign of a top (MoneyWeek.com)

The Ancient History of Bitcoin (Bloomberg.com)

What If All the Cheap Stuff Goes Away? (CharlesHughSmith)