The price of gold (XAU/USD) bounced on Thursday to recoup more than 60% of yesterday’s losses that came following the latest funds rate cut. The Federal Reserve on Wednesday cut the Funds rate by a quarter-point to bring the base interest rate down to 2.00% from the previous cap of 2.25%.

This cut was widely expected, which is why gold prices reacted modestly rather than the usual upbeat reaction. In fact, some analysts were expecting the Federal Reserve to signal further rate cuts down the line this calendar year, but there was no indication that more cuts will follow.

Technically, the price of gold continues to trade in a consolidative wedge that appears to be forming a triangle and this could eventually lead to a major breakout. The price of the yellow metal has topped $1,555 this year already, a new multi-year high, and is currently trading just below the $1,500 level after today’s corrective recovery. 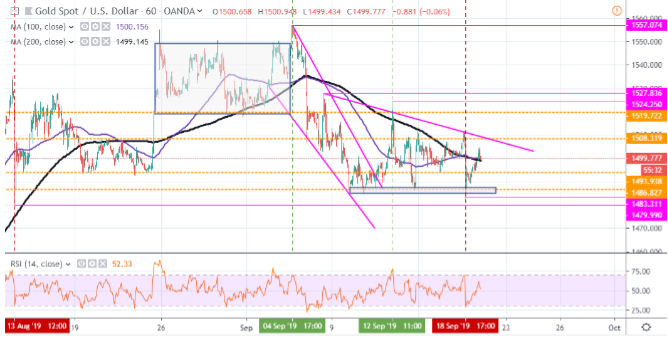 The gold price is pinned between both the 100-hour and the 200-hour moving average lines and this suggests that the current consolidative pattern formation could continue through next week. The relative Strength Index Indicator is also at the center of the normal trading zone, which further supports a continuation of the current trend.

Today’s recovery is merely a corrective measure after investors interpreted yesterday’s Fed decision as ineffective. Since the decision to cut the funds rate by 25 basis points was already anticipated, the expected impact on the price of gold and by extension the US financial markets had already been priced in.

From a fundamental perspective, gold prices rely on a lot more than just the Funds rate. Generally, the health of the US economy plays a key part and cutting interest rates could signal a potential weakness in economic growth.

Some key economic data published recently have also created mixed signals to follow in the disappointment of non-farm payrolls earlier this month which missed expectations of 158k jobs with 130k jobs.

The US bond yields fell further on Thursday, following yesterday’s rate cut and this could also explain the reactionary recovery in the price of gold. However, some positivity could return to the US financial markets after today’s economic data for jobless claims beat expectations.

Meanwhile, trade tensions between the US and China appear to have eased in recent weeks after a show of goodwill from both countries. This could hinder the upside potential in the price of gold in the coming weeks as on-risk trading takes center-stage. However, with October, when the US plans to impose the additional tariffs on Chinese goods approaching quickly, things could change abruptly during the final quarter of 2019.

In summary, yesterday’s Fed Funds rate cut appears to have minimal impact on the price of gold after today’s corrective recovery. However, with more economic data coming in the next few weeks and the date for the US to add tariffs to Chinese goods approaching fast, the next few weeks will be interesting for gold traders. The price of gold could literally hit new multi-year highs before the end of the year.