The digital currency Bitcoin offers an excellent opportunity to investors to diversify their portfolio. The currency continues to spread its wings as it offers higher returns within a short span of time. To assess its investment viability, it’s a good idea to compare it with a proven investment option “Gold”.

“The most obvious difference between Gold and bitcoin is this: Gold is physical and bitcoin is digital. Yet the distinctions between the two run much deeper. Gold is a Precious Metal used by mankind as a medium of exchange for millennia. It is also useful in technology and manufacturing, and is appreciated for its beauty in the form of jewelry, art and keepsakes. Gold is widely regarded as a sound long-term investment and a hedge against market volatility. Bitcoin, on the other hand, is a coded, crowd sourced currency that did not exist until 2009. Bitcoin is the world’s first decentralized digital currency. This novel system for virtual money was first proposed by software developer Satoshi Nakamoto in 2008 and made available to the public in 2009. This system allows members of the bitcoin community to mine new bitcoins using open-source software to solve complex mathematical equations. The total supply of bitcoins that can ever be mined is capped at 21 billion. A bitcoin is represented by the record of its transactions between different addresses. Addresses consist of randomly generated sequences of letters and numbers. Users purchase bitcoin by using another sequence in the form of a private key that is kept secret. Miners must verify all bitcoin transactions.” apmex

Here is a quick comparison of Gold and Bitcoin.

Ease of Tracking: Gold is Easy to Track / Bitcoin is More Difficult

Gold is easy to track because it has a global tracking system. This helps to preserve the value of the investment option because it makes it harder to fake, steal or misroute. Sadly, the same cannot be said about Bitcoins.

Gold is Rare, but Bitcoins are Rarer

One key factor where Bitcoin truly shines is its rarity. While gold is rare, Bitcoin is much rare because there is a limited amount of it that can come into existence. The software stops producing beyond that limit.

Gold has so many exchanges that Bitcoin cannot even compete with. Gold’s global network of exchanges is fairly transparent because the pricing signals are clear. On the other hand, Bitcoin isn’t so clear. There are only a few exchanges that are different from each other. If enough of these exchanges experience issues down the road, this can cause a crisis in confidence that may affect Bitcoin value.

Gold has a Solid Baseline Value / Bitcoin is Purely Speculative

There is baseline value for Gold due to industrial demand for jewelry. Its price cannot crash below a certain line otherwise it would hit this base demand. Pair that with the fact that gold has historically been viewed as a store of value because it can be tapped during uncertain economic times. However, the same cannot be said about Bitcoin because it is purely speculative as there is no industrial use for it is only a digital creation. It only exists in the internet and hard drive storage and servers.

Gold is Easier to Convert into Cash 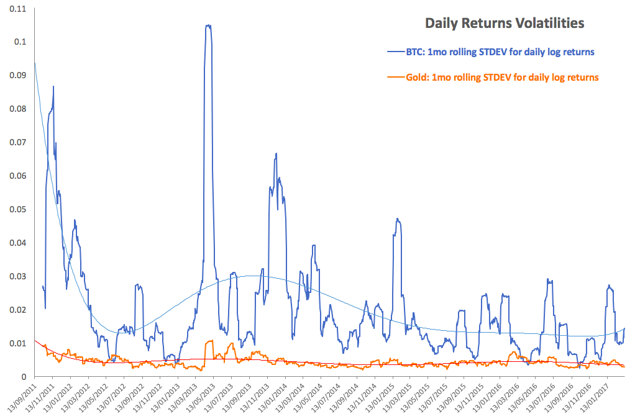 As far as returns are concerned, bitcoin returns and gold returns are not correlated, or in other words, they neither co-move with each other nor countermove against each other. Here’s a chart to prove this: 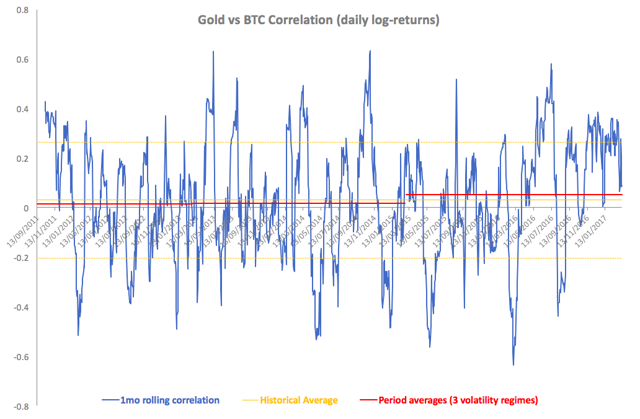 Source: seekingalpha
Bottom line is that one should not engage in wishful thinking. Focus on the facts and risks. This is the proper way to do a Bitcoin vs. gold analysis.

882 views
READ  RETURN OF THE DEEP STATE, WHICH NEVER REALLY WENT AWAY:
READ  "Which cable networks can one go on where one doesn't end up talking to architects of GITMO and the War on Terror? ...the security state went from clandestinely controlling news outlets to doing it on their payroll."

5 thoughts on “Gold Versus Bitcoin – Volatilities And Correlation; Which Will Do Better In 2017”