Get ready, gold bulls: The precious metal could be close to finding a bottom.

The price of gold fell back below $1,200 an ounce again last week as the U.S. dollar advanced following another federal funds rate hike. The precious metal logged its sixth straight month of declines, its longest losing streak since 1989.

That gold’s not trading below $1,150 is, I believe, remarkable. There’s a lot motivating the bears right now. Besides a stronger dollar and higher interest rate, stocks are still going strong, buoyed by record buybacks and massive inflows into passive investment products. In the week ended September 20, investors poured as much as $34.3 billion into ETFs, taking year-to-date inflows to nearly $215 billion, according to FactSet data.

This makes gold mining stocks look especially attractive by comparison. Relative to U.S. blue chips, the FTSE Gold Mines Index is now at its most discounted level in over 20 years. 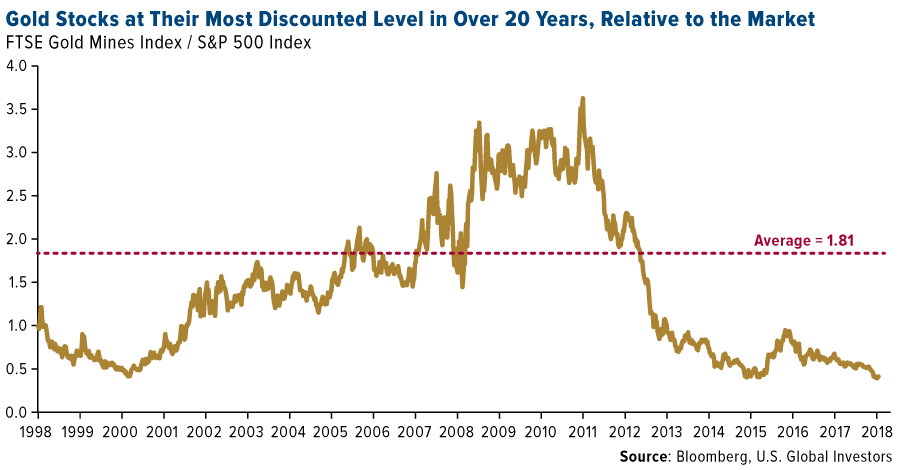 There are other signs that a bottom is near.

For one, Vanguard just restructured its precious metals mutual fund, slashing its exposure to the industry from 80% to only 25%. This means the world’s largest fund company will no longer offer its investors a way to participate in a potential rally in metals and mining stocks.

The last time Vanguard made a change like this, it coincided with a huge run-up in metal prices. In 2001, gold was just as unloved as it is now, prompting Vanguard to drop the word “Gold” from what was then the Gold and Precious Metals Fund.

Last week, mining giants Barrick Gold and Randgold Resources announced an $18 billion merger that, once complete, will create the world’s largest gold producer. An “industry champion for long-term value creation,” according to BMO Capital Markets, the resultant company will “operate five of the 10 ‘tier one’ gold mines on a total cash cost basis and possess numerous projects with potential to” deliver sustainable profitability.