China has expanded its domestic debt to fund its growth, much of which qualifies as malinvestment, creating financial vulnerabilities its government is anxious to mask.

As I noted in Trade Deal Follies: The U.S. Has Embraced the World’s Worst Negotiating Tactics (April 8, 2019), the trade deal was a Nothing-Burger for the U.S. Without any consequences for violating trade deals, China violates all trade deals, starting with the WTO. (As an example, China has never reported its state subsidies to Huawei to the WTO as required by that treaty.)

The only trade deal that wouldn’t be a Nothing-Burger for the U.S. is one that explicitly gives the U.S. the sole power to decide if the deal has been violated and impose the consequences. Agreements without monitoring, enforcement and severe consequences are meaningless.

As a general rule, developing nations want capital to build out industry and markets for their goods (manufacturing) and commodities. Developed worlds are typically post-industrial for a variety of reasons, and what they want is open markets for their services (finance, insurance, entertainment, etc.).

Developing nations have tremendous incentives to limit the goods and services from developed nations, as these would provide too much competition for the domestic sectors they need to build for their export model of development and for domestic employment.

China is two economies: one developed and wealthy along the coast, the other rural and impoverished. China’s domestic strategy is to shift capital from the coast to the impoverished interior to raise the standard of living of its 600 million rural residents.

By any historical measure, the wealthy coast is a developed nation, and so naturally the developed nations want to level the playing field: they want China to open its domestic markets to foreign capital without demanding technology transfers, open domestic markets to foreign services and stop China’s officially sanctioned wholesale industrial espionage and theft of IP.

But the western interior of China is still a developing nation, and so by averaging the per capita GDP and income of its two halves, China can claim to be a developing world in terms of trade deal breaks while claiming superpower status for its developed half.

China can’t have it both ways: if China can afford an army, navy, space program and power projection of a superpower, as well as a global currency, it can’t claim any implicit “right” to trade deals with no enforcement or consequences, nor can it expect to get a free pass to brazenly flout every deal it signs.

China’s leadership has gotten spoiled; it expects the world to cave in to its demands to developing-world trade breaks while it lays claim to superpower status.

China is rapidly expanding its military power and technologies, but it doesn’t have deep, global capital markets or a currency that can become a reserve currency, for the reason I’ve explained here many times: to have a reserve currency, the issuing nation must run a permanent and substantial trade deficit to supply the world with enough of its currency to be useful.

Additionally, the issuing nation must “give away” some of its currency via grants and subsidies to supply nations which would otherwise have limited access to the currency. It must also have deep, liquid capital markets so foreign nations and entities can borrow the currency in size.

Understanding the “Exorbitant Privilege” of the U.S. Dollar (November 19, 2012)

China has been accused of “debt diplomacy” because it forces all its Belt and Road partners to take loans. By forcing loans, China isn’t emitting any of its currency; it’s actually extracting interest payable in other currencies–the exact opposite of establishing a reserve currency.

This reality is reflected in the near-zero role China’s currency (RMB, a.k.a. yuan) plays in the global economy:

All of which is to say that China needs the world’s markets and capital–especially U.S. dollars to service its vast USD-denominated debt. China isn’t self-sufficient and so it doesn’t have the leverage to demand much of its trading partners. Rather, China has expanded its domestic debt to fund its growth, much of which qualifies as malinvestment, creating financial vulnerabilities its government is anxious to mask. 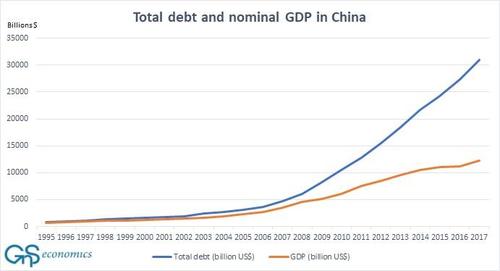 As for the much-touted leverage of China’s ownership of U.S. Treasuries, that’s also a Nothing-Burger. China’s stash of Treasuries has been around $1 trillion for many years. The Federal Reserve created $4 trillion out of thin air, and issued loans and guarantees of around $29 trillion in the Global Financial Meltdown. The Federal Reserve could buy China’s entire stash with newly created currency and the market wouldn’t even notice.

The Treasury market is so large and liquid, the Fed and its private-sector proxies could soak up China’s $1 trillion without batting an eye.

Trade deals have to work for both parties. China has to accept that becoming a developed nation means the implicit free passes granted to developing nations are no longer available. It has to start following the agreements it signs, or it loses access to capital and goods markets it needs.