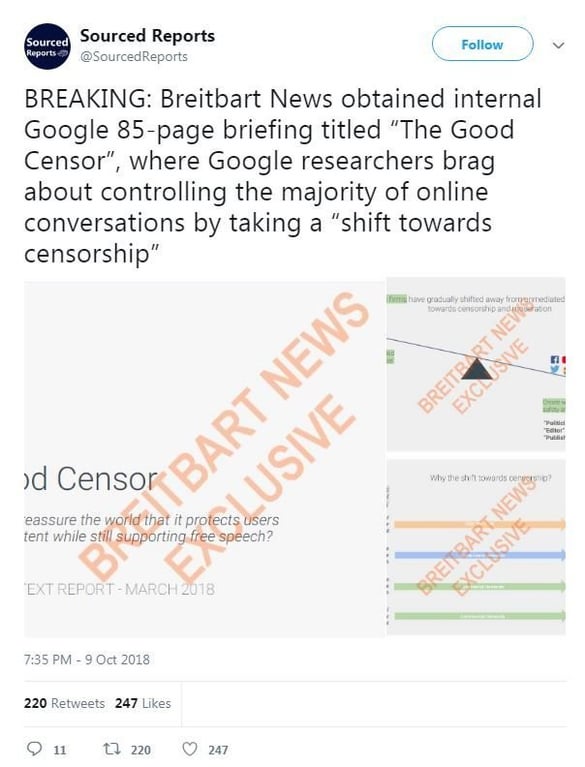 An internal company briefing produced by Google argues that due to a variety of factors, including the election of President Trump, the “American tradition” of free speech on the internet is no longer viable.

Despite leaked video footage showing top executives declaring their intention to ensure that the rise of Trump and the populist movement is just a “blip” in history, Google has repeatedly denied that the political bias of its employees filter into its products.

But the 85-page briefing, titled “The Good Censor,” admits that Google and other tech platforms now “control the majority of online conversations” and have undertaken a “shift towards censorship” in response to unwelcome political events around the world.

Responding to the leak, an official Google source said the document should be considered internal research, and not an official company position.

The briefing labels the ideal of unfettered free speech on the internet a “utopian narrative” that has been “undermined” by recent global events as well as “bad behavior” on the part of users.

It acknowledges that major tech platforms, including Google, Facebook and Twitter initially promised free speech to consumers. “This free speech ideal was instilled in the DNA of the Silicon Valley startups that now control the majority of our online conversations,” says the document.

The briefing argues that Google, Facebook, YouTube and Twitter are caught between two incompatible positions, the “unmediated marketplace of ideas” vs. “well-ordered spaces for safety and civility.”

The briefing associates Google’s new role as the guarantor of “civility” with the categories of “editor” and “publisher.” This is significant, given that Google, YouTube, and other tech giants publicly claim they are not publishers but rather neutral platforms — a categorization that grants them special legal immunities under Section 230 of the Communications Decency Act. Elsewhere in the document, Google admits that Section 230 was designed to ensure they can remain neutral platforms for free expression.

What is also clear is that many of the briefing’s recommendations are now reflected in the policy of Google and its sibling companies.

The document also bemoans that the internet allows “have a go commenters” (in other words, ordinary people) to compete on a level playing field with “authoritative sources” like the New York Times. Google-owned YouTube now promotes so-called “authoritative sources” in its algorithm. The company did not specifically name which sources it would promote.

Key points in the briefing can be found at the following page numbers:

READ  HEY, THEY ONLY CENSOR PEOPLE THEY DISAGREE WITH:
2,200 views