Some people have asked about the computer projections for a tremendous increase in civil violence. There is absolutely no resolution to the great divide that has unfolded politically. The Democrats advocate violence as Hillary clearly states. She says that civility can ONLYreturn when the Democrats take back the government. Clearly, this is throwing down the gauntlet that it shall be their way or no way. This is the end of Democracy for what she is saying is there is to be none.

Back at the beginning of the current Private Wave on the Economic Confidence Model in 1985, I warned that we would face a Crisis in Democracy. It would begin as the government loses power over the economy and the people, it first becomes more abusive. We have been gradually witnessing this trend with the hunt for taxes.

The next stage is the violence. This is what will carry us into the peak of 2032. By that time, the hatred we are witnessing today drawn on political lines is simply that what will happen is all civility vanishes and this will build into violence and end in civil war. Unfortunately, this is not my OPINION. It is simply a correlation of trends that repeat throughout history.

Hillary is effectively advocating the destruction of the United States. She has simply stated bluntly that democracy will no longer be tolerated unless the Democrats win and then subjugate the opposition. She just can not see what she is doing.

So welcome to the new reality of where this madness is going. The embattled Supreme Court nominee secured 50 votes in the Senate and was sworn in as Justice Brett Kavanaugh. The Democrats knew that they would lose so they turned the appointment into a dramatic confrontation that was so outrageous at this point NOBODY in their right mind would ever again throw their hat into the ring. This was all staged and it is intended to be taken all the way into 2020. My live sources say the strategy will make Kavanaugh as a poster child and they will label him as a rapist from here on out.

We have crossed the line. There is no going back. We will now face the Decline & Fall of the United States and this is part of the shift of the Financial Capital of the world to China after 2032. When I lived in New Jersey, at the home next door, a bitter divorce took place. The wife refused to agree with anything and even refused to sign their taxes. The house had been on the market and was under contract for $2.6 million. She refuse4d to sign just to spite her husband. The IRS seized the house, put it up for auction, and sold it for $750,000. Her bitterness wiped out her own future. This is what is taking place on a national level.

“The far-left mob is not letting up,” he said on the floor of the Senate. “Earlier today former Secretary of State Clinton sent this signal as clear as today. This is Secretary Clinton. She told CNN exactly how she views millions of Americans who hold different political views from her own.”

“Here’s what she said: ‘You cannot be civil with a political party that wants to destroy what you stand for. If we’re fortunate enough to win back the House and/or the Senate, that’s when civility can start again,’” McConnell said, quoting a portion of Clinton’s remarks. 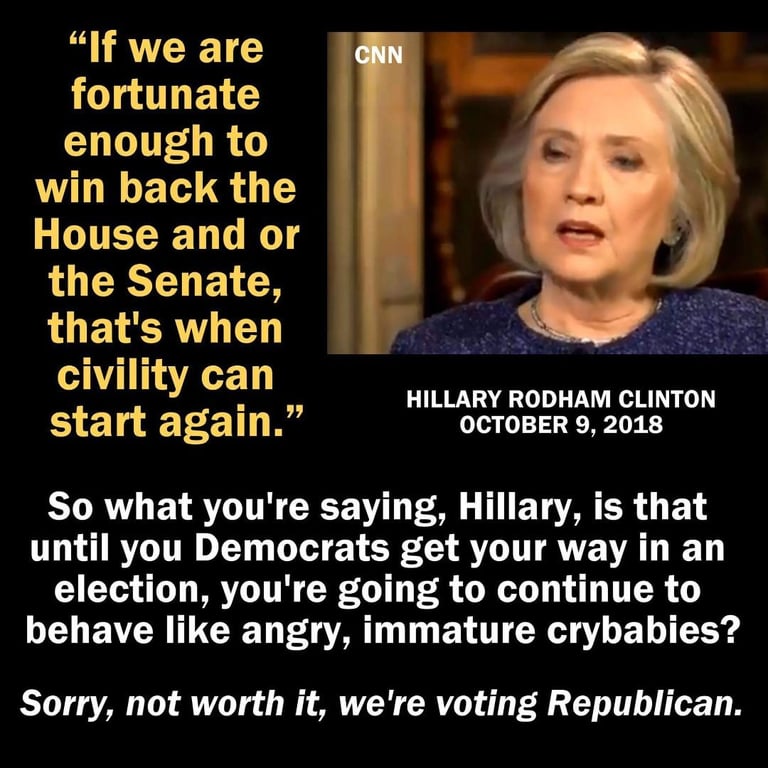