Turkey is threatening to send a drilling ship to waters claimed – and defended – by Greece.

Although the Hellenic Navy neither confirms nor denies it, two experts tell Al Jazeera that Greece has dispatched naval forces to the disputed area southeast of Crete.

“If a Turkish drillship does show up, our ships would take action against it, and that could lead to an armed confrontation, because these ships are accompanied by naval vessels. And of course that could ultimately lead to war,” says a veteran senior diplomat on condition of anonymity

“We are preparing for all eventualities on all levels,” Greek defence minister Nikos Panayotopoulos told Skai News on Thursday, without elaborating. The navy’s chief of staff, Admiral Nikos Tsounis, added: “We shall not wait for anyone to come and help us. Whatever we do, we shall do alone.”

Greece has ordered the expulsion of the Libyan Ambassador Mohamed Younis AB Menfi, in the latest escalation of a dispute over a deal signed between Libya and Turkey on maritime boundaries in the Mediterranean.

Under the terms of a deal reached between Libya and Turkey on 27 November, Turkey gets access to a zone across the Mediterranean, ignoring the objections of Greece, Cyprus and Egypt, which lie between Turkey and Libya geographically.

The deal has added tension to Turkey’s ongoing dispute with Greece, Cyprus, and Egypt over oil and gas drilling rights in the eastern Mediterranean.

Greece is deploying special forces, armed drones and surveillance planes to protect Crete from a feared onslaught by Turkey t.co/gfgCTHME01

NATO is not part of the process to resolve problems between Greece and Turkey, alliance chief says. t.co/w3SPbBm7fR

Greek PM to argue that NATO "cannot remain indifferent when one of its members blatantly violates international law and that a neutral approach is to the detriment of Greece, which has never sought to ratchet up tensions in the area". t.co/LpJLB6EB5G

1. The Russian Foreign Ministry spokesperson, Maria Zakharova, has said Turkey and the #GNA must stop “actions that could further exacerbate the already difficult situation in #Libya and the Mediterranean as a whole.”

2. In a rare occurance, both Russia and the U.S. agree on something and condemned Turkey’s provocation against Greece. The U.S. State Department described the Turkish and Libyan GNA move as “unhelpful” and “provocative.”

4. Things are escalating in the eastern Mediterranean. #Greece has turned on its S-300 system in #Crete in response to Turkish-Libyan GNA plans to steal Greek oil and gas.

5. Things are really escalating now in the Eastern Mediterranean. The 547th Airborne Batallioj in Rethymno and the 1st Squadron based in Chania, both cities in #Crete, have been put on high alert. Hopefully the Turks decide not to go ahead with stealing Greek maritime space.

6. This is the range of the Greek S-300 system in #Crete that covers all the oil and gas deposits that Turkey and Libya are trying to steal. 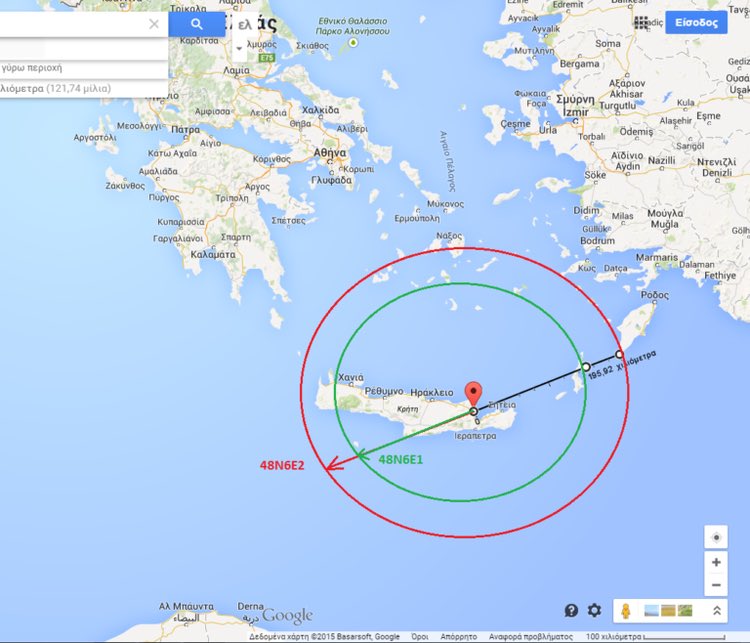 In a rare occurance, both Russia and the U.S. agree on something and condemned Turkey’s provocation against Greece. The U.S. State Department described the Turkish and Libyan GNA move as “unhelpful" and "provocative."

Professor of Economics and Geopolitical Theory of the University of Athens Ioannis Mazis, speaking in the program “Alpha” Municipality of Verkio, characterized the situation in the Eastern Mediterranean and the Aegean after the recent Turkish challenges as being “almost at war.”

“No matter how painful it sounds, the situation with Turkey is almost at war. They claim direct territories of Greece, maritime zones raw, and even on the basis of international law.”

“As strange as it may seem, a number of terrestrial masses, such as the Dodecanese, Crete, are ignored…,” he added.

“In any interpretation, it is a war situation,” he stressed.