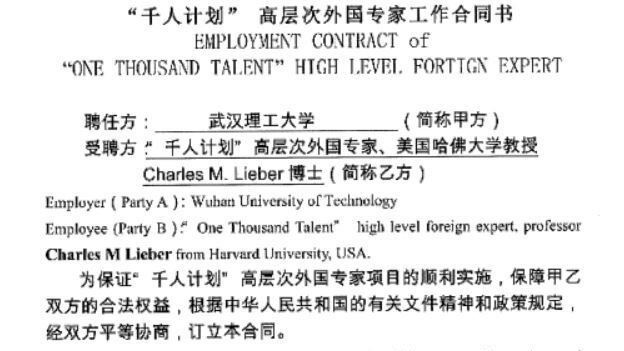 An FBI affidavit that lays out the case against Charles Lieber includes what federal prosecutors say is a contract between the Harvard researcher and a university in China.

Charles Lieber, the chair of Harvard University’s Department of Chemistry and Chemical Biology, has been arrested and criminally charged with making “false, fictitious and fraudulent statements” to the U.S. Defense Department about his ties to a Chinese government program to recruit foreign scientists and researchers.

The Justice Department says Lieber, 60, lied about his contact with the Chinese program known as the Thousand Talents Plan, which the U.S. has previously flagged as a serious intelligence concern. He also is accused of lying about about a lucrative contract he signed with China’s Wuhan University of Technology.

In response to the charges against Lieber, Harvard said in a statement to NPR: “The charges brought by the U.S. government against Professor Lieber are extremely serious. Harvard is cooperating with federal authorities, including the National Institutes of Health, and is initiating its own review of the alleged misconduct. Professor Lieber has been placed on indefinite administrative leave.”

The arrangement between Lieber and the Chinese institution spanned “significant” periods of time between at least 2012 and 2017, according to the affidavit. It says the deal called for Lieber to be paid up to $50,000 a month, in addition to $150,000 per year “for living and personal expenses.”

“Lieber was also awarded more than $1.5 million by WUT and the Chinese government to establish a research lab and conduct research at WUT,” the document states.

For a large part of the time frame in question, Lieber was also the principal investigator on at least six U.S. Defense Department research grants, with a cumulative value of more than $8 million, according to the affidavit. It also says he was the principal investigator on more than $10 million in grants funded by the National Institutes of Health.

“These grants require the disclosure of significant foreign financial conflicts of interest, including financial support from foreign governments or foreign entities,” the U.S. Attorney’s Office in Massachusetts said in a statement announcing the charges against Lieber.

In interviews with Defense Department investigators in 2018 and 2019, Lieber said that while he had heard of the Thousand Talents Plan, he had never been asked to be part of it, according to the affidavit. Lieber’s email correspondence suggests he signed a three-year agreement and employment contract with WUT in 2012.

“Lieber was obligated to work for WUT ‘not less than nine months a year’ by ‘declaring international cooperation projects, cultivating young teachers and Ph.D. students, organizing international conference[s], applying for patents and publishing articles in the name of’ WUT,” the U.S. Attorney’s Office said.

On its website, the Lieber Research Group at Harvard says its work is meant “to push scientific boundaries in biology and medicine.”

His “teaching assistant” was a member of the People’s Liberation Army, and the other was caught at the airport fleeing to China with biological samples.