“So They Want to Keep Raising Rates”

Higher interest rates will ultimately trigger the next recession as the entire debt construct will be weighted down by the burdens of cost of carry. And today’s inflation and correlated weakening retail sales data suggested that there’s price sensitivity already at these, historically speaking, still very low rates:

The Fed may find itself horribly behind the curve and this will have consequences.

Chart Technician Louise Yamada: The 36 Falling Rate Cycle Is over 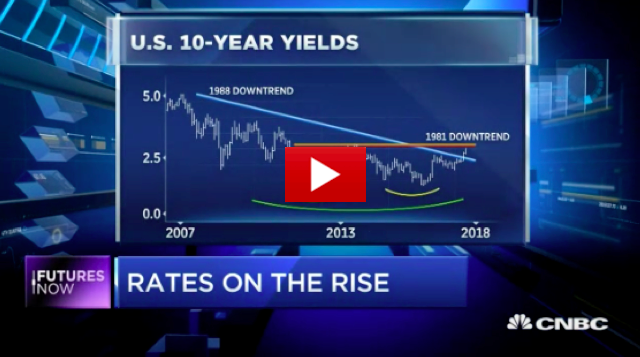 Rates are on the rise, as the 10-year yield nears a four-year high. Trading Treasuries now, with technician Louise Yamada.

Central Banks Are Preparing to Allow the Coming Crash to Happen

If you have been following the public commentary from central banks around the world the past few months, you know that there has been a considerable change in tone compared to the last several years.

10 year Treasury Yields are spiking to the ever-present danger level of 3% after a hotter than expected inflation report, and the dollar index is plunging.  Showing us perhaps the first signs of a potential stagflationary crisis. Bottom line – markets are not long for this world if yields pass 3% and the falling dollar provides yet another excuse for faster interest rate hikes.
The Federal Reserve is going to let markets crumble in 2018. They are going to continue raising interest rates and reducing their balance sheet faster than originally expected. They will not step in when equities crash. And, they don’t really need to. Trump continues to set himself up as the perfect scapegoat for a bubble implosion that had to happen eventually anyway. Now, the central banks can sufficiently avoid any blame.

Rickards: The Fed Can’t, and Won’t Try to, Prop Up the Market Forever

In some ways, it’s difficult to blame individual investors who don’t understand that the stock market has been artificially supported and propped up by the Fed for coming up on two decades without interruption. Who believe, truly, that when they rant about the glory of “the free market” they’re talking about the US stock market of today.
Not reality. There have been a variety of puts, or downside risk delimiters, in the form of Fed chairpeople and their actions for 20 years running:

As the Dow Jones industrial average fell over 2,600 points between Feb. 2 and Feb. 8, 2018, a decline of over 10% from the all-time high of 26,616 on Jan. 25, and officially a market “correction” as defined by Wall Street, one question kept repeating in investors’ minds: Where is the “Powell Put?”
This investor view is delusional.
All of these puts are predicated on precipitous, disorderly declines. If markets exhibit a slow, steady decline over months and years, the Fed put will not apply. In that world, the Fed’s response function would depend solely on inflation and job creation, the so-called “dual mandate.” Stock investors will be on their own.