At first the protests and now the coronavirus collide with the World’s Most Expensive Property Market.

The world’s most expensive housing market in terms of affordability for a median-income household is in Hong Kong, which also happens to boast the highest ratio of financial assets to GDP on the planet. That market is under huge strain as it reels from months of virtually non-stop political protest, the ongoing trade war between its two largest trading partners, China, and the U.S., and now the recent arrival of the novel coronavirus.

Values of Class A office buildings in the city fell last year by 7%. It was the first fall since 2008, according to the commercial real estate services firm JLL. Prices of offices as a whole finished the year at their lowest level since the second quarter of 2018. “There was a lot to deal with in 2019, but most importantly the market had been expanding for 11 years,” according to the report. “At a certain point, that had to change.”

The total transaction value of office and retail properties as a whole slumped 12.9% last year to HK$49.6 billion (US$8.9 billion), according to Bloomberg Intelligence. By December, Class A office buildings were registering a 6% vacancy rate, the highest level since April 2010 when the city was struggling with the aftereffects of the Global Financial Crisis. Rents for the segment also fell 3.4% for the year.

But that pales compared to the reverberations being felt across the retail sector, whose sales declined by a mind-watering 19% year-over-year in December, according to Hong Kong’s Census and Statistics Department. Sales of luxury goods — a huge part of Hong Kong’s retail industry — slumped by 37%. Many retailers have gone under or closed stores, resulting in a vacancy rate in core shopping areas of 9%, the highest in five years.

Most of the blame lies with the political crisis that broke out last spring and escalated into a crescendo of violence in the summer that decimated tourist traffic, particularly from mainland China.

Then came the outbreak of Covid-19, which compelled Hong Kong authorities to shut six of the city’s borders with the mainland. Average daily tourist arrivals plunged by 97% to 3,000 in early February from 200,000 a year earlierwhile many local residents have cut back on all but essential purchases, choking off retail demand.

So spooked are commercial real estate landlords by the scale of the slowdown that some have begun providing rental relief to help their tenants weather the storm. Henderson Land Development, the city’s third-largest developer, offered to slash rent by 60% to help out retailers. Hong Kong’s toy billionaire Francis Choi Chee Ming offered to lop 44% off rents at a 15,000 sq ft space at Plaza 2000 in Causeway Bay, after Prada refused to pay HK$9 million in monthly charges.

Keith Wu Shiu-kee, CEO of Sunlight Real Estate Investment Trust, a unit of Henderson Land Development, believes the impact of the virus on retail sales is likely to be far worse than during the protests, noting that in the second half of 2019 at least some tourists from the mainland were still arriving. He estimates that the plunge in total retail sales this year will be “clearly double-digits,” he said. “Whether it is 30%, 40%, or 50%, remains to be seen.”

Hong Kong’s residential real estate sector has so far weathered the storm slightly better, with home prices dropping 6.1% from a record high in June, according to the Centa-City Leading Index. The index even rebounded slightly in the four weeks through Feb 9 despite coinciding with the outbreak of COVIN-19 and the adoption of increasingly extreme measures by the Chinese and Hong Kong governments to contain its spread.

The effects of the virus are likely to take some time to feed through to property prices and transactions, just as happened with Hong Kong’s political crisis which began last March but didn’t noticeably hit the property market until the summer. Once the effects begin to be felt in the property market, it’s the luxury segment, which depends hugely on demand from mainland China, that will bear the brunt of falling prices, notes JLL.

Hong Kong real estate has been in an almost permanent boom since 2003, when the fallout from the SARS virus drove it to multi-decade lows. Since then, housing prices have risen five-fold, suffering just the briefest of dips in 2008, 2011 and 2015. Today, the prices are beyond the reach of all but the best-heeled residents and investors.

The annual Demographia International Housing Affordability Study, which ranks 92 major markets across the world based on affordability for median-income households, ranks Hong Kong at the top (with a score of 21), far ahead of Number 2, Vancouver, Canada (score of just over 12), and Number 3, Sydney, Australia (score of just under 12).

The chart below shows Hong Kong among metros with populations over 5 million, which excludes Vancouver, San Francisco, and other less-huge hot spots: 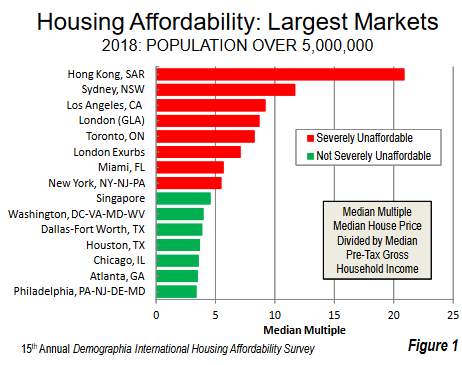 These and many other global cities have experienced insane housing bubbles, fueled largely by unprecedented central bank easing, yet over the past 10 years none of them has come even close to stripping Hong Kong of the dubious honor of being the world’s least affordable housing market.

That market is about to have its resilience tested. Prices in the luxury sector could fall by as much as 20% this year, says JLL. Not everyone agrees. According to a Bloomberg article bearing the optimistic title “Hong Kong’s Teflon Home Prices Are Virus Proof,” the fallout for the residential real estate sector is likely to be minimal, at least compared to the fallout for the commercial property sector.

The government is also desperately trying to reassure prospective home buyers and boost market demand by loosening mortgage loan-to-value (LTV) ratio rules. It is also about to unveil its biggest ever budget deficit to protect the city’s economy from “tsunami-like shocks,” according to Finance Secretary Paul Chan Mo-po. Banks are also cutting mortgage borrowers some slack.

But it may not be enough to save the the world’s most expensive property market from a very rocky 2020. As even the Bloomberg article concedes, if there’s “a drastic worsening of the economy”, Hong Kong’s “Teflon houses” may not prove to be quite so virus-proof after all. By Nick Corbishley, for WOLF STREET.