The DC Swamp is launching an investigation into the Maricopa County, Arizona, election and ballot audit.  This should not come as a surprise after several strategy sessions in DC between the White House, executive branch, congress and allied media have taken place.

The issue is: “how to keep the illegitimacy of the current regime from surfacing.” [pdf of letter to Arizona auditors here]

The 2020 U.S. election was filled with fraud; in order to retain that fraud extreme measures are now being taken to impede, block, halt and stop any election audit that will reveal the corrupt activity.   Congress has selected the House Oversight and Reform Committee to lead the effort against Arizona.  The Committee’s letter requests documents and communications related to Cyber Ninja’s audit procedures, funding sources, and related issues by July 28, 2021.

Washington, D.C. (July 14, 2021)— Today, Rep. Carolyn B. Maloney, Chairwoman of the Committee on Oversight and Reform, and Rep. Jamie Raskin, Chairman of the Subcommittee on Civil Rights and Civil Liberties, sent a letter to Douglas Logan, Chief Executive Officer of Cyber Ninjas, requesting information on his companies’ role in the “audit” of nearly 2.1 million ballots cast in Maricopa County, Arizona in the 2020 election. (read more).

The announcement comes a day after Joe Biden instructed all elements of the U.S. government and private sector to defend him against sunlight.

As mentioned by the installed occupant of the White House yesterday, the Biden Regime is preparing for a civil war against the American electorate to protect the fraudulent results of the 2020 election.

In addition to the full weight of the U.S. government, the Democrat National Committee, the Lawfare alliance, activist groups, the U.S. media and Big Tech social media platform control agents have all been enlisted.  All of the aforementioned groups represent the minority of the U.S. citizen base; however, they control the majority of the power structures and communication networks.

The United States Department of Justice is prepared to use federal law enforcement (FBI) to secure their position.  The purpose of the announcements should be clear to everyone.  We discussed and outlined the background previously.  {Go Deep 1} and {Go Deep Two}

In the background of these maneuvers corporate Big Tech, corporate U.S. media and those DC politicians under the control of multinational corporations, have been instructed to push the “domestic extremist” narrative.  Any organized and articulate truth-tellers are considered subversive, ie. against the interests of the U.S. government.  The January 6th DC protest is being used as an illustrative example for that narrative.

In an intelligence community controlled operation (ex. General Stanley McCrystal), ideological deplatforming, censorship, content removal and ultimately control of voices who would warn of larger issues, continues daily.  […] “The group, Defeat Disinfo, will use artificial intelligence and network analysis to map discussion of [opposition] claims on social media. It will seek to intervene by identifying the most popular counter-narratives and boosting them through a network of more than 3.4 million influencers across the country — in some cases paying users with large followings to take sides against [their opposition].” (source)

Let me be very clear… stop and hear the drums,  Something is about to happen.  Approximately 100 million American voters are considered dissidents now.

See also  SHOCKER: Most Democrats don’t want Biden as 2024 nominee: Poll. “The president hit new lows in approval among liberals (68%), southerners (33%), and people in the middle- to upper-middle income range (34%). Biden also hit a record low on approval from black adults at 31%.”

All rebellious activity that would provide evidence of the fraud is now labeled “domestic extremism”, and any entity who aligns with the objective to review or audit any election outcome will be targeted as an enemy of the installed regime.  The architects for the current weaponization of government are the same people who successfully installed President Barack Obama; and they are well funded by U.S. multinationals and overseas financing.

China is helping to finance a considerable amount of the activity through NGOs like the Brookings Institute and Lawfare, as well as funding multiple elements of the Biden syndicate directly.  In addition to in-kind contributions to the political effort, and ideological control over the platforms they oversee, Big Tech oligarchs are also providing hundreds-of-millions in defense of their own interests which are tied directly to the Biden White House.

The common adversary of all the above entities is the United States citizenry.

This is the landscape of the ongoing battle.

Things will get worse; much worse.

We are all insurgents now…

If you want to be able to effect change, you have to begin thinking of U.S. politics in general, and presidential politics specifically, as an insurgency.

Being part of a political insurgency means you accept the role of eliminating the apparatus you dislike, by taking a more strategic approach and destroying them from the inside. Hence, the Trump approach toward the RNC, and our support for it.

Expanding – It’s quite understandable to see frustration directed to the willful complicity of the RNC apparatus writ large.   However, we cannot defeat the GOPe UniParty objectives by allowing them to control the battle-space.  We must elevate our thinking, elevate our approach and remain committed to a much larger objective.

When the MSM Corporate Media-Machine says, Trumpist nationalism is destroying the traditional don’t be defensive; instead say: Yeah, so – it needs to be torn down.

When the pearl-clutching cocktail republicans decry the vulgarian uprising, don’t defend it, put it right back in their face.  We vulgarians are the majority, deal with it.

When the ruling class want to dictate the terms of national discourse, refute them; don’t apologize for your terms being 180° divergent from their desired approach.  This is an insurgency.

We are part of the largest political upheaval in the history of modern American politics. Embrace this fact.  Embrace each victory.  Break the cycle of “battered voter syndrome“, and feel empowered by your position in the common sense majority.  The control agents within the regime effort will have a much harder time attempting to destroy your sense of peace now.  They have thrown every possible label at you.  There comes a time when Alinsky attacks no longer have value because their initial shock value is exhausted.  We are in that moment.

Those who support Biden are in the physical minority. Look around, they know that.  That’s why they erected fences and walls to protect themselves upon their initial installation.  They are a fearful minority with little actual power over your life; that’s why they weaponize all the mechanisms to give the illusion of power.

Do not be afraid. Put on the armor of God and engage with your community as a band of brothers and sisters.  Act locally; act forcefully. Act deliberately.

When you must engage the mechanisms of the regime, do so with an insurgent mindset.  Throw sand into the machine when possible, and smile.

This approach can become visible in varying degrees of intensity.  State laws protecting voting integrity is only one facet.  Extreme federalism is the intentional use of the state right provisions outlined within the constitution to stop facilitating federal offices of any form or function.

Imagine if FBI field offices were forced to close by state action taking back ownership of the property by eminent domain. Imagine if state national guard elements were instructed not to comply with federal requests for support. Extreme federalism is local sheriffs, constitutional officers, rebuking unconstitutional decrees and refusing to comply with federal agencies. 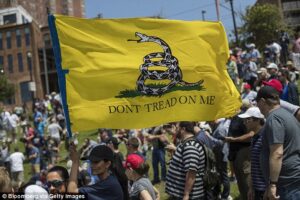 However, extreme federalism is the reverse scenario where the unconstitutional efforts are identified by states who create sanctuaries for law-abiding citizens who forcefully demand representative government and self-determination.

Extreme federalism is a reaffirmation of the original intent of the United States Constitution, and we do not need F-15s and nuclear weapons to achieve it.  What we need is strong–will, brave state-level leadership and unrelenting citizen determination.

We The People are the people we have been waiting for.

Parents and citizens confronting Marxist indoctrination within ideological school boards is one example.  That is why the Feds & Media are fighting back against visible grassroot activity.  They can sense this approach gaining wider acceptance as local populations see success in their efforts.

Local Sheriffs may soon align with the population they are sworn to protect and serve; that enhances the risk to the federal collective mindset.

State legislatures and State Governors taking back absolute control from federal overreach is a bottom up way for extreme federalism to have massive impact.  Local congressional district elections are then fought-out based on the priority of the local community.  Again, more original intent that is adverse to the federal collective.

Those behind the Biden administration, those who worked within the corrupt system to put him in office, can see how they might well lose control if this continues.

They are acting exactly as we would expect given this growing reality.

Control is a reaction to fear…..