Following the weak new home sales report, I’d like to update a couple of graphs.

For the economy, what we should be focused on are single family starts and new home sales. As I noted in Investment and Recessions “New Home Sales appears to be an excellent leading indicator, and currently new home sales (and housing starts) are up solidly year-over-year, and this suggests there is no recession in sight.”

Since I wrote that post, new home sales and housing starts have weakened.

For the bottoms and troughs for key housing activity, here is a graph of Single family housing starts, New Home Sales, and Residential Investment (RI) as a percent of GDP. 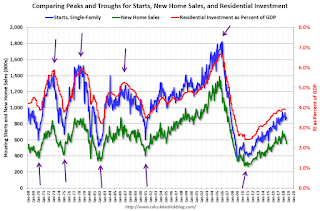 The arrows point to some of the earlier peaks and troughs for these three measures.

The purpose of this graph is to show that these three indicators generally reach peaks and troughs together. Note that Residential Investment is quarterly and single-family starts and new home sales are monthly.

RI as a percent of GDP has been sluggish recently, mostly due to softness in multi-family residential.   And it is too early to say that single family housing starts and new home sales have turned down.

Also, look at the relatively low level of RI as a percent of GDP, new home sales and single family starts compared to previous peaks.   To have a significant downturn from these levels would be surprising.

The second graph shows the YoY change in New Home Sales from the Census Bureau. 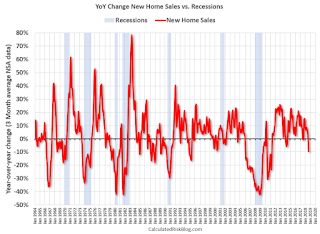 1) When the YoY change in New Home Sales falls about 20%, usually a recession will follow. The one exception for this data series was the mid ’60s when the Vietnam buildup kept the economy out of recession.   Note that the sharp decline in 2010 was related to the housing tax credit policy in 2009 – and was just a continuation of the housing bust.

2) It is also interesting to look at the ’86/’87 and the mid ’90s periods. New Home sales fell in both of these periods, although not quite 20%. As I noted in earlier posts, the mid ’80s saw a surge in defense spending and MEW that more than offset the decline in New Home sales. In the mid ’90s, nonresidential investment remained strong.

Although new home sales were down sharply in September, the decline isn’t that large historically (at least not yet).

Miss on New Home Sales-Units — the trend does not look good! pic.twitter.com/m2SpPREMg7

If you are middle class and or in the bottom 90%, President Trump does not want you to see this chart. pic.twitter.com/a4IWptUe68