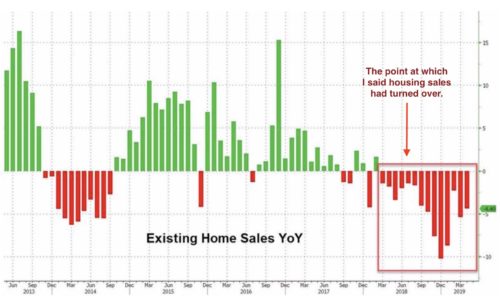 The graph here shows the point at which I said early last summer housing sales had turned over (for the worst) and would remain on a downtrend indefinitely, and it shows how that prediction has panned out.

Existing home sales were down again nationally (4.4%) in April (fourteenth month in a row of declining sales year on year). That is the longest stretch without a single positive month since the housing-market collapse that brought on the Great Recession.

So far as I am aware, I was the first to state that what we had seen by the start of July, 2018, was clear evidence that the housing market was going into another decline. I pointed to the Seattle/King County market as the bellwether at the time because it had been the strongest and last market to collapse during the last housing crisis, so trouble in that robust market is trouble, indeed.

Prices are now down 3.5% in Seattle YoY. Another hot market in Washington State has been the tri-cities area in Eastern Washington where the median price is now 12% lower than a year ago. Redmond, WA, home of Microsoft, prices down 18%. Pricy Mountain View, CA, (between Palo Alto and Santa Clara), prices down 2.2% YoY. Portland, OR, prices down 1.2%.

For several months, it was mostly just sales that were down. As I said at the time, it would take awhile for prices to follow because sellers are highly resistant to dropping the value of their number-one asset; so, the squeeze needs to be on for awhile for median prices or average prices to fall. Well, the squeeze has been on long enough, and sellers are starting to capitulate to the long drop in demand. Prices are falling.

I don’t think prices will probably fall as hard this time because the Federal Reserve probably will jump in sooner if it can, but there is not a long ways the Fed can go to lower interest or ease credit terms either in order to stimulate the market. Credit terms are already pretty slack.

I also don’t think the housing market will be the primary cause of the overall economic collapse we are slowly going into this time around, as it was last time; but it will be a contributing cause to the bursting of the everything bubble, along with Carmageddon, the Retail Apocalypse, the trade war, the bursting of the bond bubble and the credit bubble and student loans, and a deeper stock-market crash, the fall of China’s economy and Europe’s — all the things that I have been saying for the last couple years will be the major forces to watch that will determine the tractory of our economy.

[You can check what is happening in home prices wherever you want at this link on Zillow.]

A review of the year ahead

All of these things that are consistently continuing to get worse and exert their own gravity on the US economy were on my January list titled “2019 Economic Headwinds Look Like Storm of the Century,” which was my first Premium Post (the reward I offer to all who support with donations of $5 or more).

All of these things and the rest of the items that I covered extensively in that list are playing out this year as I said they would, with the the exception so far of repatriated tax money, which is still more in play in stock buybacks than I thought it would be, and GDP, which took what I believe will prove to be a temporary bump back up. I remain as certain now as I was then that everything on that list will continue to build negative pressure against the economy, and with five months now to judge by, the list stands on its own merits.

Let me share my one statement on housing in that list so you can see how each point gets exploded in detail:

Housing over the hump: We all know the American economy has long been designed for housing growth to be its major driver. Nearly two years ago, I said the Fed’s balance-sheet unwind, which primarily impacts long-term interest rates, would drive down the housing market. I’ll have a full article on housing soon, but suffice it to say in this headwinds overview that we saw a housing decline begin in 2018, and it will grow worse in 2019 as mortgage rates rise even further. New housing feeds real-estate agents, mortgage brokers, bankers, developers, road crews, carpenters, landscapers, drywall installers, painters, plumbers, electricians, furniture salesman, cabinetmakers, glazers, appliance manufacturers, furnace manufacturers, lumber mills and loggers, the grocery stores, restaurants and gas stations that supply them all. You get the point, and that is why we build our economy around it. It’s why so many people want immigrants (partly for cheap labor and partly because they will need more housing). That is a minuscule part of the total list of people who make money off of new housing and off of remodeling old housing. So, with housing now clearly going down, the economic impact comes down to simple math: higher interest equals higher payments in a land of flat wages, which means fewer buyers and/or lower prices to get the payments back down. Housing sales and prices are falling now in Australia and Canada, too.

And this decline was triggered by only a minor nudge upward in mortgage rates because the Fed quickly reversed course on all of its tightening plans, bringing mortgage rates back down. Yet, the damage is done as shown by the fact that housing continues to decline, even though interest rates have stabilized barely higher than they were. (See Wolf Richter’s “US Home Sales Drop, Drop, Drop Despite Lower Mortgage Rates. But Mortgage Applications Jump. What Gives?”)

Because of the importance of my January list (which has now proven itself) to understanding where we are going in the remainder of this year, I’ll make sure you have back access to that original Premium Post after donation payments process at the start of June if you sign up to donate before the end of May.

(Premium Posts don’t come every month, but close to it. I write them as a special thank-you for voluntary donations, not so much as a subscription. Those who want to support what I’m trying to do here will get some of my most important material because they have made themselves part of a team effort to get people stirred up before the next bankster bailouts are tried (and they will be); but I try to keep as much of my writing free as I can because the goal is, after all, to get the word out as far and wide as possible. About twenty other websites publish my articles besides my own site, but none of them pay for content. A number of people have signed up well above the $5 level that gets you into the Premium Posts, and I thank them for seriously backing what I’m trying to do here. I thank everyone for doing what they can as I do what I can.)