(The Telegraph) — Odds of a ‘no deal’ Brexit next week have risen markedly, as the Commons fails to coalesce around a viable alternative to Theresa May’s deal, while once again rejecting the “best possible deal” negotiated between the prime minister and the EU27, albeit by a smaller, yet still considerable, margin than in the past. 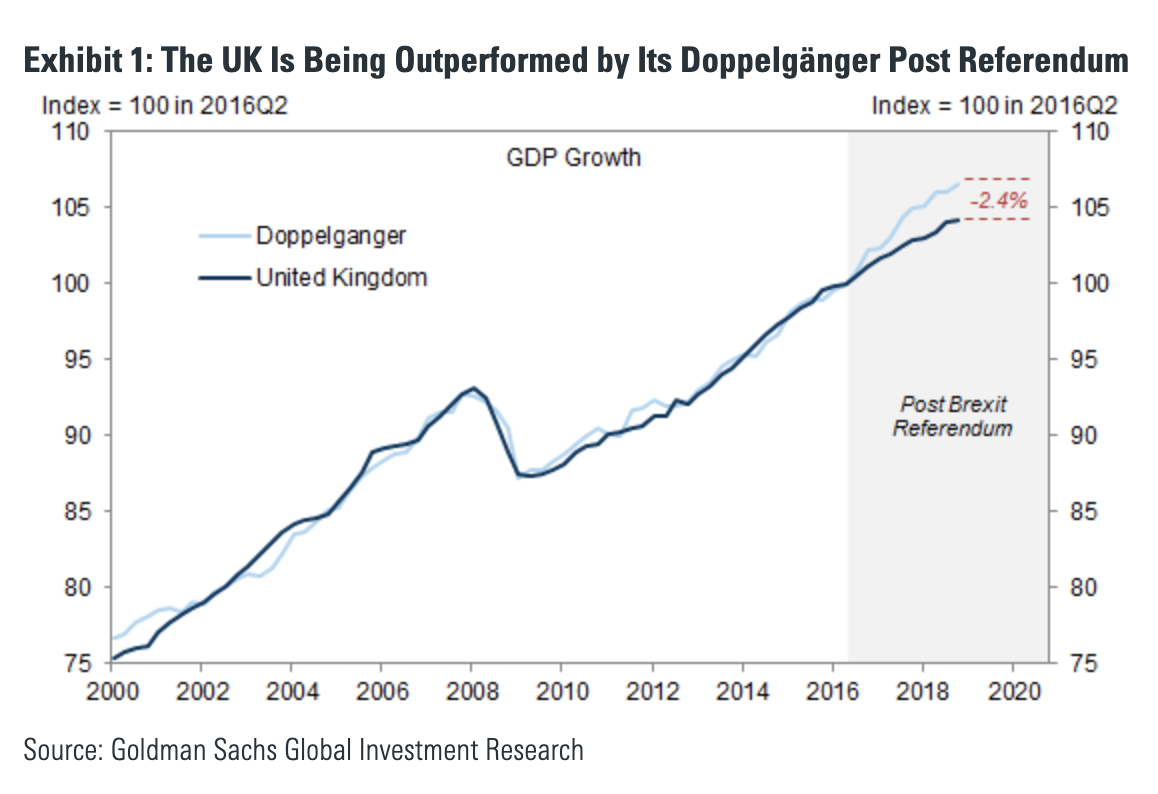 This is why, for the first time in a while, speculation about ‘no deal”s impact, not only on the UK, but on the European, and broader global, economy is at the forefront of the market’s mind, as investors have finally been forced to confront the reality that the UK crashing out of the EU next week isn’t only possible, but extremely probable.

To that end, analysts at Goldman Sachs, who have been closely chronicling the Brexit trainwreck since the referendum, have attempted to quantify the economic impact of Brexit in the two-and-a-half years since the referendum, and use it to extrapolate what might be in store not just for the UK, but for all of Europe, if Britain leaves without a deal next week.

The bank’s findings are alarming, to the say the least.

To begin, its analysts quantified how the uncertainty bred by the chaotic and dysfunctional Brexit negotiations has inspired businesses and consumers to put off investments and consumption, and compared it with a “doppleganger” model illustrating the counterfactual state of the UK in an alternate reality where voters elected to remain.

Using these models, Goldman calculated that Brexit has already knocked 2.4% off the UK’s GDP, or about £600 million pounds ($671.3 million) every week since the referendum.

Given that the bulk of this (theoretical) loss has been attributed to business investment, Goldman has extrapolated that analysts have underestimated the impact of the “political uncertainty” surrounding the Brexit process. 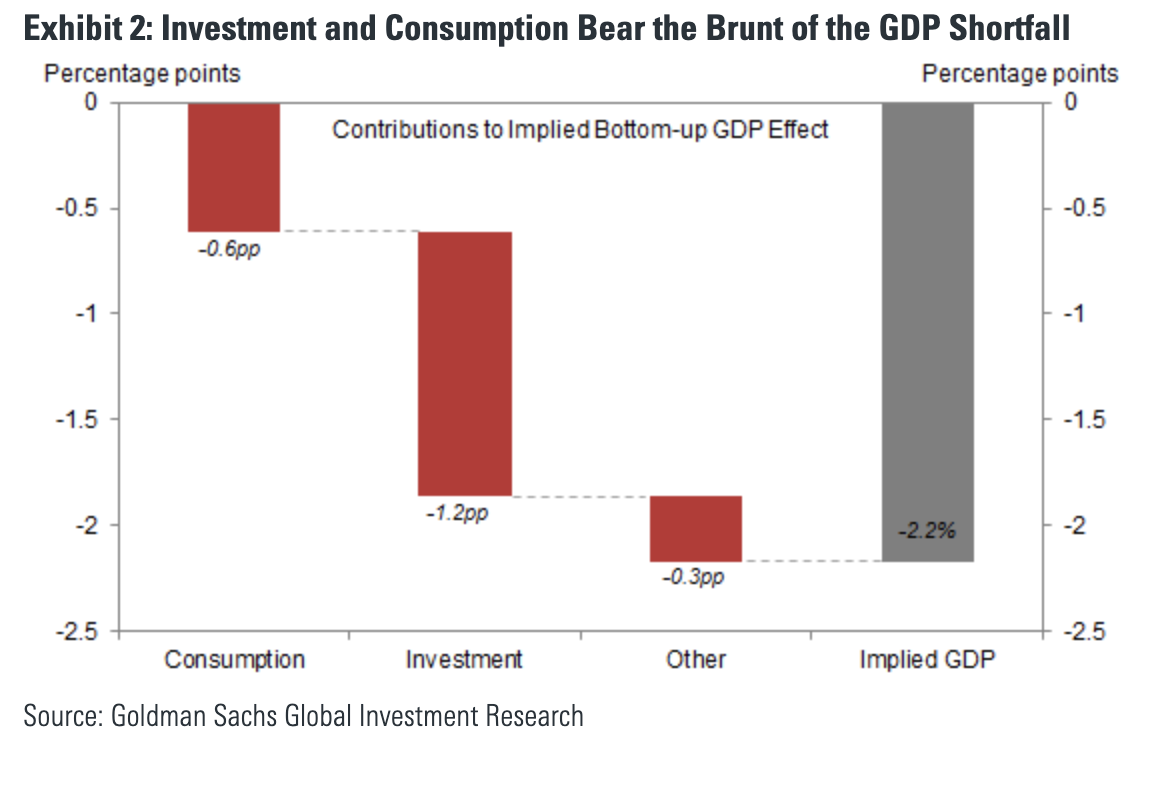 And after establishing via a complex event-based factor analysis that Brexit-related uncertainty has been the primary driver of uncertainty in UK markets and investment over the past 2.5 years… 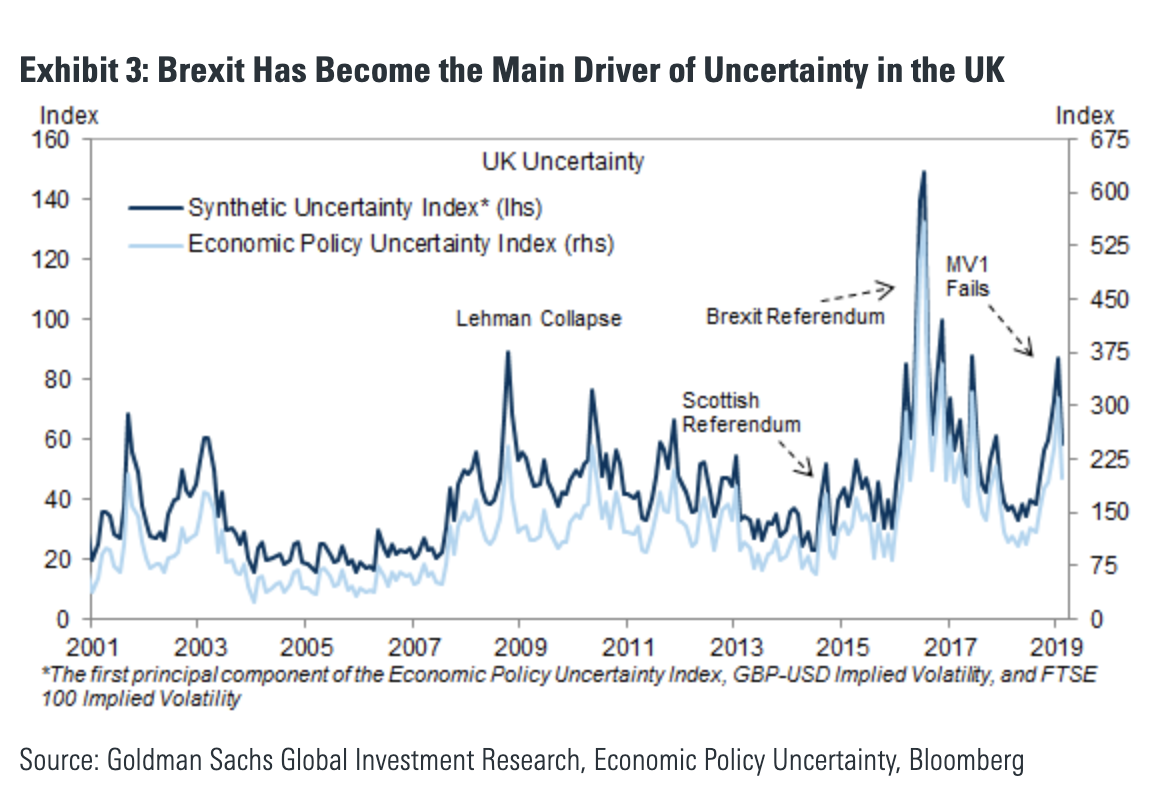 …The analysts concluded that the flare-up in Brexit-related uncertainty since the start of the year shaved 5% off QoQ investment growth during Q1. 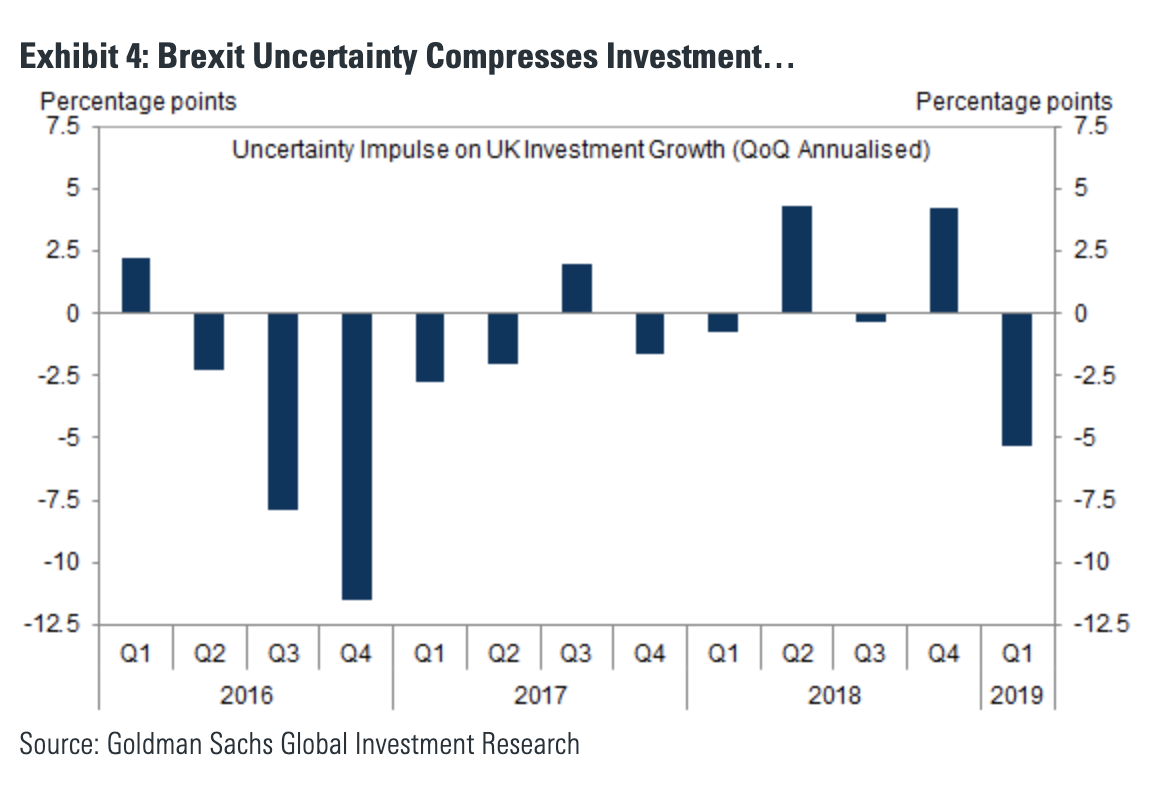 In a finding that raises questions about the pan-European manufacturing recession that has emerged over the past few months, the analysts found that investment in large capital goods (planes, trains and equipment) and services (hotels and restaurants) are the most exposed to this type of uncertainty. 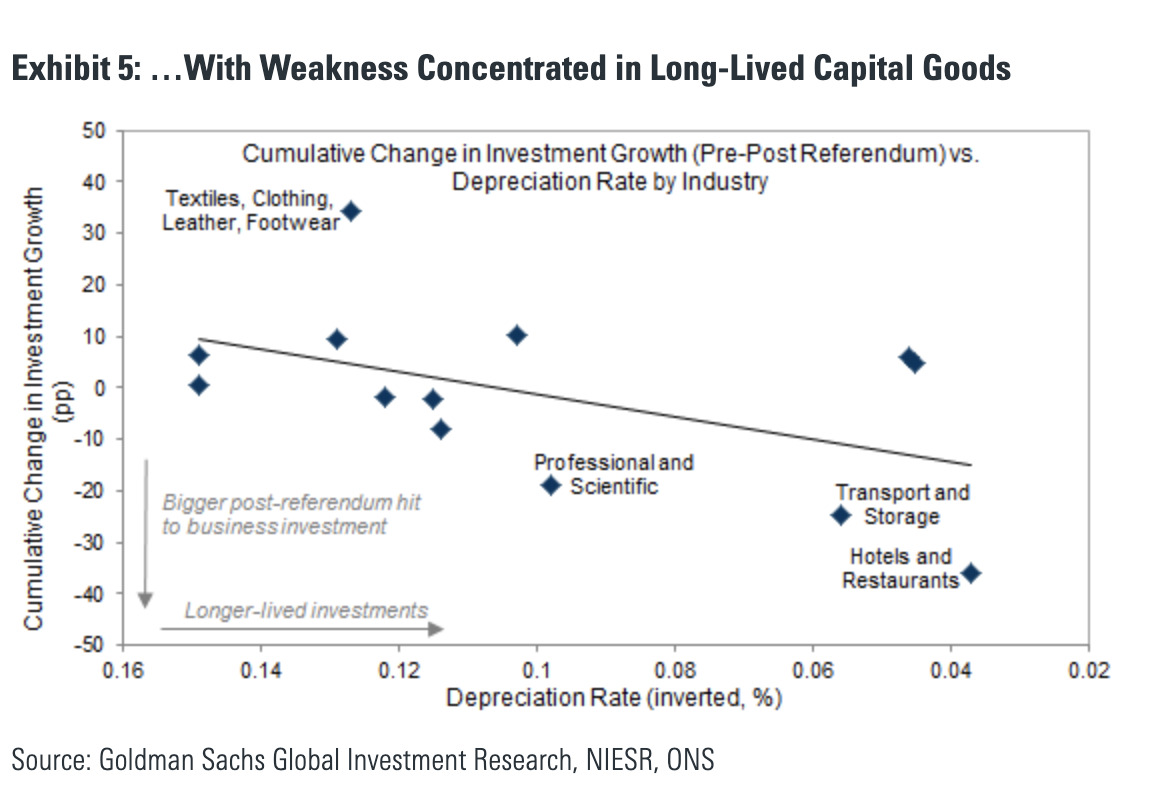 Looking beyond the British isles, Goldman illustrated how the Brexit referendum result rippled across global markets, exerting the biggest impact on the riskiest debt across the world, but especially in Europe. And since a ‘no deal’ Brexit could be just as much of an economic shock, there’s reason to believe that this type of reaction could repeat itself… 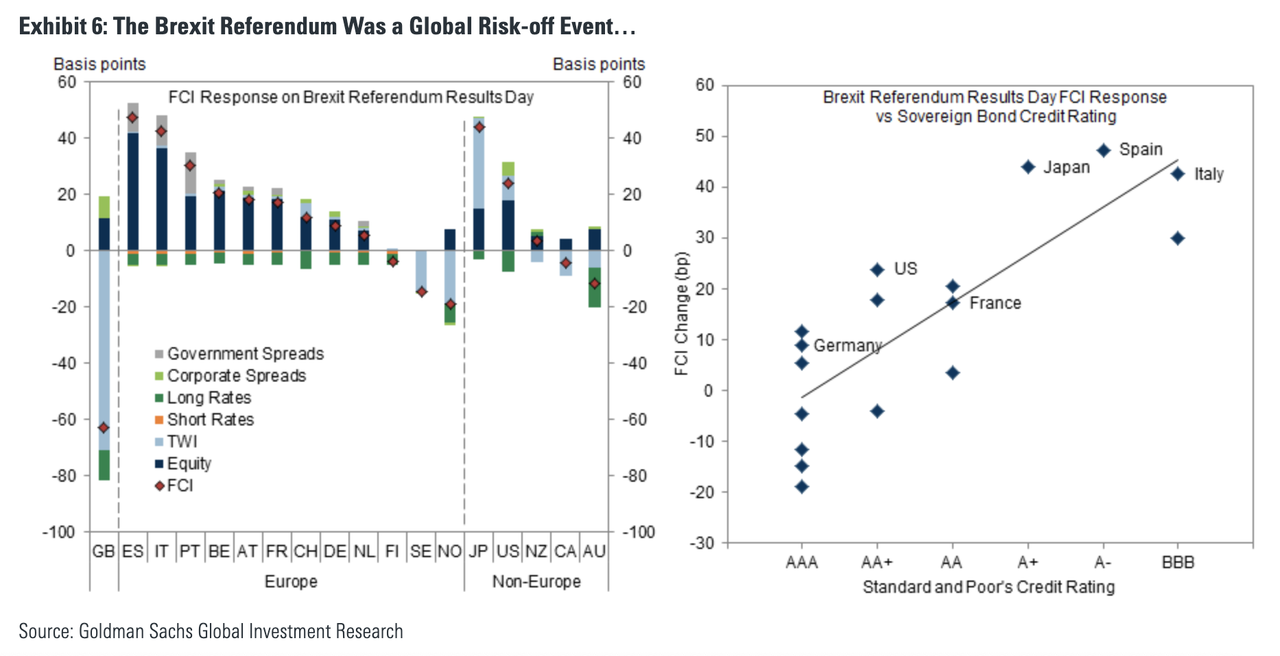 …Even though Brexit-related event risk since then has mostly been confined to countries with significant export exposure to the UK. 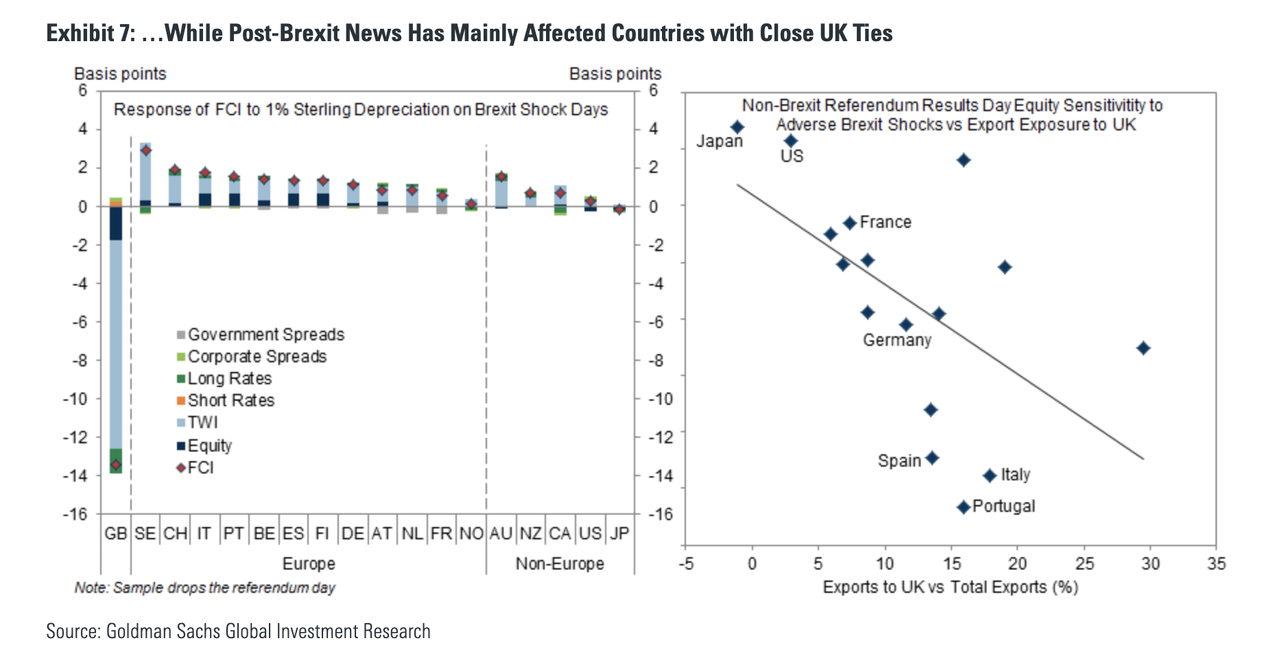 Yet, while leaving next week with a deal could be a tailwind for the UK economy, according to Goldman’s analysis of output costs, “no deal” could have a substantial impact on European GDP for years to come. 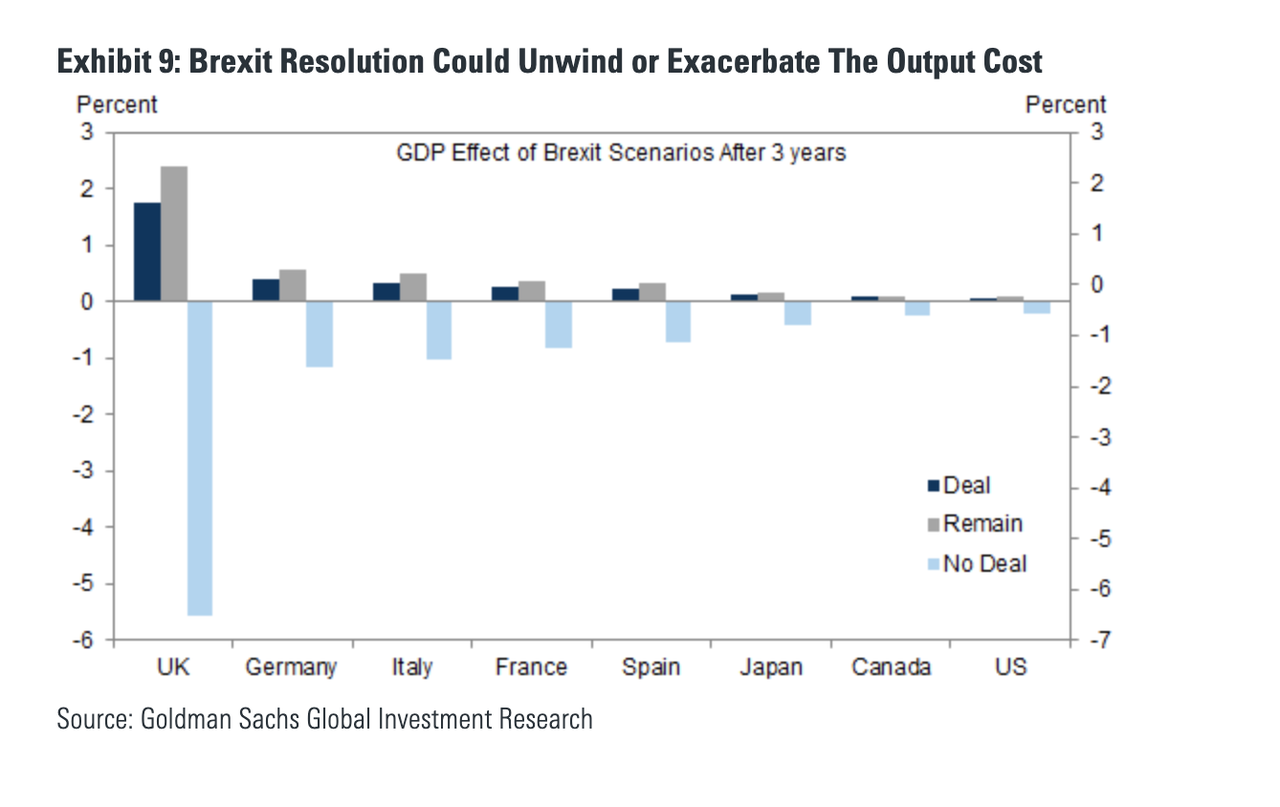 With the EU declaring that a “no deal” Brexit is now a “likely” scenario, the Telegraph’s International Business Editor Ambrose Evans-Pritchard offered a haunting analysis of the ramifications of ‘no deal’ for the fragile European financial system, warning that the economic shock of a no-deal Brexit – coming at a time when manufacturing activity is already weak – could redound to a pan-European “Lehman-style” crisis, thanks the disruption in trade and its impact on growth.

The European Central Bank can – presumably – handle the immediate shock of a financial and trade rupture by relaunching bond purchases and compressing Italian yields. What the ECB cannot handle is a third economic recession in a decade. This will lead to a credit crunch and play havoc with Club Med debt dynamics.

Let us call it creeping Lehmanisation – until the dam breaks and risk spreads go non-linear.

Taken literally, the EU’s Brexit position implies barriers (certification, delays etc) on imports of Airbus components for factories in Toulouse and Hamburg. Every wing is built in the UK at a hi-tech plant in Broughton and there are no stockpiles.

Airbus has already stated that a full breakdown in cross-channel trade would lead to losses of €1bn a week. The supply chain would “fall apart”. Some 4,000 UK firms supply more than 10,0000 aircraft parts. These include Rolls-Royce engines. The biggest industrial venture in Europe with 108,000 employees would be hobbled for as long as Brussels stuck to its hard-line policy.

What’s worse, with the ECB already backing away from its plans to tighten money policy by leaving interest rates on hold at least through the end of the year, the Continent’s one bulwark against unmitigated financial peril would have few options to quell the fallout.

See also  Obama: "if I could make an arrangement where I had a front man doing all the talking..."
442 views