It’s a debt bomb of epic proportions—nearly 1.5 trillion dollars and climbing fast which has enslaved an entire generation of Americans. Add credit card and auto loan debt and the total amount of that debt is nearly doubled. And you know who initiated this apocalyptic debt trend? None other than Barack Obama. You think it was all some sad mistake by a well-meaning president gone bad? Think again…

The “Before Obama” and “After Obama” figures make clear how the millennials were targeted for what has to rank as one of the most damaging bait and switch frauds in human history. Feed them easy money for college courses that have no application in the real world, give them a near-worthless piece of paper at the end, and charge them tens or even hundreds of thousands of dollars for being victims of the scam. 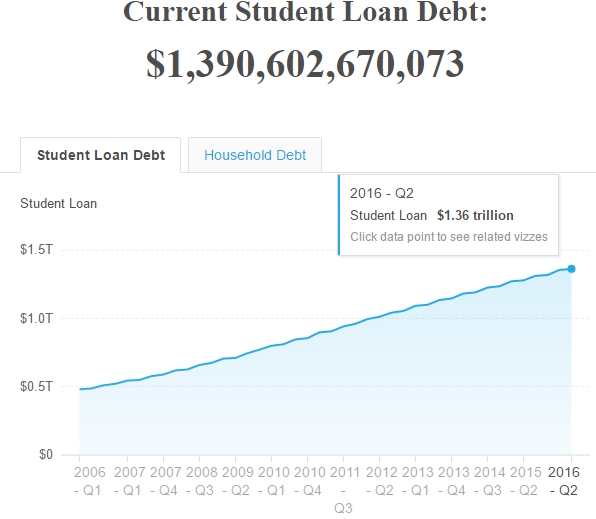 During the Obama years student loan debt increased by nearly 300%.  As president Obama quickly moved to federalize the entirety of the student loan program and then threw deficit-spending money into it at a rate never before seen. The results were as predictable as they were damaging. Young adults took the easy money, spent it, took some more, and in the end, found themselves burdened by crushing debt which left them totally beholden to the payback whims of the federal government. And don’t forget, what Barack Obama did for student loans he also did for credit card and auto loans. More and more easy government money targeting millennials.

In short, it was the calculated enslavement of nearly an entire generation of Americans.

Check out this commentary from longtime political cartoonist, Ben Garrison:

The stock market flew up for ten years because of low interest rates and there was no other place investors could go and make good returns. The markets were also helped by many big companies conducting stock buy backs. But now the stock market seems to be in balloon territory. Some of the valuations bordered on the ridiculous. Tesla, for example. Its pot smoking CEO was forced to step down for a while for making claims he could not back up. Amazon briefly reached $2,000 per share. Who can afford such a thing? Certainly not millennials. Nearly one third of them have been forced to move back in with their parents. Many have college degrees funded by massive debt. They can’t buy homes, let alone invest in the stock market. In fact, the majority of Americans can’t afford to dabble in the stock market. Many are also deep in debt and living paycheck to paycheck. Massive debt is choking the entire system.

THAT has been the plan all along. The election of Hillary Clinton was meant to finalize that process. Then Trump happened and the globalist table was nearly turned over. Nearly—but not quite.

The Federal Reserve initiated an unusually aggressive series of interest rate hikes that didn’t just tap the brakes on the zooming Trump economy but brought it to a screeching halt. Think about that. The economy is poised to stall, perhaps drop into a recession, and interest rates will then also be higher. The student debt bomb will be that much more debilitating to say nothing of the national debt, entitlements, etc. President Trump knows that the only successful way forward for America is to grow ourselves out of this mess. That is why he is working so hard to reform the disastrous trade imbalances that have weakened the United States to the point of perpetual insolvency. The globalist powers against him are clearly using the debt burden that was initiated during the Obama years to counter the positive impacts of Trump’s America-First economic platform.

And it’s working. The globalists are on the march again as President Trump moves to counter their attacks but he is being forced to fight on multiple fronts. (example: Mueller investigation) Even though he has proven himself to be a man with seemingly inexhaustible energy and determination, the accumulated attacks against him have to be taking a toll. A deep recession months before the 2020 Election might be just enough to finally buckle the knees of the Trump presidency. The millions of millennials who are now horribly in debt will be used as the head of the electorate spear that will pierce the armor of a president and send him packing on Election Day. Those millennials will want someone to blame (besides themselves, of course) and the media will make certain President Trump will be the easy target they seek for their unhappy, debt-burdened lives. It will be an army of discontents created by Barack Obama and soon unleashed to put the final nail in the coffin of the America we once knew: A better America. A stronger America. A sadly soon-to-be forgotten America.

Is it all really so grim? Yes. Is there any hope to stop the globalists? Possibly, but it won’t be easy—perhaps not even likely.

You need to be engaged. You need to be aware. You need to be willing to educate others as to what is really going on. Don’t shout at people. Talk with them. Share your own knowledge but don’t pummel others with it. In order to win the globalists need us more divided than ever. If you let anger overcome reason they will succeed in doing just that.

The real resistance is here. It is now.