by Viraj Shah
Central Banks across the world started investing in equities when yields fell. These way even conservative investors were forced to start investing in equities in order to earn higher returns. Central banks changed their policies to allow this shift to happen. Countries like Russia, Turkey, South Africa, or Switzerland, banks are now moving towards a policy of lower interest rates. However, certain section of investors continues to invest in gold and consider it as a safe heaven. 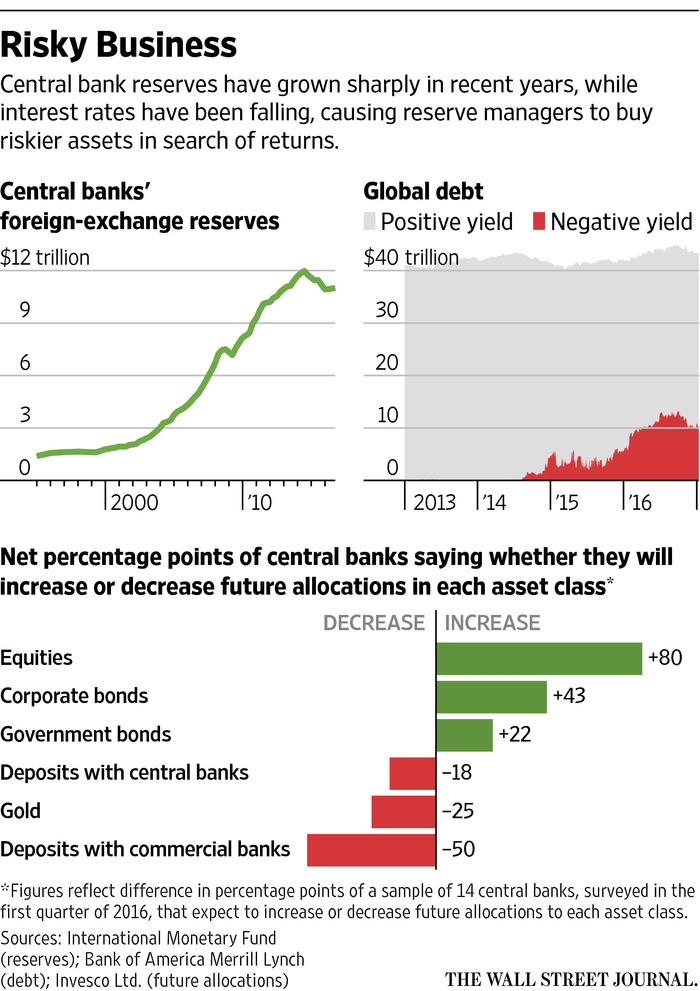 www.wsj.com/articles/central-banks-embrace-risk-in-era-of-low-rates-1485133603
As foreign reserves are growing with the banks, they are looking forward to riskier investment options which include corporate bonds as well as equities. The role of central banks looks more politicized in countries like Turkey. Analysts at Wall Street expected the central bank at Turkey to keep the benchmark repo rate to 50bps. Some even expected the repo rate to go as high as 75bps (an extreme case 100bps was also expected). The analysts believed that the literal collapse of the Turkish currency Lira would be making the central bank take precautionary steps.
However, the bank changed the overnight lending rate by 75 bps but did not make any changes to the overnight benchmark repo rate which remained at 8% as before. The central bank argued that they are keeping inflation under check and if needed, further monetary actions will be taken to curb inflationary trends. Food prices continue to remain volatile. Even though there are signs of a moderate recovery, inflation will tend to rise in the short-term. However, Turkish President Erdogan is keen on citing foreign conspiracies to raise inflation and overthrow his government. (Source: Central Bank repo rate remains unchanged)
A similar central bank situation is arising in Russia as well. The Director of the Monetary and Credit Policy Department, Igor Dmitriyev, stated in his address to the State Duma lower house that any hasty decisions by the central bank may cost its credibility. The inflation rates are lower in Russia and the road to economic recovery is smoother. However, the central bank is not intending to cut back the interest rates as of now. Russia is on a record low inflation rate of 5.4% but the monetary policy will be softened only gradually. Immature decisions may mean a lower trust on the Ruble. Moreover, households may stop strict savings which may lead to an economic downturn if external factors also combine.
How Investors suffered?
Investors will be hurt in such economic times where central banks are not ready to allow a more liberal monetary policy and in turn are pushing towards riskier investment avenues. Countries in the Far East are also touched with excessive central bank control. In fact, the Bank of Japan has become the main shareholder of many public companies. It already exercises control over corporate bonds.
Excessive control on the market by the central bank and politically motivated moves in many countries are putting investors at a serious risk. There is a need for fiscal policies and not just monetary pushes to these troubled economies. Till these steps are taken, investors may have to depend on precious metals to find safer investments.
Conclusion:
Central banks decision to invest in equities may very well prove costly due to uncertainty and geopolitical risks. Investors would hope that they don’t see a crisis emerging out of the decisions taken by central banks.