Apple. Just like the fruit that serves as its eponym, the tech giant’s truly global brand is recognizable everywhere. And the company, famously founded by the legendary Steve Jobs in 1976, has gone from strength to strength since.

From the game-changing iPod to the now ubiquitous iPhone, Apple has continued to innovate. With the departing decade having brought us the iPad, Apple Watch, and MacBook Air, Apple is positively disrupting the way we listen to music, access the internet, and communicate with the world.

And now, it’s changing the way we pay.

First introduced in 2014, Apple’s very own mobile wallet allows consumers to use their Apple devices to make digital payments; in-store, online, or to each other via peer-to-peer transfer. Backed by biometric authentication, Apple Pay provides a more secure, convenient, and completely cash-free way for us to part with our hard-earned money, all from our smartphones, laptops, or tablets.

Sounds great, right? Merchants get to serve quicker and cut down wait times, while customers don’t have to worry about carrying cash around, or becoming a victim of credit card fraud. But, uh… what’s in it for Apple?

Let’s take a look at three ways in which Apple Pay profits from web payments, and the benefits for Apple that go far beyond the monetary. 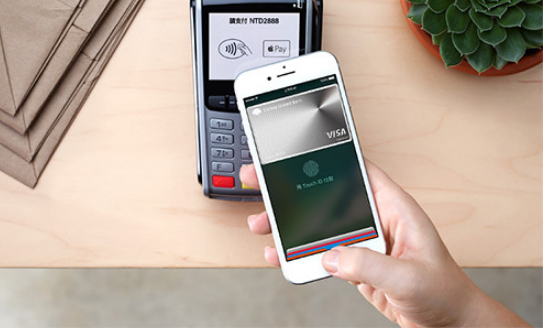 1) A PROFITABLE SLICE OF THE PAYMENTS PIE

We’ll start, however, with the monetary. Though Apple keeps pretty quiet about its exact margins, it’s rumored that it takes a cut of around 0.15% of every transaction made with Apple Pay. That’s 15 cents Apple makes off every $100 transaction.

Seems modest, right? Well, let’s do the math. In Apple’s earnings call just a couple of months ago, CEO Tim Cook reported a yearly total of three billion Apple Pay transactions. We don’t know what that equates to in value, but let’s say (at the very minimum) that each transaction averaged out at $3 – the price of a cup of joe.

That’s nine billion dollars in transaction volume. 0.15% of that figure would give us Apple’s share – a whopping $13,500,000. And even that’s just the tip of the iceberg – a hypothetical figure, representing the very least of Apple Pay’s profits.

We can’t say exactly how much Apple Pay is making on web payments, then. But what we can say is that the figure is growing. As we begin 2020, Apple Pay’s transaction volume exceeds PayPal’s, while the former also boasts a growth rate of around four times that of its rivals.

On top of this, Apple Pay’s user base has been growing, too – and fast. As of September 2019, Apple Pay boasted 441 million users. That’s up from 292 million one year earlier, and just 67 million in September 2016. It’s… impressive, to say the least.

But what’s more impressive is that Apple Pay isn’t taking this lucrative slice of the pie at the expense of the customer. Nor is it taxing the hardworking shopkeeper, either. Rather, Apple takes its cut as a part of the interchange fee – the tax already levied on cardholders and merchants by card networks, such as Mastercard, Discover, Visa, and American Express.

Interchange fees constitute a percentage of each transaction made with a credit or debit card. These fees go to the various parties involved in facilitating a card-based transaction – the customer’s bank, the merchant’s bank, and the payment gateway that processes and secures the sale.

By securing a sweet cut from the card networks, Apple Pay doesn’t need to charge any additional fees to the parties benefiting from its service. That makes Apple Pay profitable, while also doing away with any potential barriers to the mobile wallet’s widespread popularity.

It encourages people to buy their products.

You can only benefit from Apple Pay if you have an Apple device to use it on. Apple Pay is solely compatible with the iPhone, while you’ll need the iPad to utilise it to pay with a tablet. The speed, style, and seamlessness of Apple Pay (as well as its growing acceptance rate in stores) is an excellent selling point for luring in an increasingly tech-savvy and aesthetic-conscious generation of consumers.

The wild popularity of Apple Pay is also reflected in the visible evolution of the company’s products. 2016 saw Apple add a ‘touch bar’ to its long-standing line of laptops, the MacBook, to aid users with basic functions such as typing. In 2018, however, the touch bar was updated to facilitate touch ID – meaning MacBook owners could make biometrically-secure payments directly from their laptops.

In other words, Apple Pay provides an incentive to buy not only into Apple’s existing range of gadgets, but also to buy the latest – the fastest, the most well-equipped… the most expensive.

It’s a rare kind of marketing – one that pays for itself.

Once a person does buy their first Apple product, chances are it won’t be their last. Apple’s consistently high NPS (Net Promoter Score) ratings indicate that it’s remarkably good at retaining its customers. Research recently reported that Apple’s operating system, iOS, had loyalty rates of around 89%. How come?

With an excellent customer relationship management strategy, that’s how.

Think about it – all Apple device owners have to sign up for an Apple ID, providing their name and email address in the process. This ID synchronizes across multiple devices, allowing Apple to remember a customer’s purchases with the Apple Store, and provide personalized recommendations for music and films.

For Apple, it’s a self-renewing, seemingly limitless data set, allowing it to constantly tailor its services and re-engage customers with handpicked deals, discounts, and products. Not only is this targeted marketing done effectively, but it also engenders a sense of loyalty and familiarity with Apple’s brand and ethos.

When it comes to making money on web payments, then, it’s clear to see how Apple does it. By making its mobile wallet solution free to use, and promising more security than the standard plastic card, Apple Pay has quickly risen to heights still only dreamed of by the likes of Google Pay (formerly Android Pay) or Samsung Pay.

As well as all the big names, Apple Pay has partnered with hundreds of thousands of retailers, apps, not-for-profits, stadiums, ATMs, and more. Across the pond, it even has a deal supporting London’s public transport system.

Having proven its power, Apple Pay is now playing on its exclusivity – you’ll need an iPhone, iPad, Apple Watch, or a MacBook from 2018 or later to use it. You’ll buy in with the purchase of an Apple product, and so become a part of Apple’s marketing infrastructure… an easy place to end up, yet not such a straightforward one to leave.

Are you ready to take a bite?

Rob Binns writes for Expert Market, a leading B2B comparison site empowering businesses across the UK and beyond.

He specialises in analysis of merchant accounts and the payment industry.

He’s happiest when unpacking the latest contactless trends and technologies, and discussing what these insights mean for business owners