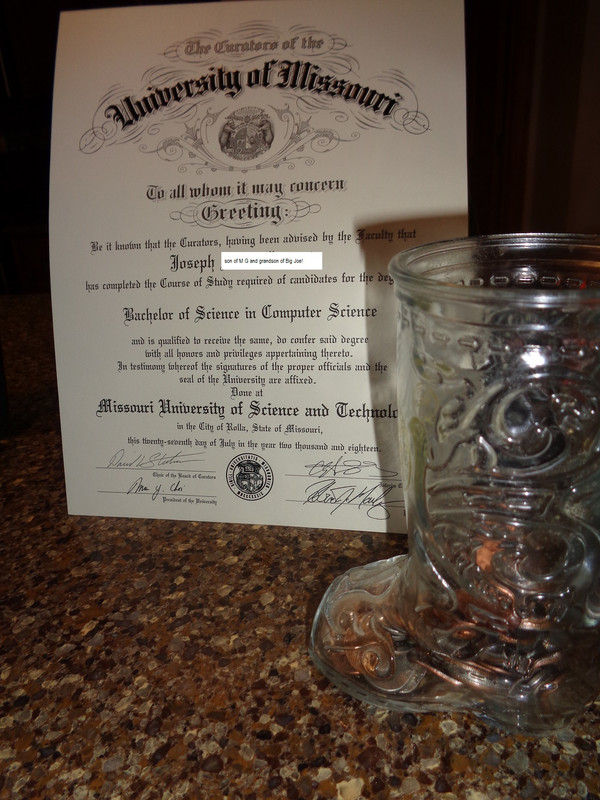 My son, Joey, owned stock in Johnson and Johnson when he was three.
Well, okay, he did not attend board meetings, but he owned 16 shares of JNJ, which listed (at the time) for $50 on CNN-Headline News’ financial report. He added two shares of The Proctor and Gamble Company to his portfolio around the time he turned three, with me putting away a little stash to buy it. I paid for it all without touching our one-income family budget.

While I was pregnant, I read articles in parenting magazines warning me Joey’s education would cost more money than I thought my husband and I could ever earn. Since I was fairly sure I would see Dick Clark and Ed McMahon only on reruns of old television shows and not with any sweepstakes notification team, I came up with a plan.

The idea developed soon after Joey was born when cards saying “Here’s a little something …” arrived in the mail. All of the little somethings went into a savings account that I guarded like a million bucks. With one eye on Joey’s $65, I plotted for more.

I never thought big, just a lot. Thinking was about all I could do while I was suffering the sleep deprivation a newborn brings. I thought about places where my hands touched money.

Coupons. I clipped coupons religiously from the Sunday newspaper inserts and magazines. I never cut coupons for products I did not use, but I clipped all coupons for items I bought often. No amount was too small. Grocery day came — too soon for a new mother opening the cupboard door one morning to discover that God only sent the baby, not the supplies. I picked up my coupons, packed Joey in the mandatory car seat, and drove to the store.

At the checkout counter, I asked that the groceries be totaled before subtracting the coupons. I wrote a check for the pre-coupon total and deposited the change into The Account. All $12.35. One store I shop at requires coupons be placed on items purchased, so I ask nicely if they can be set aside until the end. One checker tried to give me trouble about store policy, but after I threatened to leave the groceries for her to put away, she laughed and gave in. Who was paying for the groceries, anyway? I had  a child to educate with coupon money.

I kept a record the first year, but it became fine science. I stopped keeping the money saved by coupons separate, just  depositing the amount into The Account, like a pro. Keeping the money separate that first year taught me the ritual. Watching the coupon money grow into $234 taught me discipline.

Gifts. This one is tricky, because I am not sure there is a tactful way to ask for monetary gifts. I mentioned the college fund to our immediate family, suggesting $10 or $20 would be as meaningful to Joey as toys. My mother-in-law loved it, but everyone else continued to send toys. I didn’t mind, because in addition to $50 from the Mother Grooch, Joey got new toys to toss around for a while before I cashed them in.

Thrift Shops/Consignment Stores. All that great stuff from the baby shower was so cute and I sold it as Joey grew. The car seat, high chair, and baby swing brought $20 each at the thrift shop. His pajamas and sleepers sold for $2 apiece. Those cute little sweatsuits and overalls I had his photographs made in added $5 per set. I sold most of his toys as he outgrew them. I made two trips to the thrift shop the first year. After subtracting the 20 percent consignment fee, I deposited $85.

Rebates/Price Refunds. When my son was two, I got into the rebate business. I liked the irony of getting rebates from The Proctor and Gamble Company almost as much as I liked the fact that Joey only wore training pants at night by then. I sent off rebate offers for tampons, deodorants, a variety of laundry detergents — my product loyalty lasted only until I saw a better rebate.

I didn’t put it off. When I returned from the store, I cut off the UPC code, circled the price on the receipt, and mailed the offer. I sent in photocopied receipts to get rebates from more than one product at a time. The checks trickled in and you know where they went.

As Joey approached his first birthday, The Account approached $500. I knew the money should be invested. But where?

Nick and I wasted an afternoon at an investment counselor’s office, where I paced stroller tracks on pile carpet as Nick refused to sign anything. I had not seen so many charts and graphs since the Presidential election when Ross Perot and everyone were talking about balancing the federal budget. The charts seemed to prove we could be millionaires, but hey — if I had $500 a month to commit to a mutual fund for 15 years, would I have been rolling nickels and clipping coupons?

At the library I found Peter Lynch’s book, Beating the Street*, while Joey found a wad of gum on the bottom bookshelf. I pried information from the pages with the same intensity I pried the gum from that kid’s mouth. And with equal horror.

Price-to-earnings ratios, emerging growth stocks versus capital appreciation stocks, and equity-to-assets comparisons convinced me the former Wall Street billion-dollar-fund manager never had to make eight diapers last till payday. A tip on page 152 gave me all the information I needed:

“If you like the store, chances are you’ll love the stock.”

The advice, given about product research, literally described Lynch’s trips to a local mall to see which stores and products were doing well. He said it gave him ideas about new retailers or products to investigate for potential investment.

I skipped the mall trip and looked around my house at the baby oil, talcum powder, baby wipes, shampoo, and cotton swabs. Applying a liberal interpretation to Lynch’s advice — since he never even mentions JNJ in the entire book — I decided what store I liked.

Nick asked around work and found a friend who sold me one share of his JNJ stock. Two weeks later a letter arrived with the reinvestment plan and deposit slips. I waited five months and decided if the stock value of a 110-year-old company making everything from baby products to birth-control pills plummeted to nothing, I would have bigger financial worries than sending Joey to college. I sent $300 and waited. After three weeks of not hearing anything, I got a little panicky, but felt foolish when a notice explained JNJ reinvests only one day each month. The letter confirmed ownership of 4.123 shares on Feb. 7, 1996. Joey, who was busy climbing onto and jumping off the coffee table onto pillows strewn around the floor, was a corporate player.

I sent $375 in June 1996, which gave Joey 8.337 shares at 89 7/16 — stocks listed in odd fractional amounts because of some reason I was not interested in. That summer, a letter arrived saying the stock had split. We knew that was good, since share price halved and total shares owned doubled. The total DRIP value was 14 percent higher than it when I’d bought it, so I felt it was going well. I rarely paid attention to stock market prices because I usually had important things to do — like digging coins from pockets as I did laundry and clipping coupons.

That summer the inevitable happened. I was forced to dip into The Account for car repairs. I struggled against it, but finally admitted that it would not make sense to invest money for college if we could not buy groceries. I asked Joey if we could use $200 of his money.

I sent $250 off to The Proctor and Gamble Company not too long after that. I spied their toll-free number on a package of diapers while sending in a rebate offer. I called to ask if they had a dividend reinvestment program. They not only had a DRIP– as we savvy portfolio managers called them — they had a direct stock purchase plan with a $250 minimum initial investment. That way I avoided paying a broker for doing nothing, and also avoided the hassle of ferreting out a rich friend with a share of P&G to sell.

Of course, I cleared it with Joey first to make sure he was ready to diversify.

“Wheels on bus go ’round and ’round, Mommy.”

Joey was eager to see how much his first shares of P&G cost. I heard there were  mutual funds that would take as little as $250 initial investment. If I’d found one which would have accommodated my haphazard investment strategy, I might have had a few yard sales.

I asked Joey how he wanted to vote his shareholder ballot when it arrived.

You bet, baby. As high as I can lift you.

* Beating the Street is probably out of print and obsolete.  I’m sure you savvy investors can figure out a better way to invest.

Post Script:  From the image, you can see my son graduated from Missouri S&T a year ago, but the diploma is MINE. I think I earned it, don’t you? And yes, indeed, that really IS Das Boot and we also purchased and built a log home the same way.  Now?  I’m saving for a trip to Alaska.  I’m taking a little pelt to visit the site of an AWACS crash up there.

Post Script to Post Script: This was the first article I ever sold.  I framed the check for $150 and hung it on the wall.  For a day or so, then I decided that was silly.  I made a copy of it and deposited the money where it needed to be… The Account.  Duh.