Michael Bloomberg just announced he’s running for President by spending over $31M in TV ads in a single week. That tops the previous record set by President Obama in 2012. Bloomberg already made headlines spending $100M on an anti-Trump ad campaign, making it seem like 2020 is poised to shatter previous campaign finance records. But just how much money does it take to win the White House? 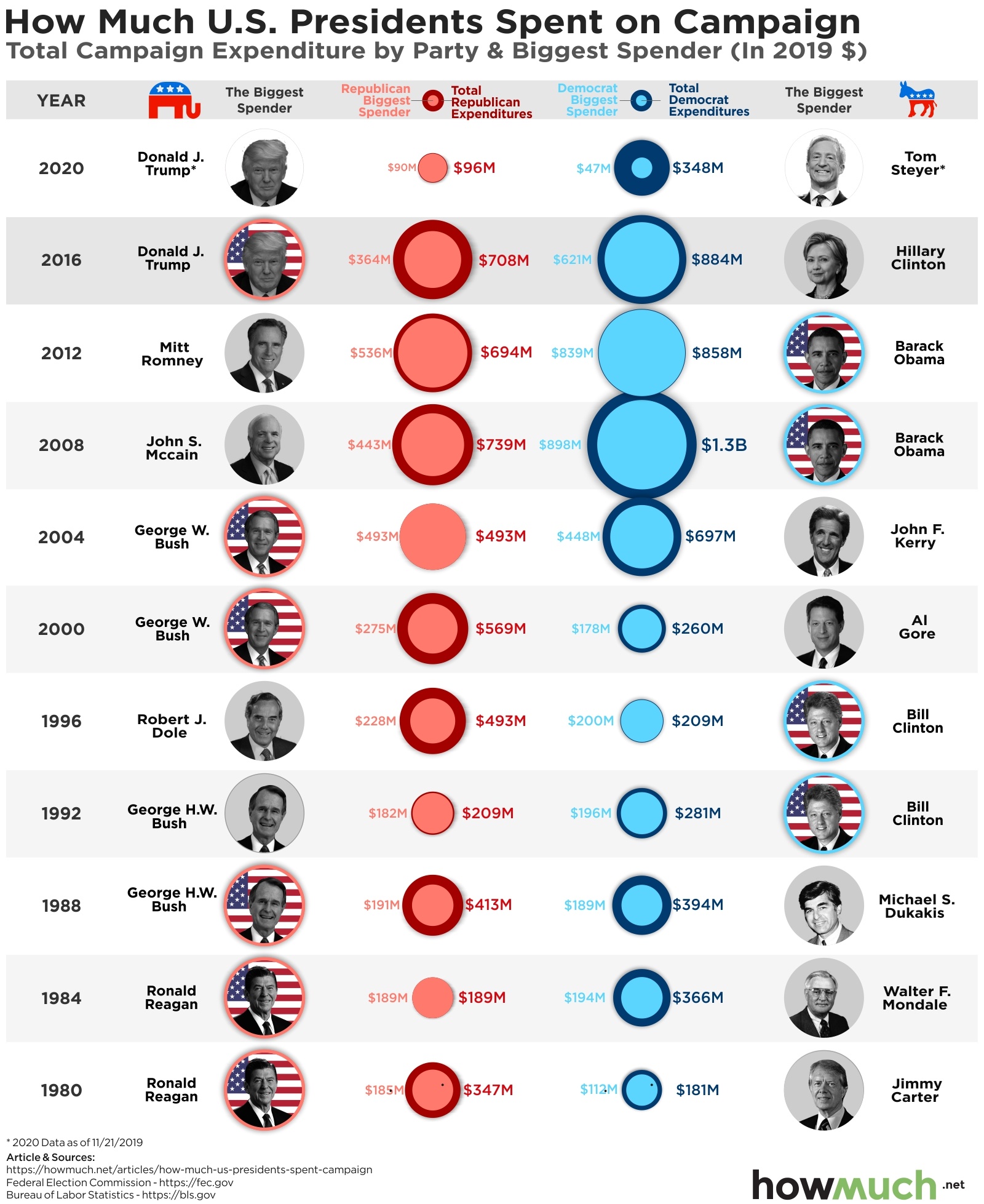 We crunched the numbers for each presidential election going back to 1980 for Republicans (red) and Democrats (blue). The inner circle represents how much money the biggest spender in a given party spent to win the primary and general election. The outside circle represents the candidate’s and party’s total outlay for the entire election. We adjusted the numbers for inflation to represent 2019 dollars, making a true apples-to-apples comparison.

READ  Alert: They Are Going To Try To Ban Donald Trump From Running For President For The Rest Of His Life

Top 5 Most Expensive Presidential Campaigns of All Time

Top 5 Candidates Who’ve Spent the Most

There are a couple caveats to keep in mind when thinking about the underlying numbers behind our visual. For starters, it’s very difficult to track campaign expenditures across time. Changes in the numbers might actually be due to different campaign finance disclosure requirements. For example, thanks to the Citizens United decision in 2010, politicians can rely on outside groups called Super PACs to run advertisements, even if they technically aren’t supposed to “coordinate” with each other. Campaign operations have also changed significantly over the last few decades, evolving from a focus exclusively on TV and radio to robust online advertisements.

That being said, campaigns are definitely becoming more expensive. No political party surpassed $400B before the 2000 campaign. Nowadays, campaigns from both parties spend roughly 5 times as much money running presidential campaigns than they did in the 1980s. No single race tops 2008, however, where the Democrats shattered all previous campaign finance records and dropped $1.3B.

READ  When asked if President Biden has anything to say about the recent riots in the PNW, Psaki said she has not spoken with him about it and their national security team is "closely monitoring" the situation.

Another interesting fact about our visual is how spending lots of money isn’t necessarily correlated with ultimately winning. Democrats spent more money than Republicans but lost in 1984 and 2016. Republicans spent more than Democrats and lost in 1996. Even still, Democratic presidential fundraising numbers pulled ahead of Republicans starting with Obama’s 2008 campaign, a trend which will hold steady if current trends continue in 2020. The visualization also demonstrates how when a U.S. President runs for reelection, almost all his party’s money goes towards his campaign. It’s rare to contest a primary for a sitting President. Just ask Mark Sanford.

It’s worth wondering if these numbers are actually anything to worry about. Is a billion dollars really that much money when it comes to deciding who should be President? To keep things in perspective, Americans spent over $1.8B on peanut butter in 2017 alone. Picking a President seems much more serious and rather inexpensive by comparison, even if Trump decides to advertise during the Super Bowl.

Back to Mike Bloomberg. With a net worth of more than $53B, he’s significantly richer than President Trump. Provided that Trump survives impeachment and Bloomberg secures the Democratic nomination, prepare for another record-shattering election season.

Do you think money is bad for politics? How high can campaign expenditures go before they start to become a problem? Let us know in the comments.