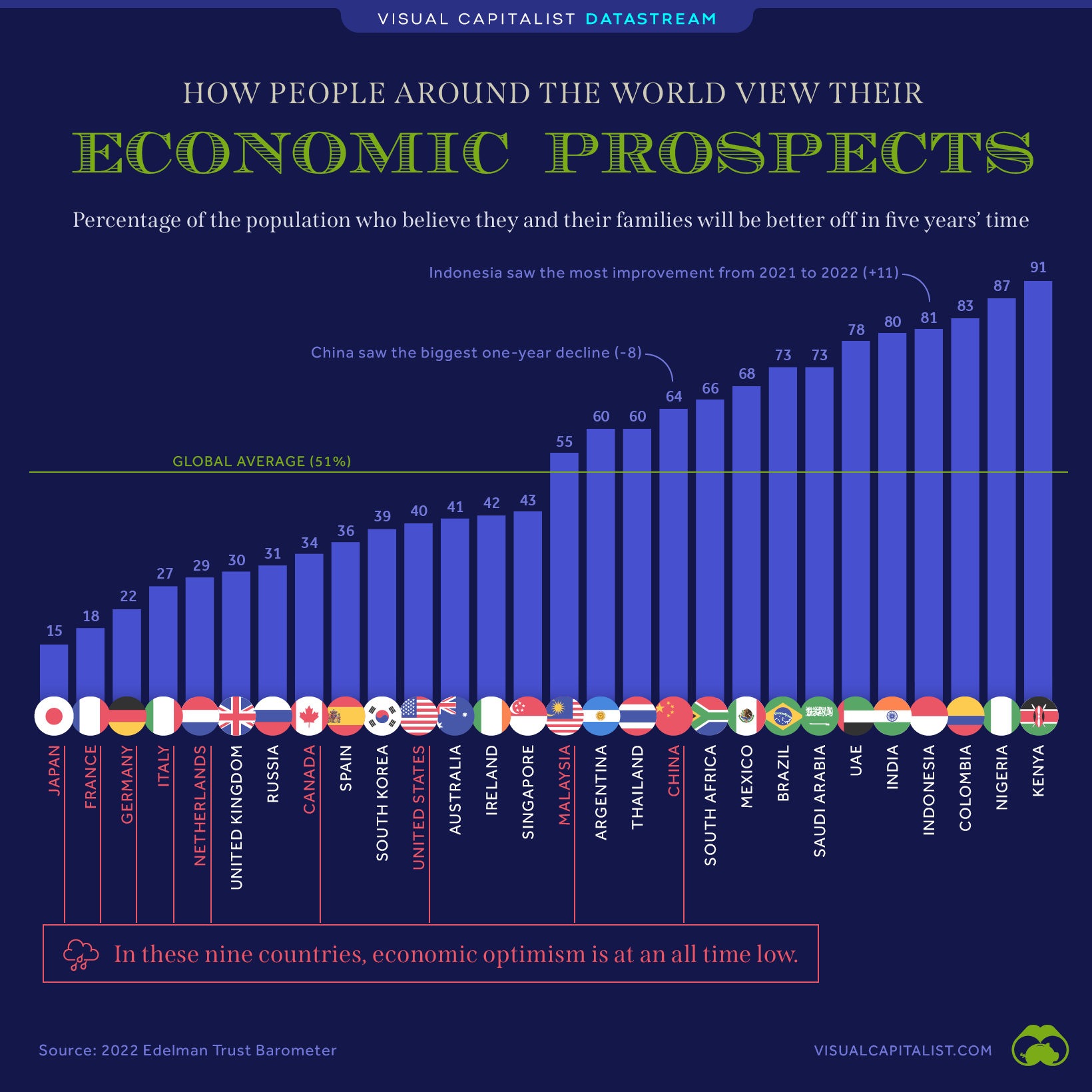 Each year, the Edelman Trust Barometer report helps gauge the level of trust people place in various systems of power.

The report is also a useful tool to gauge the general mood in countries around the world—and when it comes to how people in developed economies feel about the near future, there’s a very clear answer: pessimistic. In fact, optimism about respondents’ economic prospects fell in the majority of countries surveyed.

Here’s a full look how many respondents in 28 countries feel they and their families will be doing better over the next five years. Or, put more simply, what percentage of people are optimistic about their economic circumstances?

Showing 1 to 10 of 29 entries
PreviousNext

Interestingly, nine countries (those with checkmarks above) are polling at all-time lows for economic optimism in survey history.

Whose Glass is Half Empty?

While most developed economies were slightly more optimistic than Japan and France, all are still well below the global average.

As tensions between China and the U.S. continue to heat up in 2022, there is one thing that can unite citizens in the two countries—a general feeling that economic prospects are souring. As the U.S. heads into midterm elections and China’s 20th National Party Congress takes place, leaders in both countries will surely have the economy on their minds.

Whose Glass is Half Full?

Of course, the mood isn’t all doom and gloom everywhere. The United Arab Emirates saw a 6 percentage point (p.p.) jump in their population’s economic prospects.

Indonesia saw an 11 p.p. increase, and in big developing economies like Brazil and India, the general level of optimism is still quite high.

In some ways, it’s no surprise that people in developing economies are more optimistic about their economic prospects. Living standards are generally rising in many of these countries, and more opportunities open up as the economy grows. Even in the most pessimistic African country surveyed, South Africa, the majority of people still see improving circumstances in their near future. In Kenya and Nigeria, an overwhelming majority are optimistic.

One major prediction that experts agreed on for the year ahead is that economic outcomes will begin to diverge between countries with differing levels of vaccine access.

While this doesn’t seem to have affected attitudes towards economic optimism yet, it remains to be seen how this will play out as the year progresses.