My friend Dave Rosenberg, who practices independently at Rosenberg Research, notes that when and how to reopen the US economy is a tough call—one that depends on many medical variables.

“If I had to guess, we will be seeing a partial reopening in some areas beginning in May. I sense the one metric that is really important here is healthcare capacity (hospital beds, ICUs, ventilators).”

I believe easing the business and movement restrictions will depend highly on local conditions. The viral outbreaks spread in ways we don’t fully understand. Keeping so many people out of circulation seems to have helped, but these closures aren’t sustainable indefinitely.

Top priority goes to keeping the healthcare system ready for the worst; Dave and I agree on that. We can’t allow more of these “overwhelm” situations like Italy and New York.

Rather, we need facilities, equipment, supplies, and staff available to treat a (still-high) number of coronavirus patients … plus all the other medical needs that have been sidelined.

Some have suggested we just isolate the most vulnerable people: those over age 60, and/or with immune system, lung or other problems. That would probably help, but wouldn’t be simple.

You’re still talking about a big part of the population, plus the younger caregivers who would come in contact with them, plus the caregivers’ families. That’s not sustainable for long, either.

Dr. Michael Roizen of the Cleveland Clinic is helping prepare a paper for Ohio and other states about how to think about reopening their states. He includes this chart about death rates in Ohio; clearly the risk of death rises dramatically with age. 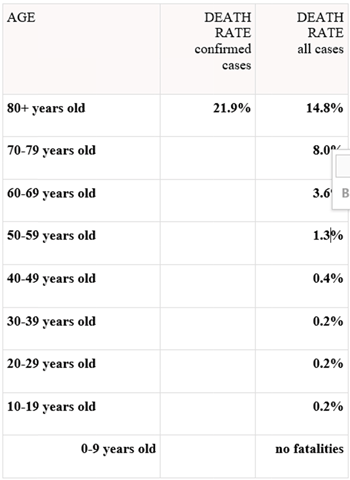 But that changes if you factor in other health issues. High blood pressure, smoking, being overweight, lack of exercise, all contribute to increased morbidity. So you can be younger and still be in a high-risk category because of your health.

The US still needs to sharply ramp up testing before we can ease the restrictions.It is getting better, and some private labs even report excess capacity now that they’ve worked through the initial backlog. But we need much more to be confident, probably millions of tests a day.

We just have to bite the bullet and make it happen.

With the caveat that local schedules will vary, I think Dave is right that we can begin reopening in May. But note how carefully Dave said it (my emphasis):

“A partial reopening in some areas beginning in May.”

We are not all going to emerge from our holes, blink at the sunlight, and proceed merrily into spring. I expect a drawn-out process, possibly interrupted in some places if new cases begin growing again.

Some governors are talking about allowing restaurants to open at 50% capacity. How’s that going to work for their cash flow? Not to mention jobs?

Governments can’t simply order the economy reopened. Consumers and businesses have to agree, and all will make their own choices. Like everything else, it will be a cost-benefit analysis.

In the nearer term, it’s going to look quite different. Masks will be mandatory some places and socially expected in others. Most people will stay close to home. Even if you’re willing to get on a plane or train, you’ll risk being caught in someone else’s outbreak and unable to get home.

Is the benefit of going to that restaurant worth the risks of going out in public, in proximity to possibly infected strangers? Maybe so, but fewer will want to as long as this virus is still a threat.

Life will be nothing like the “normal” we knew just a few months ago until we have an effective vaccine and most people are inoculated. That’s at least eight months away, maybe longer.

We aren’t going to just pick up where we left off. Social distancing is incompatiblewith the kind of economy we have always known.

As long as it persists, the old economy is gone.