So looking at this from a volatility perspective, short volatility has been profitable for many years because realized vol is usually lower than implied vol until a black swan event which is the coronavirus. So MM and hedge funds have been shorting volatility for years until this crisis fucked them all up. Realized vol shot up with the increase in IV in the first 3 weeks of the crash. Many got margin called so they had to liquidate everything which added to the crash.

But since then, VIX has been suppressed for the past few weeks while realized vol continued to go up. 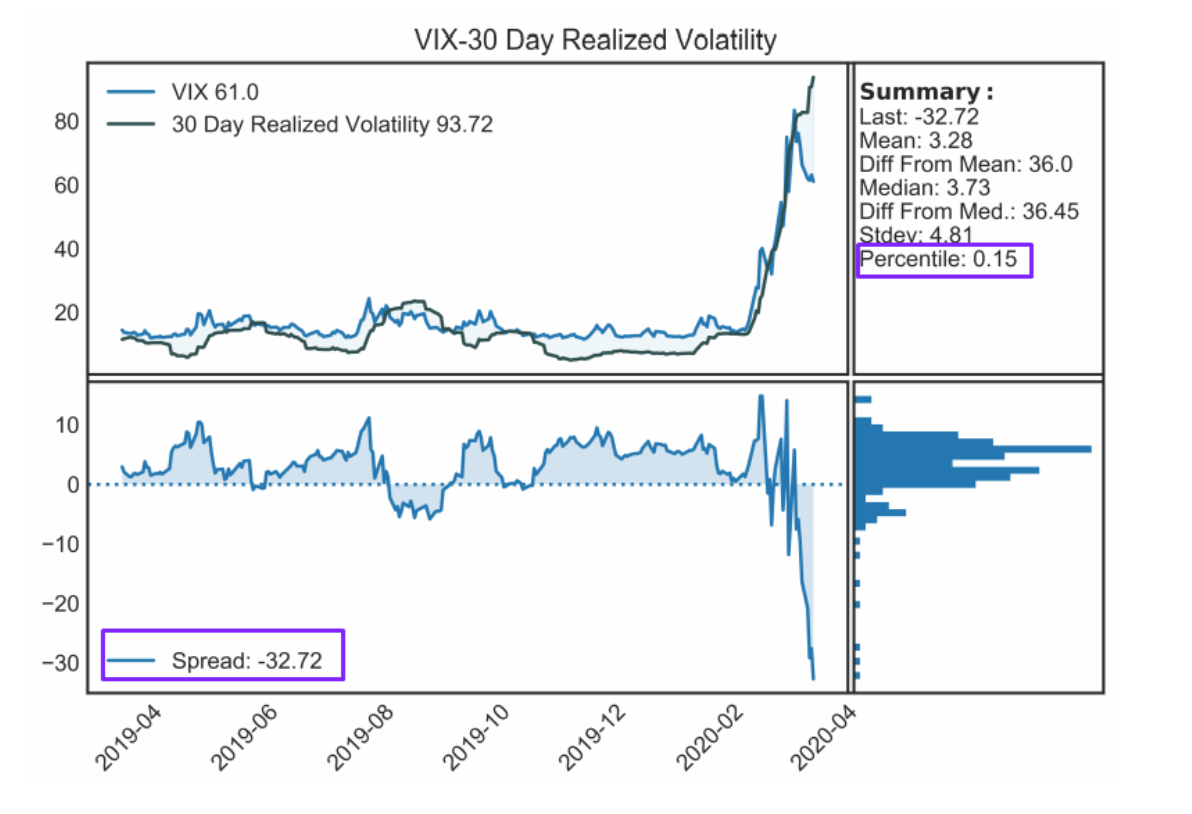 Looking at the graph the spread between realized volatility and VIX is now beyond 30, I suspect the number is even higher now given that the market remains to be volatile while VIX drops further. This puts us at .15 percentile of previous spread, the last time in 2008. Every time in history, when the spread between real and implied volatility is that high, there must be a process of reconciliation. 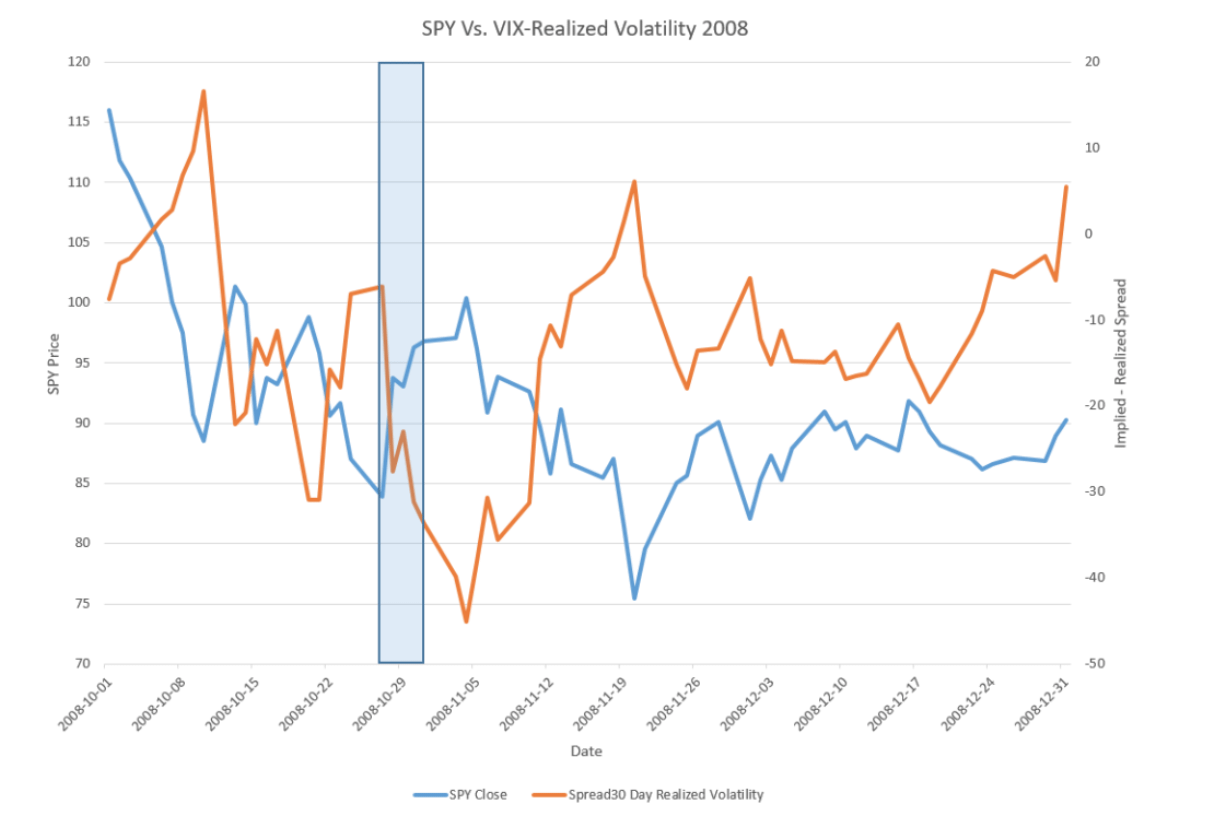 What’s happening right now indicates that MM and hedgefunds are probably getting back into the short vol trade, knowing that the FED have their back, and betting on the blind optimism right now. They are massively writing off risk. But given the current economy, I believe this is insanely stupid, and would exacerbate the volatility once the real downfall comes.

So then comes the reconciliation between IV and real vol.

There are only two ways:

If the real downfall comes, then VIX would naturally bounce up to catch up.

Looking at this chart, if no. 1 really occurs, then we are looking at an all time high of VIX maybe even at 100s. 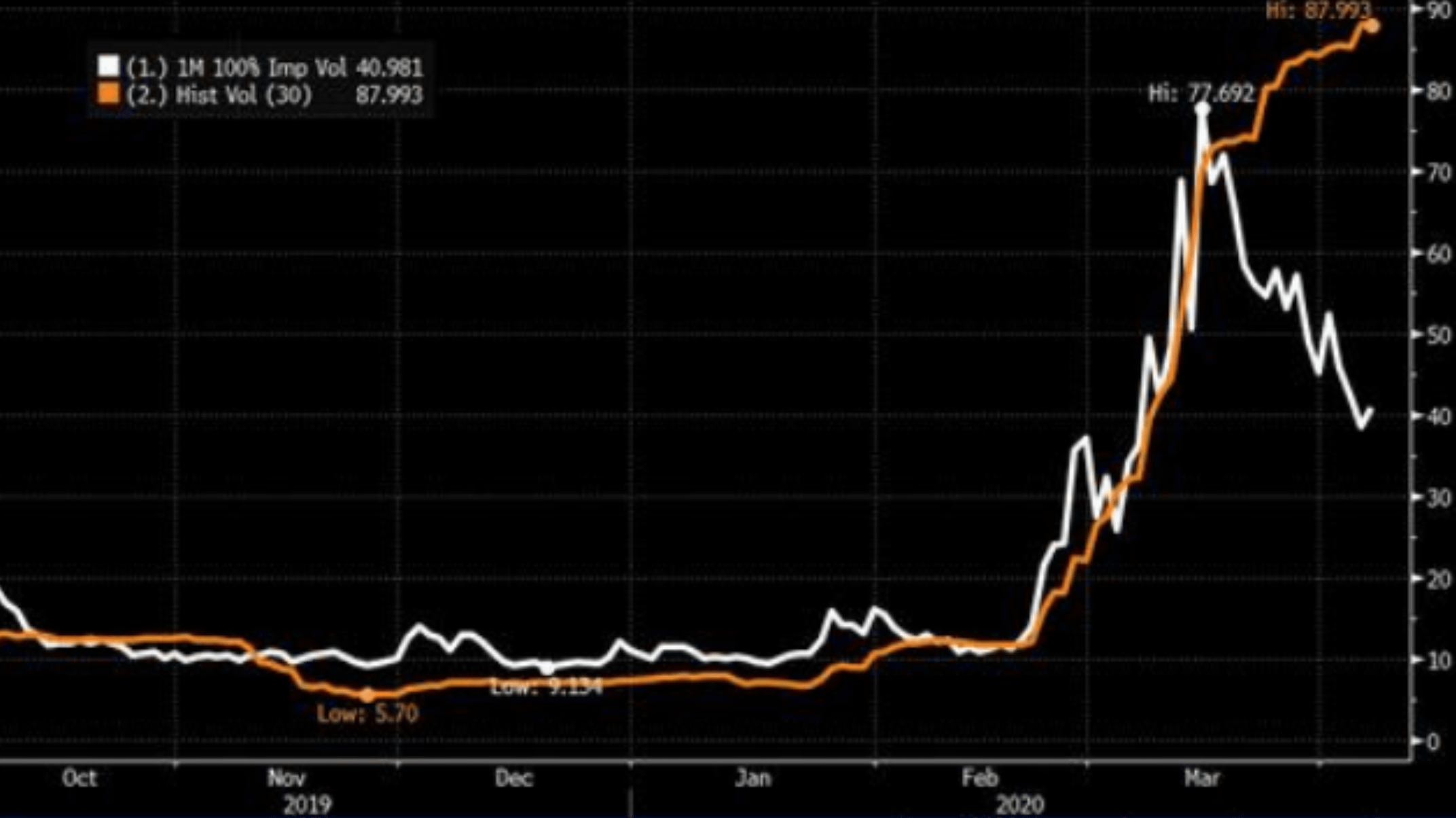 So if this happens, then either we settle in the current range as volatility dies down in 1 month or we continue to go up but at a slower pace. If we continue going up at the current pace, the spread would still continue to widen. So for option 2 to happen, pace is crucial, the market would really have to slow down quite significantly for a long period (As real vol is 30days backward looking). But given the current externality and the active FED action, I believe this is less likely.

So say IV will increase and we will have a massive leg down. What is the timeframe. Personally I think what we really lack is a strong catalyst. I started shorting SPY on 1/2/2020 when the news of COVID-19 first got out. The market didn’t react at that time because it was still in a phase of blind optimism so we saw the market continue to rally even on negative news (Although vol was lower at that time). Once Europe got hit, the market collapsed.

Now after the initial drop, I believe we are at the phase of blind optimism again. Market rallies on very negative news. But this time what’s different is the FED, after printing so much money, I don’t really know when will they stop or will they ever stop. So the timeframe and the catalyst here is crucial, but this is largely unknown I believe.

Technically, we are now at the Fib 50% retracement, which surprisingly held last night even after positive news from OPEC and the FED 2T program, indicating bulls might be running out of steam. At one point we even saw SPY down to 275. In terms of volume, It is drying up as well

Looking at 60min graph, I see that we are at wave C of Elliott wave of the greater fractal, which so happens to coincide with 50% fib retracement. Volume has also markedly dropped in wave C. In fact we have the lowest volume now since ATH. We are also at the top of the BB. 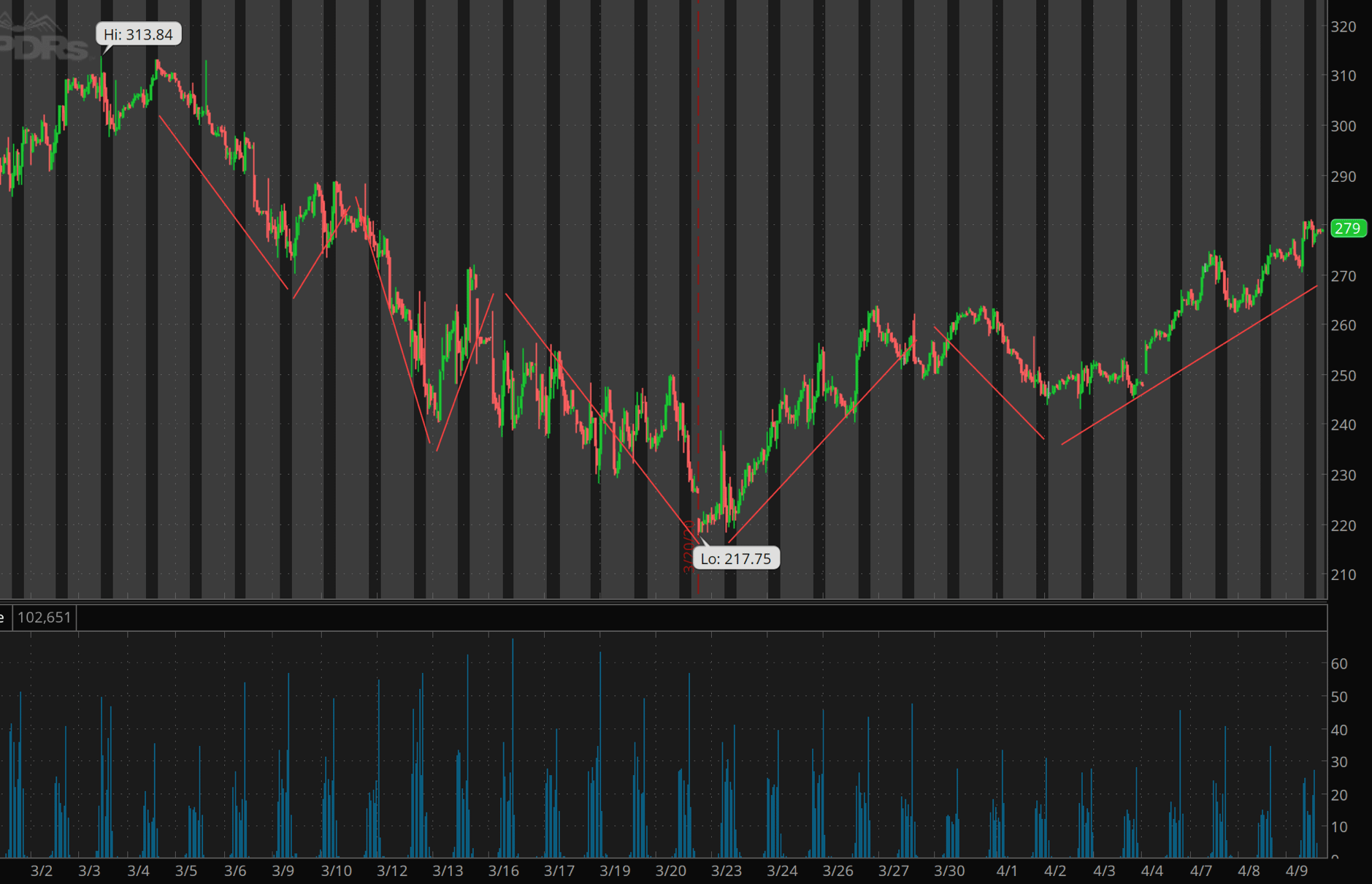 60min Looking at weekly (The greater fractal), we are now nearly completion of Wave 2, the decrease in volume is quite apparent here. Fundamentally this indicates a lack of conviction. 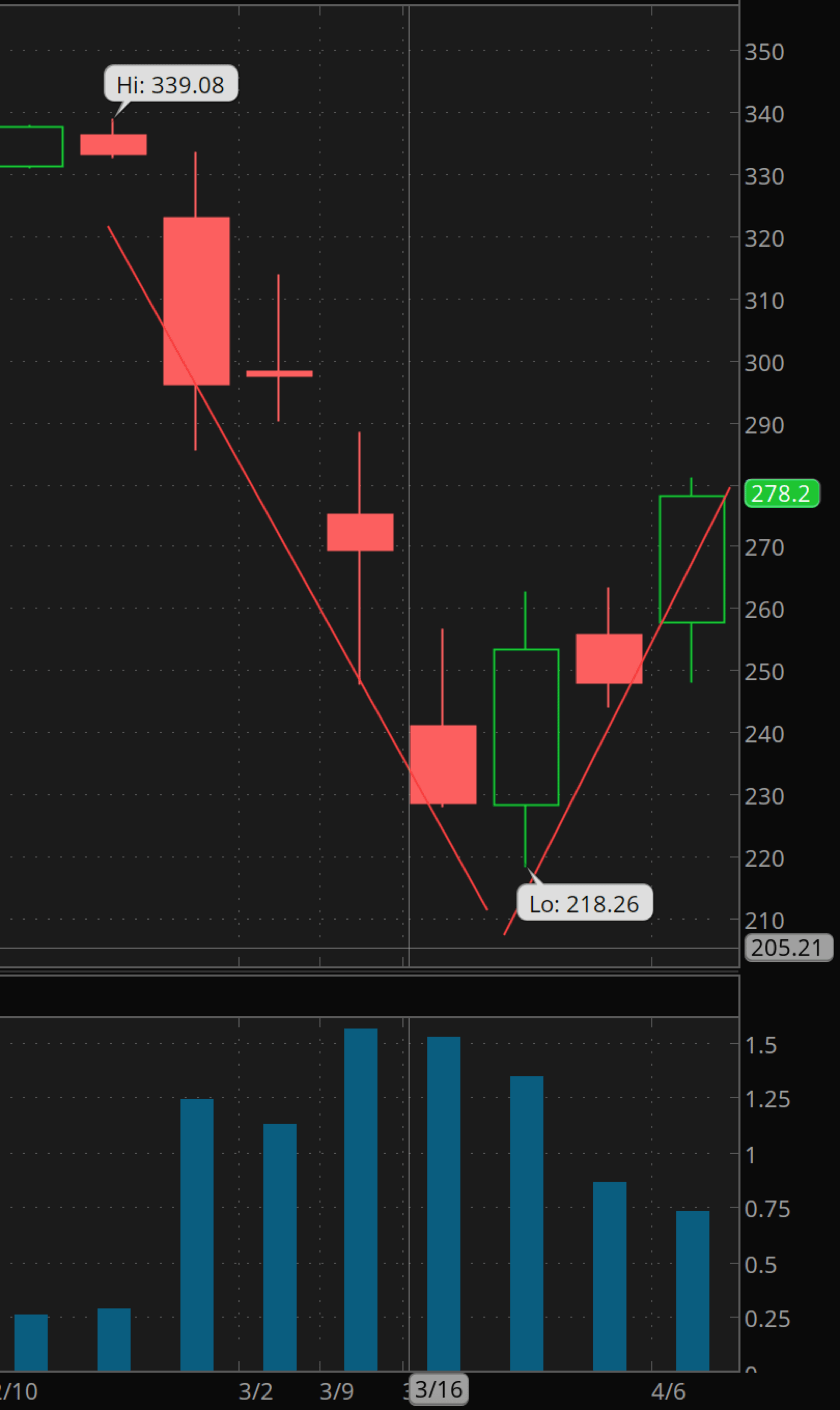 Strategically, I do see more upside to 278, given the lack of catalyst right now. We are shifting to earning season now and China is opening up. Potential catalyst can be very poor earnings or projection, second wave of infection in China etc. Near term I see 278 – 290 to be potential trading range. Next week would be quite heavily contested. I see a sell off early next week from being overbought this week and contest between bull and bear to bring the price to 278-290 range with sell off again EOW. This might give us a confirmation Doji for the leg down. Alternatively, we might get a sell off early next week then trade within 265 -275 range which also gives us a reversal pattern. Volume would be crucial here. But one caveat would be the FED, since FED is literally buying up everything, natural price movement can be heavily skewed, so It is possible that everything can be delayed. Price discovery has been killed by the FED. Given the uncertainty, I am now hedging my puts with 290 call. I entered too early with 515 200P and am now sustaining heavy loss. Will look to roll the 515 200P to something more realistic once theres exit point. But will save most of my powder after next week plays out. Next week might be the most important trading week of the year.