The electrification of most industrialized societies has taken off in a big way. In the EU and China government support such as regulations and subsidies are pushing automakers towards alternative technologies which don’t utilize fossil fuels as a source of energy. Also, in North America, despite Trump’s support for the fossil fuel industry, carmakers are embarking on the path of electrification with Elon Musk’s Tesla being one of the frontrunners. Virtually all big auto brands have several EV models planned for the coming years. Hydrogen, however, is not part of the hype.

The smallest and most abundant particle in the Universe has been branded as an alternative environmentally friendly technology compared to EVs. Hydrogen has several pros and cons regarding its application for transportation and energy storage purposes. However, the technology behind fuel cells, the technology used to power hydrogen cars, has failed to convince the wider public and consumers due to a simple reason: high costs.

Hydrogen, or H2 as it’s called in the world of science, can be produced by an environmentally friendly method called ‘hydrolysis’ or through the process of ‘reforming’ natural gas, which is the approach to produce 95 percent of the hydrogen on the market. A reason for hydrolysis’ low applicability is the massive amount of water required for its production. A fuel cell vehicle, FCV, requires 13 gallons of water for each mile. In general, the reforming of natural gas by creating a reaction with carbon dioxide under high-temperature steam is the cheapest and most efficient method.

A common mistake about hydrogen is that it’s an energy source instead of an energy carrier. The latter requires an external source of energy to ‘split’ the H2O molecule, or water, into hydrogen and oxygen. Currently, the process is relatively inefficient leading to higher costs compared to alternatives such as EVs.

At the moment, only Toyota, Hyundai and Honda offer an FCV which has a higher price tag than other vehicles of comparable size and capabilities. In the U.S., on average, a fuel cell vehicle costs $60,000 which is more than EV models. The necessity of expensive metals including platinum, titanium and carbon fibers to produce the fuel cell and the hydrogen storage systems means higher prices. Also, the FCV currently offered on the market are not mass-produced. It means that significant cost reductions are possible in time if the necessary resources are invested in further research.Related: Goldman: Brent Oil To Reach $70-$75 Soon

Inefficiency and high costs of hydrogen production are downsides of FCV. Hydrogen costs €10 for each kilogram in the EU and $14 in the U.S. which is sufficient for 100 kilometers or 62 miles. In contrast, EVs are much more efficient with ‘merely’ 31 percent loss of energy. In the case of FCV, the conversion, electrolysis and the converting of hydrogen into electricity requires a significant amount of energy which affects its efficiency. 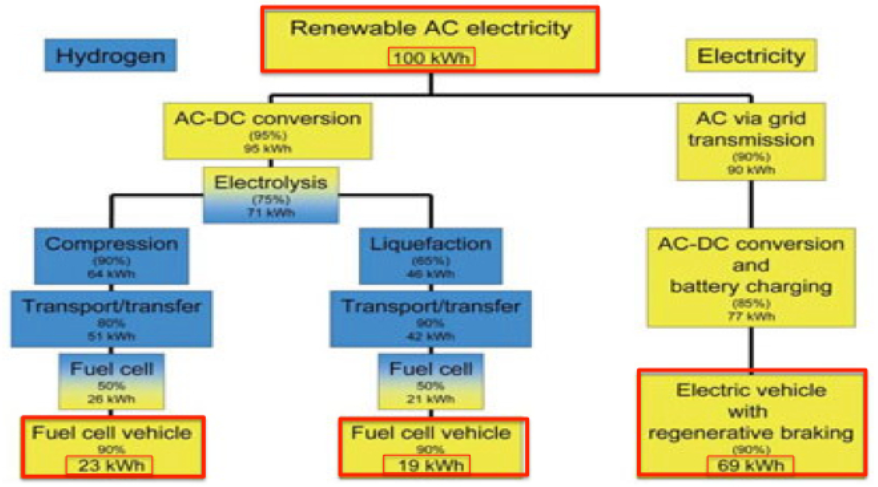 Hydrogen-based technology has several methods of conversion and storage which affects the costs and efficiency of FCV.

Hydrogen can power a vehicle using an adjusted internal combustion engine or through a fuel cell. Also, the storage of hydrogen in either liquefied or compressed form affects the fuel’s efficiency (see below).

Furthermore, FCVs require an additional infrastructure to transport hydrogen to consumers. The system would resemble the traditional oil industry such as pipelines, storages, and refueling stations. EVs, however, require a far lower investment in transportation infrastructure due to the already existing electricity grid. Although the expansion of capacity could be needed, EVs have the added value that they can be used as batteries for smart grid appliances.

The technology behind EVs is ripe to be used on a massive scale which has led to an impressive increase in sales with practically all significant automakers entering the market. However, the mass production of batteries could be a risk due to resource scarcity. FCVs don’t share the same issues, but instead, other challenges need to be overcome.

In the first place, the costs for producing hydrogen-powered vehicles need to decrease through mass-production and the substitution of expensive metals. Also, improving the efficiency of hydrogen production through environmentally friendly methods would strengthen the position of FCVs as an alternative to fossil fuel-based cars. The growing use of renewables and a promise by Japanese automakers to reduce costs could be the catalysts to propel FCVs as a competitor of EVs.