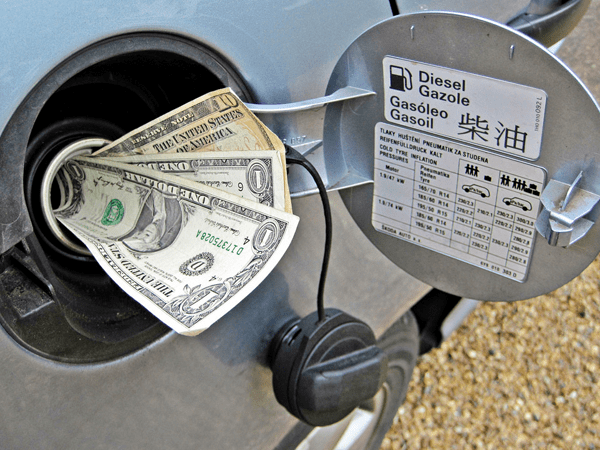 In April of 1980 inflation peaked at a staggering 14.76%. That same year, the Fed triggered a rise in interest rates to near 20% around the same time, employing the controversial “Volcker Rule.”

If by “interest rates” you mean the rate set by the Fed — the Fed funds rate — it rose to TWENTY PERCENT in 1980. But no, it was not inaction but just the opposite: a deliberate rise in rates triggered by inflation.

And as you can see in the chart below, the 1980s also represented the 3rd highest average inflation percentage in a decade since 1913: 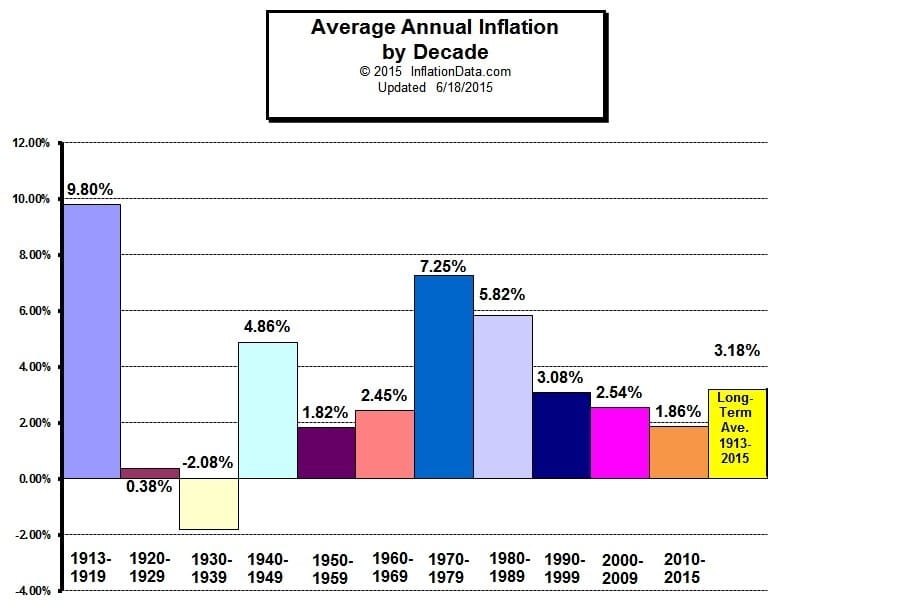 So inflation rose dramatically, and the Fed employed a dramatic strategy, hiking rates through the roof.

But as you look at the same chart, it’s also clear three other decades had severe inflationary periods as well. Each time that happens in the U.S. the dollar loses buying power quickly as prices for food, energy, and fuel go through the roof.

Serious hyperinflation can happen relatively quickly. Venezuela is a recent example, where it only took about 5 yearsfor the local bolivar to lose 90% of its value. Inflation soared to a ridiculous 1.37 million percent.

We also have historic examples of severe hyperinflation. From 1921-1923 the Weimar Republic of Germany suffered massive inflation. Sovereign Man highlighted, “a single egg at the market would cost millions of marks” during this economic upheaval.

Zimbabwe also had a period of massive war-based hyperinflation in 2008-09 after printing money and devaluing its currency.

These hyperinflation horror stories beg the question, will the Fed’s “target” of 2-3% inflation per year be effective?

Inflation is currently kept in a target range by the Fed. Right now it sits at about 1.5%, and if you listen to Chairman Powell, it seems like it’s “under control.”

We tend to forget that over the last century, cumulative inflation has risen over 2000% in the U.S., so even inflation “under control” adds up.

That “under control” inflation can quickly change in the U.S. (see chart): 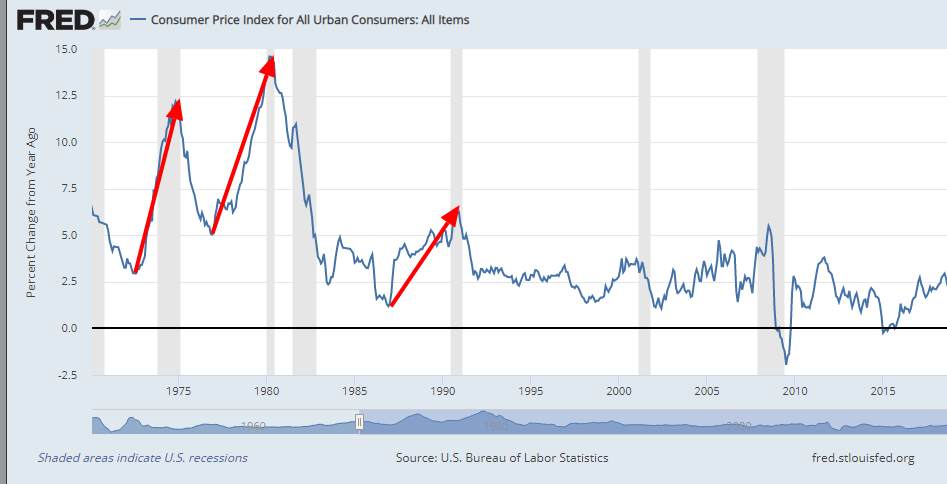 The Weimar Republic of Germany has interesting context from the few people that prospered during hyperinflation. That lesson was highlighted by Sovereign Man (emphasis ours):

Back in Germany’s hyperinflation days, there were a handful of sophisticated people who saw the writing on the wall. They knew that the government could never pay its debts, and that they would print money and debase the currency.

This begs the question … are there people that “know” the U.S. can’t pay its crushing debt? The U.S. has already printed money (QE), and that money has to go somewhere. But Powell has already committed to ending the balance sheet “runoff” in Q3.

READ  Hyperinflation 'wiped out' these great currencies, is the U.S. dollar next? Steve Hanke

It may be a good time to consider being one of those who “saw the writing on the wall.”

What Worked for Hugo Stinnes Could Work for You Too

When German hyperinflation ended, Hugo Stinnes was one of the few that prospered. According to Sovereign Man, this is how (emphasis ours):

Stinnes’ hard assets weren’t affected by the hyperinflation. They held their value. His businesses and investments flourished, making him one of the wealthiest men in the world.

Those “hard assets” included gold, which as history has proven, does well during market turmoil and times of inflation.

If the Fed and other factors trigger the wrong events, serious inflation may happen again. When that happens, you’ll want to be prepared with assets that can protect your wealth.