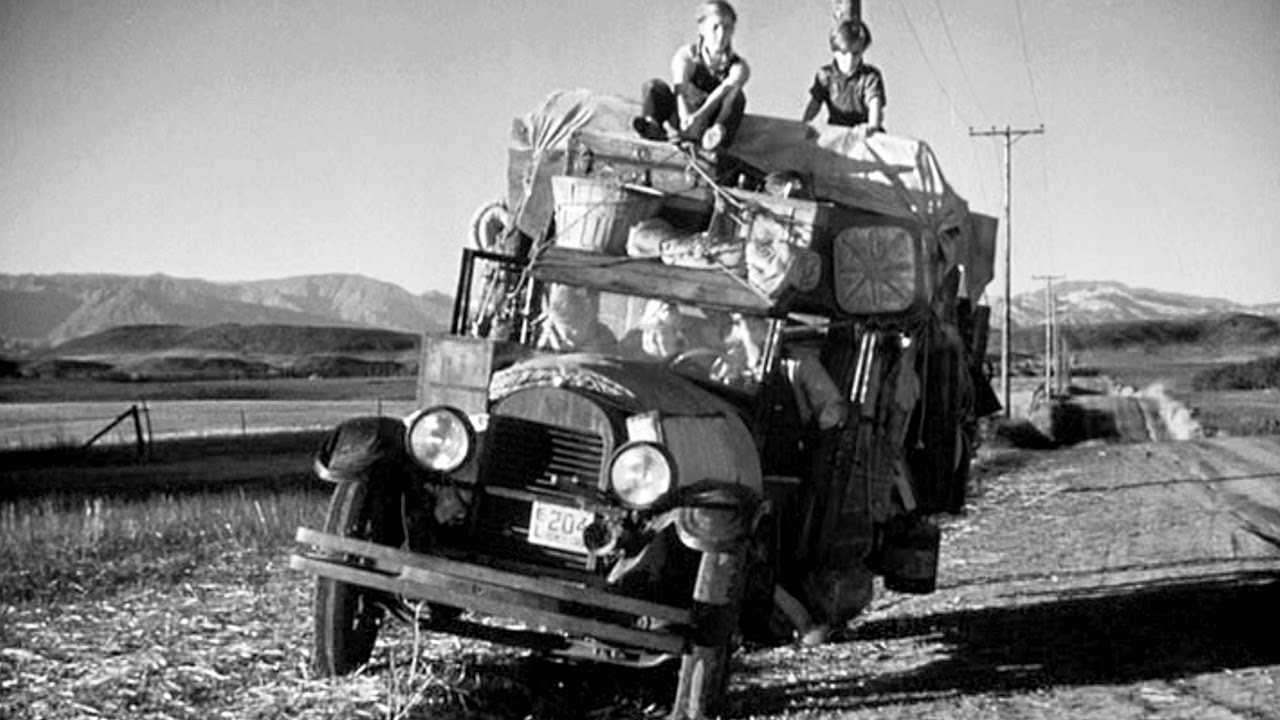 In the 1930’s, the farm population in the US was nearly 25% of the total and it was quite common for farmers to borrow from the bank (using their farms as collateral) in the expectation that the proceeds from their annual crop would pay off the note each year.

But, in 1929, there was a crash in the stock market, lowering the sales price of crops significantly. That, and coincidental droughts throughout the farm belt, resulted in a large percentage of the thirty million farmers failing to meet their payments. They lost their farms.

Worse, they could not turn to another line of work, as layoffs were taking place in all industries, as a result of the Great Depression, which followed the crash.

But it was said that, in California, there was year-round good weather and the orange groves were full of fruit needing to be picked. If only the Okies could get there, they’d be all right.

And, of course, as most Americans know, this ended in a mass migration. Some 7,000 Okies flooded into California every month.

Not surprisingly, Californians found that they had to deal with overwhelming numbers of people with limited skills, all of whom were broke. They were everywhere and, in a very short time, the authorities were called in to keep them out.

Of course, in any situation in which large numbers of starving people are pitted against armed authorities, the situation does not end well.

In looking back at this period, it’s important to remember that, in mid-1929, warnings had been offered that a market crash was in the making and that the US would soon find itself in an economic crisis.

In spite of these warnings, the great majority of people said, “If it happens, I’ll deal with it when the time comes.”

Unfortunately, if people are to escape becoming casualties of an economic crisis, they must make plans and implement them in advance of the crisis.

And so, nearly ninety years later, we find ourselves in a similar situation. A market crash is in the making and the US (and many other countries) will soon find itself in an economic crisis.

And, just as in 1929, the bankers and the media are claiming that the economy has never been healthier and that it’s foolish to worry. (This is being said, even as larger players are quietly exiting the market.)

Increasingly, I’m asked for consultations by people who say, “I understand a crisis is coming, but what can I do about it?”

Well, in fact, the answer is pretty straightforward, but that doesn’t mean it will be painless. Indeed, it requires a major change for most people, often the greatest change of their lifetimes.

Unfortunately, in the great majority of cases in which I’ve described this as a “Crisis Insurance” policy, the individual asking for the advice views the policy as overwhelming. If he’s an American, as many of them are, he often says, “If it gets that bad, I’ll just go to Idaho.”

Unfortunately, this “solution” is flippant and ill-advised. Since we have no crystal ball, our best bet is to turn to history if we’re to gauge the viability of current “solutions.” We may ask ourselves, “How did this play out in previous similar situations?” This almost always forces us to be honest with ourselves – to abandon half-baked or “solutions” and do the harder work of developing a real solution.

In light of the Okie history of the 30’s, it’s safe to say that, if an American were to plan to “just go to Idaho,” this time around, we can anticipate that this is what he would find:

The odds that “I’ll just go to Idaho” might be a workable solution to a crisis, would be unlikely in the extreme.

As stated above, if people are to escape becoming casualties of an economic crisis, they must make plans and implement them in advance of the crisis. Any after-the-fact solution would be a pipe dream.

Editor’s Note:Unfortunately, there’s little any individual can practically do to change the course of these trends in motion.

That’s precisely why bestselling author Doug Casey just released Surviving and Thriving During an Economic Collapse an urgent new PDF report. It explains what could come next and what you can do about it so you don’t become a victim. Click here to download it now.