In my opinion, JPMorgan Chase & Co (JPM) is the most important stock if you are worried about all the crosscurrents facing the global economy.

JPMorgan is the biggest of the “too big to fail” U.S. money center banks and is a component of the Dow Jones Industrial Average. The banking giant has tentacles in so many markets and banking activities around the globe that negative technical warnings for its charts should be considered a warning that a global bear market for stocks is around the corner.

JPMorgan obviously passed the bank stress tests, which can lead to a dividend hike and share buybacks but will not help consumers on Main Street. A lower tax rate may offset the larger regulatory banking fees that are on the way. Dealings with foreign banks under stress could become a major headwind.

Traders had the opportunity to buy JPMorgan on weakness to its 200-day simple moving when it was at $105.24 on May 29 and again over the last five days with the average now at $106.73. If there is a price gap below the 200-day simple moving average beware that the downside is to my annual value level of $93.20.

Investors beware that the weekly chart for JPMorgan is negative and if a bear market is confirmed the downside risk is to the 200-week simple moving average now at $77.33 and rising each week. The last time this technical “reversion to the mean” was tested was during the week of Feb. 12, 2016 when the average was $54.44.

Data from the Federal Deposit Insurance Corporation shows that JPMorgan controls 13.3% of the total assets in the banking system at $2.327 trillion. This puts the bank at the fulcrum of almost every line-item on the FDIC Quarterly Banking Profile for the first quarter of 2018.

The FDIC Quarterly Banking Profile For The First Quarter Of 2018 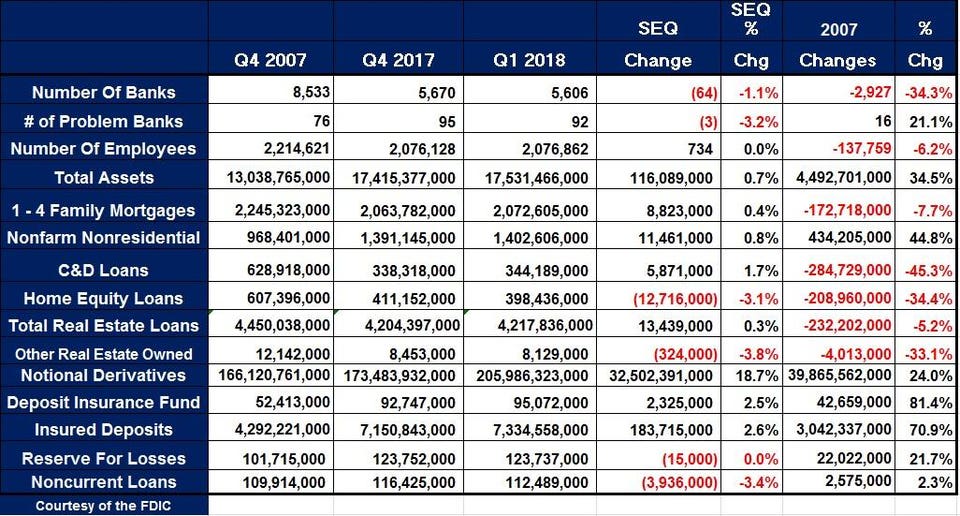 Residential Mortgages (1- to 4-family structures) represent the mortgage loans on the books of our nation’s banks. Production rose to $2.07 trillion in the first quarter. This is 7.7% below the pace at the end of 2007.

Nonfarm / Nonresidential Real Estate Loans represent lending to construction companies to build office buildings, strip malls, apartment buildings and condos. This category of real estate lending expanded to a record $1.403 trillion in the first quarter, up 44.8% from the end of 2007. The banking system thus is at risk that closures of retail stores and malls will lead to loan defaults.

Construction & Development Loans represent loans to community developers and homebuilders to finance planned communities. This was the Achilles Heel for community banks and the reason why more than 500 banks were seized by the FDIC bank failure process since the end of 2007. C&D loans rose to $344.2 billion in the first quarter up 1.7% from the fourth quarter but is 45.3% below the level at the end of 2007.

Home Equity Loans represents second-lien loans to homeowners who borrow against the equity of their homes. Regional banks typically offer HELOCs, but these loans continue to decline quarter over quarter despite the dramatic rise in home prices. HELOC lending declined by another 3.1% in the first quarter to $398.4 billion and is down 34.4% since the end of 2007.

Total Real Estate Loans had a sequential growth rate of just 0.3% in the first quarter to $4.22 trillion down 5.2% since the end of 2007. Real estate lending is supposed to be a driver of economic growth but has been disappointing.

The Softening Of The Volcker Rule Has Its Time Bombs

Notional Amount of Derivatives, where many trading risks reside, rose by a significant 18.7% in the first quarter to a mammoth $206 trillion. This exposure is up by 24% since the end of 2007.

In today’s volatile world, bank regulators have not been able to detect problems before they occur. The New York Federal Reserve could not detect the scams at Wells Fargo (NYSE:WFC) when they vetted the bank and named it a primary dealer on April 18, 2016. Why did they not remove it as additional claims and fines accumulated?

On June 1, S&P downgraded Deutsche Bank (NYSE:DB) to a credit rating of BBB+ from A- on concerns that the global bank will have a difficult time revamping its operations including their U.S. operation, which is a primary dealer. Should the New York Fed remove them from the primary dealer list?

The spike in assets among the 92 banks on the FDIC non-list of problem banks suggests that Deutsche Bank was added to the list in the first quarter.

The loosening of the Volcker Rule makes it more difficult for the New York Fed to monitor their risks. There are 23 primary dealers and they must be market-makers to each other, which puts its firm’s capital at risk. Deutsche Bank is still on the list!

Deposit Insurance Fund represents the dollars available to protect insured deposits. These monies are funded by all FDIC-insured institutions via annual assessments, with the largest banks paying the largest amounts. The first quarter DIF balance is $95.07 billion up from $92.75, billion in the fourth quarter.

Insured Deposits rose to $7.335 trillion in the first quarter and is up 70/9% since the end of 2007 as savers seek the deposit insurance guarantee of $250,000 available at each bank in which a saver has insured deposits.

By the end of September 2020 this fund is mandated to have the fund at 1.35% of insured deposits. The current level is unchanged at 1.30%. If this ratio is not reached by the end of 2018 the largest banks will be assessed to close the gap, and that, of course, includes JPMorgan.

The banking system continues to recover given higher net operating revenue and the lower effective tax rate. However, the current economic expansion is one of the longest in history, which indicates potential risks down the road.

Many banks have been “reaching for yield” by investing in higher-risk, longer-term assets. This makes it important for banks to manage interest rate risk, liquidity risk and credit risk.

I consider the FDIC Quarterly Banking Profile as the balance sheet of the U.S. economy, and in my opinion: the banking system has not fully recovered from the “Great Credit Crunch” that began more than ten years ago. 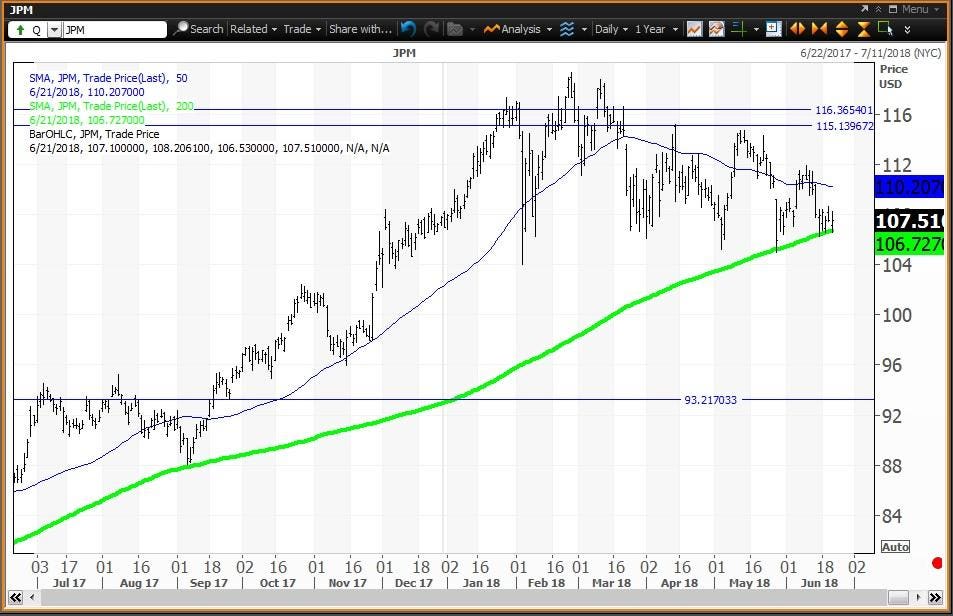 You can see how shares of JPMorgan have been riding the 200-day simple moving average (green line) at $106.73. The downside risk is to my annual value level of $93.20 which is the lowest horizontal line. Above the market I show projected monthly and semiannual risky levels at $115.14 and $116.36, respectively. 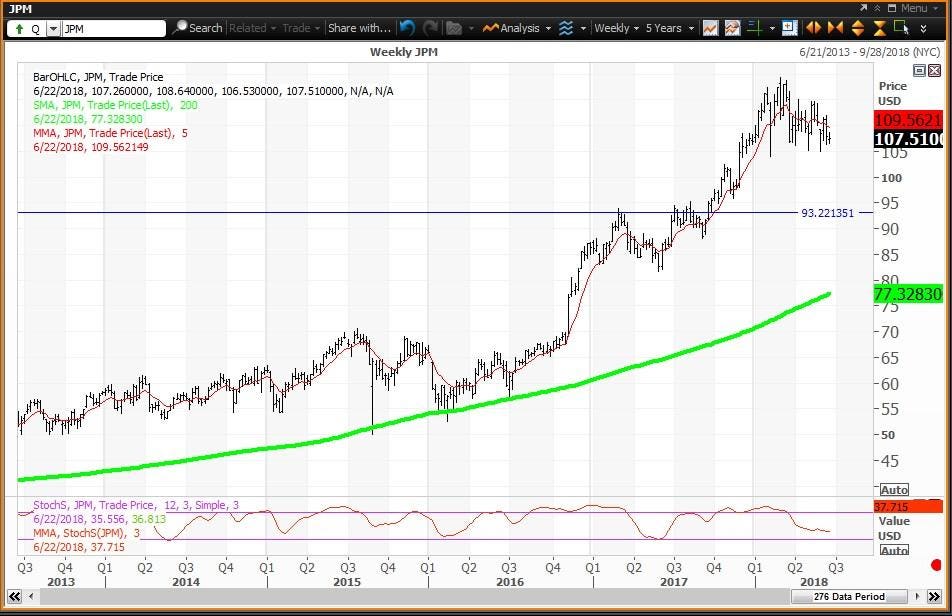 The weekly chart for JPMorgan is negative with the stock below its five-week modified moving average of $109.56. The stock is well above its 200-week simple moving average of $77.33 which is the “reversion to the mean” last tested during the week of Feb. 12, 2016 when the average was $54.44.