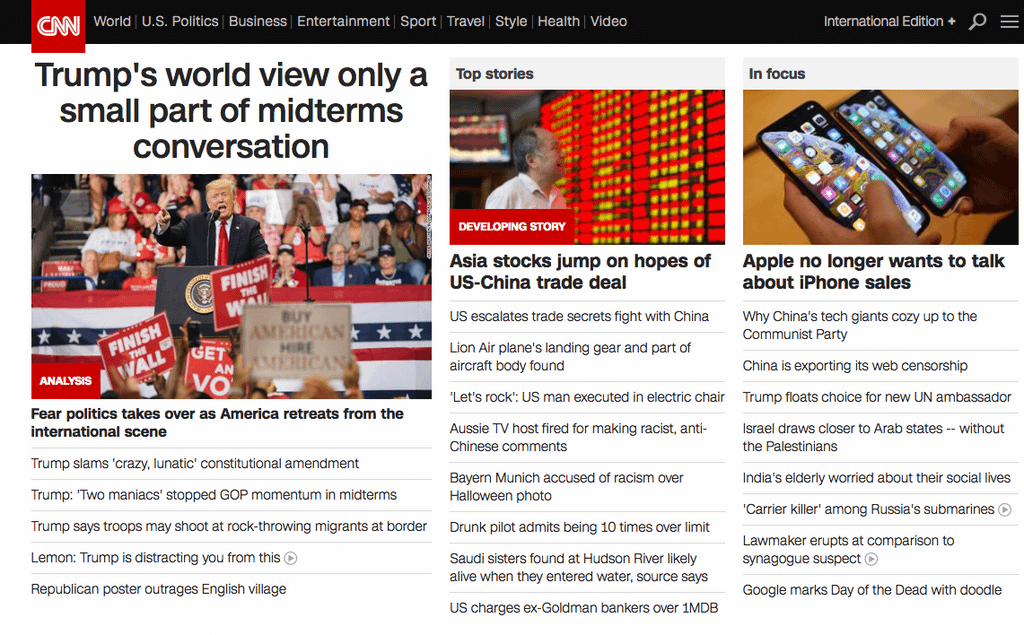 CNN still calls themselves “The Most Trusted Name in News” and then cite a survey from 2003! Obviously afraid to commission a survey that isn’t 15 years old.

TheHill: CNN boss: If we break away from Trump coverage ‘the audience goes away’

CNN President Jeff Zucker said his network’s audience would dwindle if its news programming shifted away from covering President Trump.

In an interview published in the latest issue of Vanity Fair, Zucker said the reason why CNN spends much of the day reporting on Trump’s day-to-day activities and his rhetoric is viewer demand.

“People say all the time, ‘Oh, I don’t want to talk about Trump, I’ve had too much Trump,’ ” Zucker told Vanity Fair. “And yet at the end of the day, all they want to do is talk about Trump.”

“We’ve seen that anytime you break away from the Trump story and cover other events in this era, the audience goes away,” he added. “So we know that, right now, Donald Trump dominates.”

Zucker said he wants CNN to be a home for both supporters and opponents of the president, despite harsh criticism of the news outlet from Trump and other Republicans.

“On MSNBC, you rarely hear from people who do support Trump,” Zucker said. “We want to be home to both those points of view.”

“It is true some of these folks are not very good with the facts, but that’s OK in the sense that it’s our job then to call them out,” he added.

CNN is projected to report its most profitable year ever, a source familiar told Vanity Fair, though it lags behind both Fox News and MSNBC in average prime-time viewership.

Donald Trump Jr. on Thursday suggested it was time for CNN to embrace a “new business model.”
“CNN’s audience went away anyway. That’s why their ratings are so bad,” he tweeted, adding that the network should focus on his father’s “amazing wins.”