Relying on fakery and addictive stimulus is the acme of fragility and vulnerability. 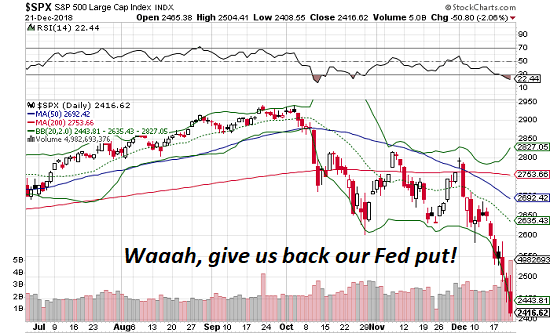 Having become addicted to the Federal Reserve’s nearly free money for financiers and the infamous Fed Put, stock market players are now weeping and thrashing about in the agony of withdrawal as Fed chair Jay Powell has instituted a cold-turkey withdrawal from the financial stimulus of the Bernanke-Yellen days.

Let’s be clear: the policies of nearly free money for financiers (QE) and the Fed Put were unmitigated disasters, as they distorted financial markets so severely that the markets’ pricing mechanisms have been crippled.

The policies of the Bernanke-Yellen Fed also directly exacerbated wealth-income inequality, as the wealth effect of rising equity valuations– the supposed goal of monetary stimulus– only benefited the top 5%, and most of the gains flowed to the top 0.1%.

Stripped of addictive stimulus and the backstop of the Bernanke-Yellen Fed Put, the markets are experiencing the pain of withdrawal and the traumatic return of price discovery. Although we’re taught that capital has financial, intellectual and social forms, trust is also a form of capital, and thanks to the gross distortions and perverse incentives of the Bernanke-Yellen Fed, nobody trusts the market’s price discovery mechanisms any more.

This is why market participants are so skittish and so easily panicked: they have no way of knowing what market valuations will be once the markets get through cold-turkey withdrawal from Fed smack and start discovering price via supply, demand, risk, cost of credit, discounting future cash flows, etc.–all the market mechanisms of transparent price discovery.

In effect, the Bernanke-Yellen Fed institutionalized the destruction of trust in U.S. markets in the pursuit of continued gains in equity valuations. Nobody trusted markets’ price discovery, but they trusted the Fed to bail out the stock market should any latent price discovery take markets lower.

Everybody knew it was fake, but it was too profitable not to drink the Kool-Aid. Just as the punter high on cocaine feels he can conquer the world while onlookers marvel at his disconnect from reality, the Bernanke-Yellen Fed offered up addictive stimulus that generated an illusion of stability and an illusion of price discovery, illusions no sober participant believed.

If the punter on coke starts handing out $100 bills, why not take some? That’s the Bernanke-Yellen Fed in a nutshell.

Addicts always think they can quit any time they choose. Stock market players reckoned they could discern when the Fed drug would wear off or trigger mass overdoses, and they’d exit the market with their gains well before things got out of hand. But the exit is small and the venue is cavernous and crowded: easier said than done.

Powell is trying to restore trust in the market by stripping it of the Bernanke-Yellen Fed Put. After a decade of addiction to Fed stimulus, it’s tough to surrender the delusional convictions of the addict and start engaging the world as it is, which in financial markets mean transparent price discovery of all things, including risk and credit.

If we can dare to be honest for a moment, we’d confess that everybody knew the markets of the past decade were fake. When people can no longer tell the difference between fakes and the real deal, fraud is incentivized as trust is lost.

We are circling the financial Black Hole: reliance on fakery and the destruction of trust in markets have systemic consequences. We should be grateful to Jay Powell and his Board of Governors for refusing to steer the U.S. financial system and economy into the Black Hole from which there is no return.

Relying on fakery and addictive stimulus is the acme of fragility and vulnerability. If we want an anti-fragile, adaptive and durable financial system and economy, we need to start dealing with reality, and the first step is to restore markets’ price discovery mechanisms, regardless of the short-term pain.