Now that the global trade war, started by United States President Donald Trump, is in full swing, many people want to learn the facts before passing judgement. Global trade is a complicated problem and it may be easier to understand the issue piecemeal. Take a look at the infographic below to see the countries that exported vehicles to the U.S. in 2017. 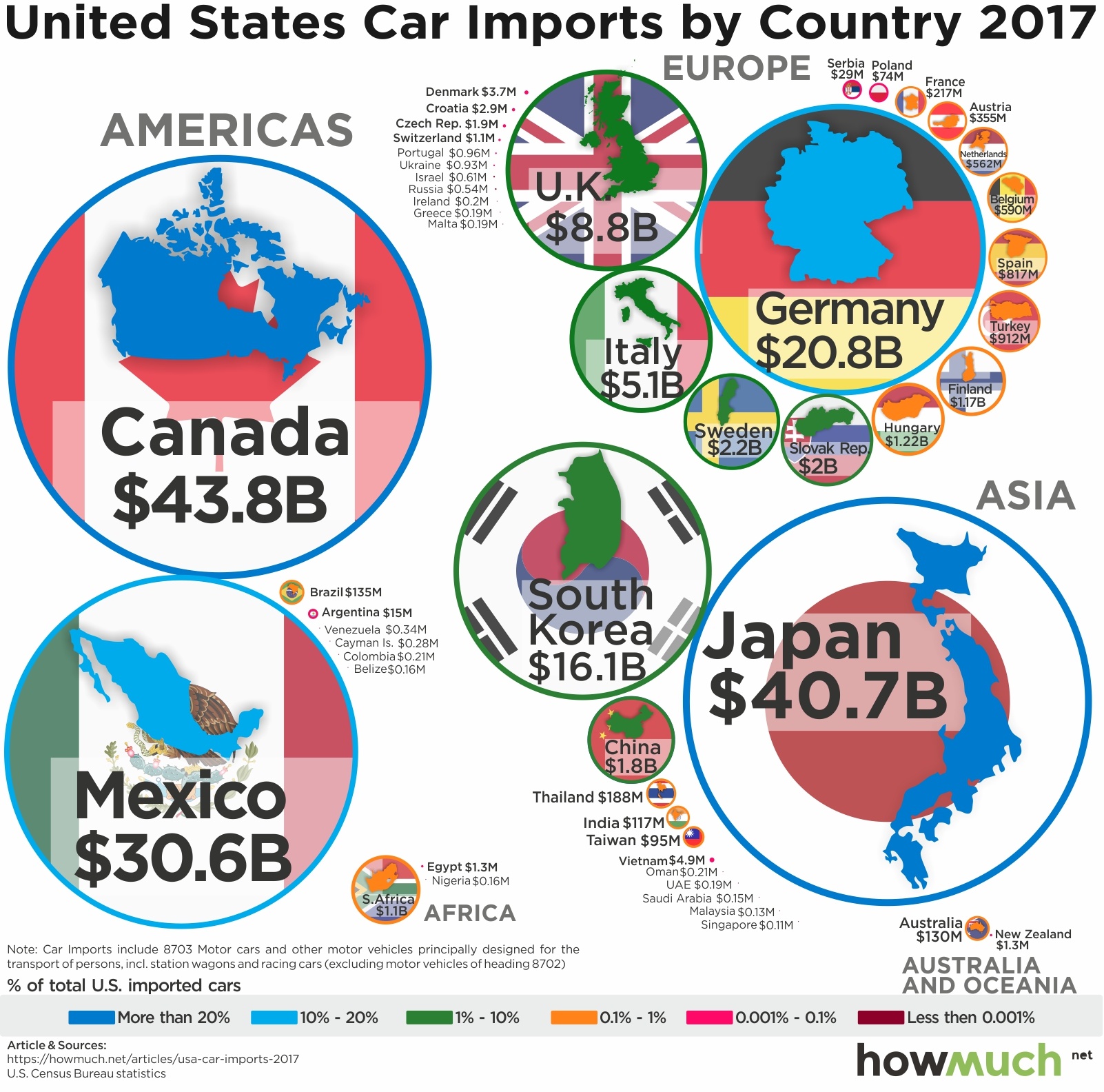 In the graphic above, every country that imported autos into the United States in 2017 is represented by a circle containing the flag and map of that country. The larger the value of vehicle exports to the U.S., the largest the circle of a country becomes. The data were collected from the International Trade Centre’s Trade Map and the U.S. Census Bureau.

The value of imports from Canada and Mexico are the first and third highest at $43.8 billion and $30.6 billion respectively. This may explain why President Donald Trump has been so eager to rewrite the North American Free Trade Agreement (NAFTA). The agreement used to allow auto manufacturers to move production facilities across North America and import vehicles back to the U.S. In order to qualify for a 0% tariff, a complicated set of requirements had to be met. Trump’s new U.S.-Mexico-Canada trade agreement, announced September 30, 2018, will incentivize automakers to build in the U.S. and stipulates that more parts must be sourced from North America.

Most of the countries on the infographic have large, advanced economies and can therefore manufacture and export high-quality vehicles to the United States. The one exception to the rule in Mexico, which is able to export vehicles to the U.S. because of NAFTA and the presence of U.S. automakers. Auto imports from Japan, known for its very high-quality vehicles, are worth the second most at $40.7bn. When taken as a whole, vehicle imports from the European Union in 2017 totaled around $43.3bn (€37.4bn), nearly tying for first place with Canada.

The majority of vehicles for sale in the United States come from foreign countries. Some will argue that lower tariffs will allow more imports from abroad and therefore more choices for consumers. Others will argue that higher tariffs should be used to promote domestic production and therefore more jobs for Americans. Either way, if you’re looking to support U.S. business by buying locally, it may be harder than you think to buy an all American car.