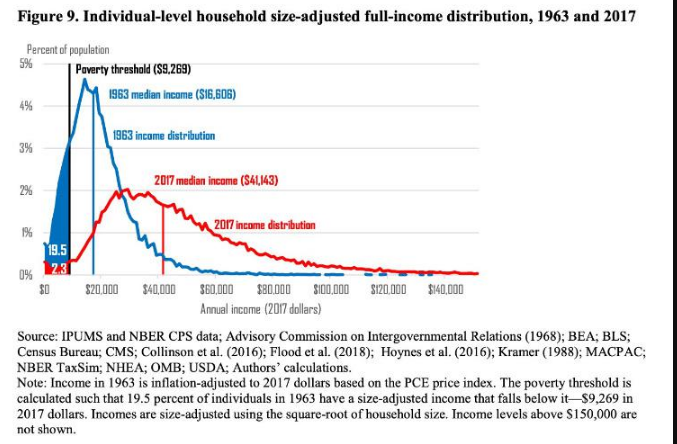 Here’s a link to the paper from the national bureau of economic research, it’s a very interesting read imo.

We evaluate progress in President’s Johnson’s War on Poverty. We do so relative to the scientifically arbitrary but policy relevant 20 percent baseline poverty rate he established for 1963. No existing poverty measure fully captures poverty reductions based on the standard that President Johnson set. To fill this gap, we develop a Full-income Poverty Measure with thresholds set to match the 1963 Official Poverty Rate. We include cash income, taxes, and major in-kind transfers and update poverty thresholds for inflation annually. While the Official Poverty Rate fell from 19.5 percent in 1963 to 12.3 percent in 2017, our Full-income Poverty Rate based on President Johnson’s standards fell from 19.5 percent to 2.3 percent over that period. Today, almost all Americans have income above the inflation-adjusted thresholds established in the 1960s. Although expectations for minimum living standards evolve, this suggests substantial progress combatting absolute poverty since the War on Poverty began.