According to the latest research from Counterpoint’s Q4 2017, Global handset profits declined 1% YoY in Q4 2017 (October-December) as the premium smartphone market did not grow as expected. We believe that the Global smartphone market has already reached its peak with longer replacement cycles and key smartphone OEMs are now under pressure to book profits.

Counterpoint Research Analyst, Karn Chauhan, highlighted, “Global handset profits declined 1% YoY, but Apple grew 1% YoY even with the iPhone X being available for only two months in Q4 2017. The iPhone X alone generated 21% of total industry revenue and 35% of total industry profits during the quarter and its share is likely to grow as it advances further into its life cycle. Additionally, the longer shelf life of all iPhones ensured that Apple still has eight out of top ten smartphones, including its three-year-old models, generating the most profits compared to current competing smartphones from other OEMs.”

Commenting on the performance of Chinese brands, Associate Director, Tarun Pathak, highlighted, “Chinese OEMs cumulative profits crossed 1.3 USD billion during Q4 2017. This was driven by the increased mix of mid to high end smartphones.In fact, the average selling price (ASP) of their flagship devices also increased YoY. Key Chinese players like Huawei, OPPO and Vivo are now looking to scale up the price band, by leveraging their in-house manufacturing capabilities and bringing innovation to their devices.” 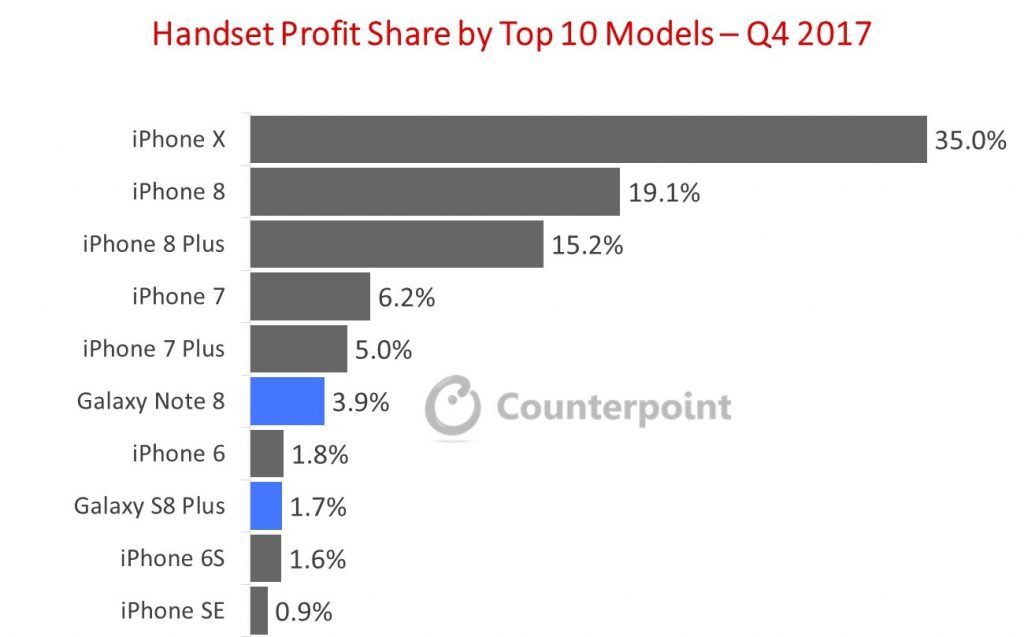