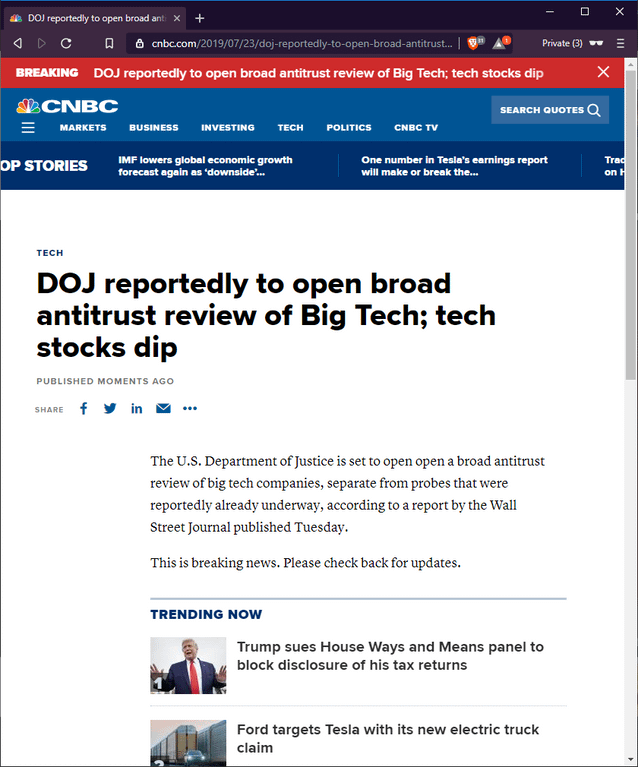 Just one week after the tech world’s most visible conservative and entrepreneur to back President Donald Trump, Peter Thiel, slammed “treasonous” Google for agreeing to work closely with China, trying to get its search engine back into the Chinese market, while deciding to let a US defense department contract that gave the military access to its artificial intelligence tools lapse, Thiel’s lament has made its way to the very top, and moments ago the WSJ reported that the DOJ was opening a broad antitrust review into whether dominant technology firms are unlawfully stifling competition, adding a new Washington threat for the FANGs

According to WSJ sources, the review is geared toward examining the practices of online platforms that dominate internet search, social media and retail services; the report notes that the new antitrust inquiry is “the strongest signal yet of Attorney General William Barr’s deep interest in the tech sector, and it could ratchet up the already considerable regulatory pressures facing the top U.S. tech firms.”

To be sure, the review, which is designed to go above and beyond recent plans for scrutinizing the tech sector that were crafted by the department and the Federal Trade Commission, has certainly spooked investors and the US mega tech names have promptly tumbled after hours, dragging the Nasdaq lower.

As the Journal adds, “the two agencies, which share antitrust enforcement authority, in recent months worked out which one of them would take the lead on exploring different issues involving the big-four tech giants. Those turf agreements caused a stir in the tech industry and rattled investors. Now, the new Justice Department review could amplify the risk, because some of those companies could face antitrust claims from both the Justice Department and the FTC.”

As we reported at the time, the FTC in February launched its own task force to monitor competition in the tech sector; that team’s work is ongoing.

Meanwhile, the DOJ will examine issues including how the most dominant tech firms have grown in size and might—and expanded their reach into additional businesses. The Justice Department also is interested in how Big Tech has leveraged the powers that come with having very large networks of users, government sources told the WSJ.

Moments after the WSJ report, the DOJ published a press release confirming, that “the Department of Justice announced today that the Department’s Antitrust Division is reviewing whether and how market-leading online platforms have achieved market power and are engaging in practices that have reduced competition, stifled innovation, or otherwise harmed consumers.”

The Department’s review will consider the widespread concerns that consumers, businesses, and entrepreneurs have expressed about search, social media, and some retail services online. The Department’s Antitrust Division is conferring with and seeking information from the public, including industry participants who have direct insight into  competition in online platforms, as well as others.

“Without the discipline of meaningful market-based competition, digital platforms may act in ways that are not responsive to consumer demands,” said Assistant Attorney General Mahan Delrahim of the Antitrust Division. “The Department’s antitrust review will explore these important issues.”

There a silver lining: according to the WSJ, unlike other government task forces which are, well, “tasked” in advance with a specific goal, there is no defined end-goal yet for the Big Tech review other than to understand whether there are antitrust problems that need addressing, but a broad range of options are on the table, and the “department’s inquiry could eventually lead to more focused investigations of specific company conduct,” officials said.