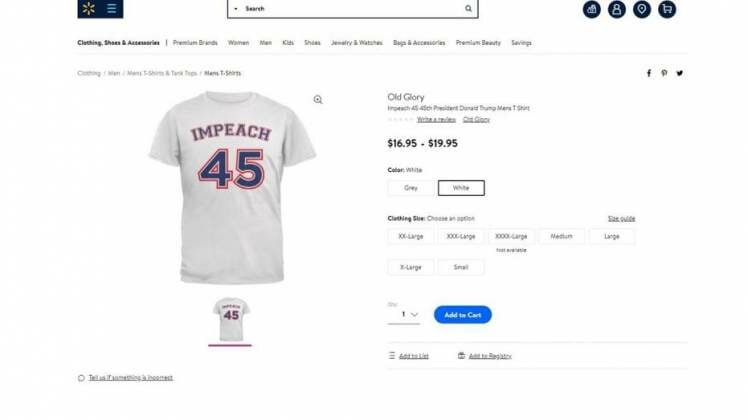 The story broke yesterday, and it’s gaining steam by the minute, hence today’s article is about one of the most recognizable American icons: Walmart. What’s up with boycotting Walmart (also known as China Central, since all their products are made in RPC), you asked? Well, tomorrow’s 4th of July, Independence Day and all that. And guess what Walmart chose to do during Independence Day week: they were selling anti Trump t-shirts. Hilarious, isn’t it?

.@walmart why are you selling Impeach 45 baby clothes on your website?????

What kind of message are you trying to send? t.co/PwI4nCVAZx

As per a FOX News report:

“Walmart has found itself on the receiving end of a torrent of outrage after it was discovered Monday that the superstore was selling anti-Trump “Impeach 45” apparel on its website. The outcry sparked a #BoycottWalmart trend on Twitter as users expressed their distaste for the chain promoting the impeachment of President Trump, echoing some Congressional Democrats. Ryan Fournier, chairman of the group Students for Trump, was one of the first to discover Walmart was selling the clothing item, according to the International Business Times. He asked the company in a tweet, “What kind of message are you trying to send?”

Funny thing, they were also selling baby onesies with “Impeach 45”. If you’re not from this planet, the historic war-cry “peach foti-fi” was made famous by Auntie Maxine Waters, the unhinged DEM leader. Walmart’s response was predictable, i.e. these items were sold by third parties, not by Walmart themselves, and they were subsequently removed from the “interwebz” following the public outcry from so-called conservatives.

Currently speaking, Walmart removed the entire section of “Impeach 45” merchandise from its website. Funny thing number 2: you can still buy these t-shirts from Amazon if one so inclined. But I guess no one would want to boycott Amazon. Prove me wrong.

READ  Aisle be back! Moment Walmart employee knocks customer out cold with one punch after being spat on

Speaking of Walmart and corporate culture, this is what these corporations do:  run all the local mom and pop stores out of business by under pricing them, and as soon as the competition is gone, you have little choice to “vote with your feet/dollars”. There are not many mom and pop businesses left, but I have committed to buying from small business owners locally whenever possible. Remember this: while explaining why he was joining Netflix, Barry Obama said we have to TRAIN the Next generation. NOT EDUCATE. You train dogs and sheep, not humans. This is the President who overturned a 30 year law to allow the government to use propaganda on its “subjects”. Why aren’t the Republican Congressman repealing that ;aw I wonder? Netflix is the new money  laundering system to replace the Clinton Foundation; if we had a real DOJ or AG, this would be outed- as would Barry.

Getting back to the Walmart story, it’s a dumb thing to politicize your business. You will lose at least 50% of your customers, if not more. Whomever thought this was a good idea should be immediately deported. Seriously speaking now, what has happened to freedom of speech? You don’t have to buy their products, or even shop at their stores, but this public outrage is kind of like Obama getting that rodeo clown fired for wearing a mask of him after the clown had worn the masks of all the other presidents.

READ  Walmart Will Give 740,000 Employees A Free Samsung Smartphone

Maybe conservatives are getting wound a little too tightly for their own good. I don’t buy Nabisco or bank with Chase or shop at Target, because those corporations took a stand in favor of immoral activity. This is just one person’s opinion, and Walmart has sold a whole lot of anti-Obama t-shirts in the past. Honestly, this is hardly worth the effort to complain about. I am considering turning in my NRA membership and my Republican Party membership if you guys can’t take a small thing like this without getting your panties in a wad. Snowflakes. Makes the entire conservative camp look like children huffing and puffing about what – someone else’s God-given right to free speech?!? Good luck with that.

I call it fascism, and that’s exactly what the “snowflake” left is doing in the US for years, the SJW movement and all that crap. And it’s wrong, regardless on whose side you are. Besides that, there are much, much larger issues to deal with. If a group can tell a company what it can or cannot sell, that is just plain wrong, as long as that product does not endanger anyone’s safety in anyway. How is this t-shirt hurting anyone? Your feelings are hurt?

Walmart is just gaming the system to benefit THEIR bottom line, just as Trump has admitted to doing. They don’t make the rules, they both just exploit them to their advantage. So, are they both right or are they both wrong? You choose.