All of Wall Street belongs in prison.

Life in Clown World has never been stranger.  This article caught my attention yesterday:

Tesla shares are up about 5% in pre-market trading Monday after ARK Invest’s Cathie Wood released a “new and improved” price target on the company of $3,000 per share at the end of the week last week. Last week was an eventful week last week for those watching the perpetual saga that is Tesla motors. At right about the same time the stock’s – err, company’s – biggest fan wound up releasing a new financial “model” with a new astronomical price target on the name, Elon Musk withdrew the company’s latest Full Self Driving beta v8.2 after it was absolutely thrashed by critics like Road and Track who called it “laughably bad” and “potentially dangerous”.

“If you think we’re anywhere near fully autonomous cars, this video might convince you otherwise,” Road and Track wrote about Tesla’s Full Self Driving feature. The article referred to the feature as “morally dubious, technologically limited, and potentially dangerous”. 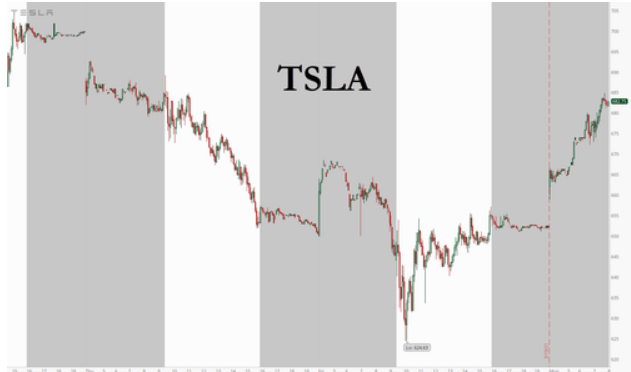 The video shows what would otherwise be called a comedy of errors, but for how dangerous the Full Self Driving beta could actually be.

“It appears hapless and utterly confused at all times, never passably imitating a human driver,” Road and Track wrote.

The article then goes on to list how, exactly the Tesla “breaks a variety of traffic laws”, “nearly slams into a Camry”, has another “near collision” and, at one point, “drives into the oncoming lane”.

Wood also released a new financial model and price target for Tesla, calling for the stock to hit $3,000 by the year 2025. That would be a pre-split price target of $15,000 and a market cap of almost $3 trillion. As part of her new model she said there is a “50% chance of Tesla achieving fully autonomous driving within five years,” according to Bloomberg. Her “bear case” on the stock is $1,500, a more than 2x from the company’s current share price.

Can anyone rationally explain this?

“Tesla booked a whopping $1.58 billion of revenue from selling regulatory credits last year, more than the previous three years combined. Tesla’s net income of $721 million in 2020 turns into a substantial loss if those regulatory credit sales are backed out”

Here’s a question: without endless tax credits and government subsidies, has Tesla ever made a profit?? And I don’t mean selling carbon credits or Bitcoin pump and dump schemes on Twitter.

With a PE > 1000 and industry standard at around 10, Tesla stock should trade closer to the $50 in any realistic view of the world. Remove subsidies and you have a price significantly lower than that.

Not all people are crazy though.

Do you want a Tesla Model S that hasn’t changed in ten years, or a Polestar 2?

Is Tesla really worth $700 billion when the competition eclipses anything they have? What hope does Tesla have against this?

The direct competitor to the Model 3 and Y will eat Tesla’s lunch in Europe.

It is just an early entry, but if Honda goes full into the EV race, Tesla won’t be able to touch them. Better looking than anything Musk has crapped out, and far more practical for most city dwellers.

Geely and NIO are already decimating Tesla in China and now Geely is going to launch a luxury EV brand to take on the Model S and X.

Tesla is worth almost as much as the entire global auto industry combined and has nothing in their product portfolio to match what is coming from everyone else.

The ARK BS was written up in ten minutes to give cover for the cancellation of full self-driving. Tesla as a car company is over. Sadly, the stock will probably triple when Elon announces bankruptcy.

Tesla is the Yugo of Electric Cars!

Now, it’s true that any price target is possible with hyperinflation. In a fascist economy all surviving companies are like Tesla. I seriously hope this ARK fund collapses and dipshit Kathy gets sued back to the Stone Age by clients. They invested in some real garbage companies.

All you have to do is go to ARK’s web site and look at its team of analysts. These kids should be on spring break, not ruining the lives of investors.

Their only interest is “betting” and the very short return of capital with parasitic systemic gains without worrying about long-term damage.

It’s a terminal explosive mixture. It also applies to genetic research, and you have seen the results every time you put on the “mask”.

In closing, BTC is even more overvalued than is TSLA. At least Tesla has a handful of parts that are worth something and a Tesla car actually works, as in it does something.

Bitcoin has zero intrinsic value. There are loads of electronic fiat currencies out there, and a new one comes online every single day.